As I was writing a post the other day I was trying to find an article in my archive that I wanted to link to. While searching I happened upon the first post I had ever written on this site way back in January of 2008.  That post announced the launch of the site, and talked about what topics I hoped to be covering.

It was only after finding that post that I realized that Bible Money Matters is now officially 10 years old! 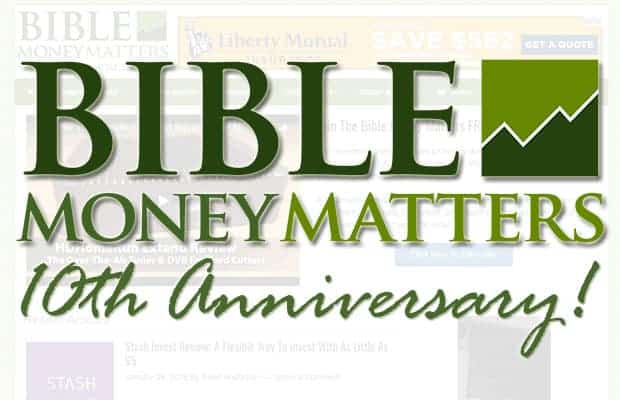 I’ve been publishing this site for an entire decade! What?  How is that possible?

Some Numbers – Behind The Curtain

I think it’s fun to take a quick look back and think about all that has happened on this site since it was launched.

When I first launched Bible Money Matters I had hopes that it would one day have good traffic, help people improve their finances, and even make me a little money in the process. I never could have imagined just how much it would change my life.

So let’s take a look at this site over the years, by the numbers.

It’s crazy to think that the articles I’ve written on my small site have been viewed literally millions of times.

It’s also extremely humbling to know that I’ve been able to make even a small impact, and help people who are in a tough spot. I’ve gotten quite a few emails over the years from people thanking me for a particular article, or for how a certain post helped them with a problem they were struggling with.

I am so appreciative of those emails because it has given me a boost for when traffic isn’t as good, or when income on the site has dropped. There have been times when I wasn’t sure if I should continue the site, but your encouraging words helped immensely.

So what is the origin of Bible Money Matters? At the end of 2007 I was just starting to pay more attention to our household finances, and in the process I started reading personal finance blogs.

Blogs had been around since the mid to late 90s, but really took off in the early 2000s. By 2007 when I first started paying attention there were quite a few personal finance blogs, some of which inspired me to start my own.

Among my favorites back then were Free Money Finance, Get Rich Slowly, Consumerism Commentary and Gather Little By Little.  All four are still around in one form or another.

In 1999, according to a list compiled by Jesse James Garrett, there were 23 blogs on the internet. By the middle of 2006, there were 50 million blogs according to Technorati‘s State of the Blogosphere report.  (source)

Bible Money Matters first article was published on January 21st, 2008.  I remember that I messed around and published a few posts on the site before I officially launched a week or so later. Here’s what the site looked like back then: 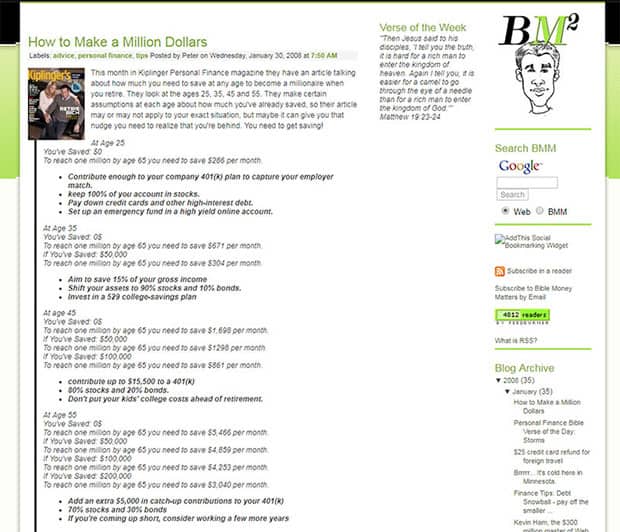 The site was originally published on Google’s Blogger.com, which was pretty popular with newer bloggers back then. Most people started their sites either on Blogger or on WordPress, and I started on Blogger because it was free. I wasn’t sure how long I would be doing this blogging thing. Why not just dip my toes in the water first, and see if I enjoyed blogging?

After publishing my first posts in January and February of 2008, I decided that I wanted to continue the project, and I ended up buying the actual domain name for the site, instead of continuing to use the “biblemoneymatters.blogspot.com” URL.

After looking at all of my blogging heroes back then, I saw that a lot of them were publishing multiple posts on a daily basis, or at least once a day.  So I decided to publish a post on every weekday.  I kept at that pace for the first couple of years of the site’s existence. While not all of the posts were gems, I believe that creating as much content as I did made me a better writer and gave me a boost in the search engines, which helped to grow the site faster.

Within the first few days of launching I decided to start trying to monetize the site.  Adsense ads were up on the site almost from the start, and later on added other CPM ads. I sold sponsorships on the site and sold text links before it was frowned upon by Google. I took part in affiliate relationships and wrote reviews of financial products.

Within the first 3 months I was able to cash out my first $100 deposit from Google for my Adsense ads. I was ecstatic!

At first my goal with the site was to make enough money in order to pay a $200/month car loan that I had at the time. But very quickly I was making $3-400/month from the site. After that I saw bloggers who were making $1500/month or more and were paying their mortgages using the money they made. That was my next goal.  To pay my mortgage.

Within the first 6-8 months I was reaching that goal as well.  By the end of my 2nd year as a blogger I was making enough with my site in order to replace my wife’s day job income. That came at an opportune time as my wife got pregnant at the end of 2009, and in June of 2010 she had our son, Carter. 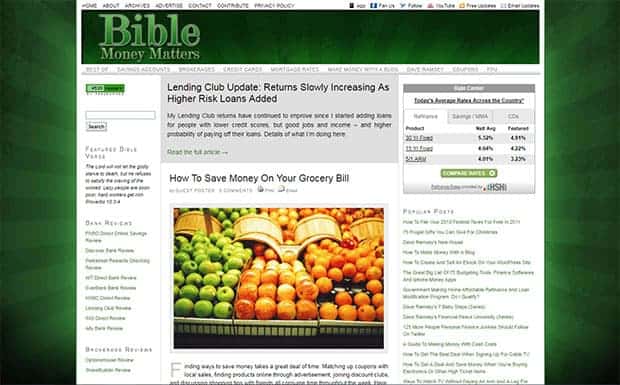 In February of 2011 Google search released something called the Google Panda update. It affected a lot of personal finance sites and caused their traffic to drop. At first my site didn’t seem to be affected, and it kept humming along. Then in April of 2011 after another Panda update, overnight the traffic to my site dropped by over 60-70% or more.

The income I was making from the site dropped along with the traffic, and at the time it sent me into a bit of a depression. What can you do when Google is your #1 source of traffic, and then they just take it all away?

Thankfully I had some good friends in the blogging world including Phil with PTMoney.com (founder of FinCon), Tom of MapleMoney.com, Glen of FreeFromBroke.com,  and a host of others. Together we all tried to figure out what we needed to do to improve our search rankings, and get our traffic back. We optimized, cleaned up our sites, and worked on getting more legitimate backlinks. That year FinCon was also launched, making it even easier to commiserate with like minded personal finance bloggers. The community of bloggers really helped me to keep faith.

It was a long process, but over the next couple of years, the traffic slowly started to improve, and the income started to come back.

While it was a discouraging thing to lose most of the site traffic all at once, it was definitely a character building journey. Being able to stick with it and see things improve, and then finally get back to a place where the traffic and income are better than they ever were, was extremely rewarding. 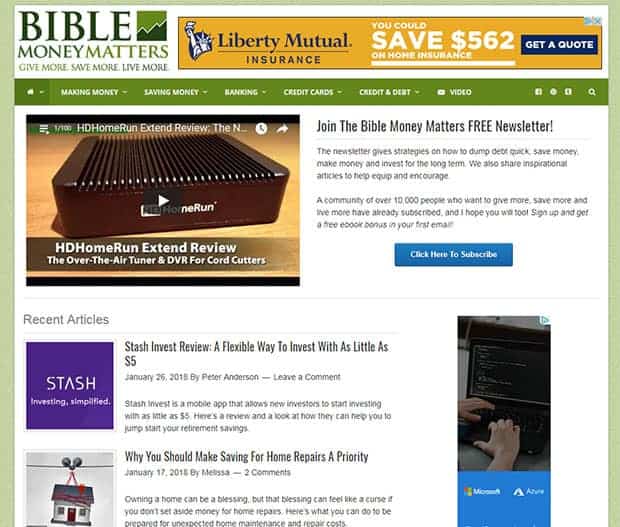 After all of the changes that I made, these past few months have been my best traffic months ever. This past month, January 2018, was my highest traffic month of all time (except for one month a couple of years ago where I had over 500,000 page views due to a Dave Ramsey post going viral on Facebook).

Things That Have Happened In The Past Decade

Over the past 10 years a lot of things happened, both in the real world, and in my life.

It’s been a crazy decade for sure, and our world, and the world around us, has had it’s ups and downs.

Having this site has helped me to be more accountable in our financial lives, which in turn has prepared me to be more of a help to others. I thank God that he inspired me to start this journey 10 years ago.

So to cap this anniversary post off, here’s a look at bunch of the articles that we’ve published over the years.

Thank You For 10 Crazy Years!

It’s hard to believe that 10 years has already gone by, and I can’t tell you how thankful I am that so many of you have stuck with Bible Money Matters over the years.  For those of you who have only discovered the site recently – welcome! I hope you’ll stick around for the second decade that we’re just starting!

Thank you and God bless!

And God is able to bless you abundantly, so that in all things at all times, having all that you need, you will abound in every good work. – 2 Corinthians 9:8

Share32
Pin4
Tweet
Share2
38 Shares
Last Edited: 2nd February 2018 The content of biblemoneymatters.com is for general information purposes only and does not constitute professional advice. Visitors to biblemoneymatters.com should not act upon the content or information without first seeking appropriate professional advice. In accordance with the latest FTC guidelines, we declare that we have a financial relationship with every company mentioned on this site.

Previous Post: Stash Invest Review: A Flexible Way To Invest With As Little As $5
Next Post: How To Lose Weight With The Diet Bet: Is It The Right Tool For You?