A few months ago I wrote a post that discussed the topic of whether or not Christians should use debt, and whether or not it was a sin to use debt.  The conclusion I came to in that post was that the Bible frowns upon debt and warns of the dangers of debt, but that it doesn’t necessarily say you should never use debt.

In the comments on that post another related topic came up.  The question was whether or not Christians should ever lend money, and if they do, whether or not they should charge interest.

This is a topic that I’ve looked into a bit over the past couple of years because as you know I’ve been investing in Lending Club for the past few years.  With Lending Club you’re essentially lending money to other people, with an interest rate associated with your loans.

So today I thought I’d talk about Christians and lending, and whether I believe it’s OK for a Christian to lend.

Doesn’t The Bible Say That The Borrower Is Slave To The Lender? 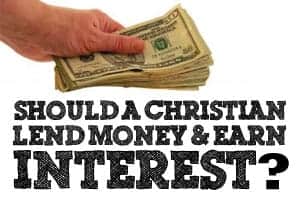 I think a lot of people’s first reaction to the question “should Christians lend money”, is that Christians should not in fact lend money.  After all, there are a lot of verses in the Bible warning us of the dangers of debt.

The rich rule over the poor, and the borrower is slave to the lender. Proverbs 22:7

No one can serve two masters, for either he will hate the one and love the other, or he will be devoted to the one and despise the other. You cannot serve God and money. Matthew 6:24

Do not be one who shakes hands in pledge or puts up security for debts;if you lack the means to pay, your very bed will be snatched from under you. Proverbs 22:26-27

It is better not to make a vow than to make one and not fulfill it.  Ecclesiastes 5:5

These verses are only the beginning, we’re warned about the dangers of debt time and again.  The thing is, the Bible doesn’t say that debt is a sin, or that you should never lend.  In fact there are verses that talk about lending money and receiving interest in a positive light.

Lending Money Can Be A Blessing

In the Bible there are multiple references to people lending money or giving money, and it is shown that it can be a great blessing in many cases.

Well then, you should have put my money on deposit with the bankers, so that when I returned I would have received it back with interest.  Matthew 25:27

Rather be openhanded and freely lend him whatever he needs. Deuteronomy 15:8


They are always generous and lend freely; their children will be blessed. Psalm 37:26


It is well with the man who is gracious and lends; he will maintain his cause in judgment. Psalm 112:5

And if you lend to those from whom you expect repayment, what credit is that to you? Even ‘sinners’ lend to ‘sinners,’ expecting to be repaid in full.  Luke 6:34

While the Bible does speak of lending money in a positive light, it also gives warning to not lend at interest to those who are poor or who are unable to repay.  It speaks of lending freely, but it warns us against being greedy, and exhorts us to act with justice.

I think that we also need to take into account how times have changed, and how borrowers have much more protection under the law today. In ancient times being in debt and not repaying could lead to becoming a slave, or completely having your freedom taken away from you.  It wasn’t a pretty picture.  In modern times borrowers have many more protections under the law, which mean that they won’t end up being a literal slave, not be able to eat, or be taken advantage of without any legal recourse.

Lending With The Wrong Heart

I think the problem for Christians with lending and earning interest comes in when we are lending money with the wrong heart, and we’re not lending to help people or improve their situation, but we’re being greedy and taking advantage.  In other words, we’re not acting out of compassion or to be a blessing, but simply thinking about the money.

Multiple verses talk about not taking advantage of the poor or less fortunate when lending.

“‘If any of your fellow Israelites become poor and are unable to support themselves among you, help them as you would a foreigner and stranger, so they can continue to live among you. Do not take interest or any profit from them, but fear your God, so that they may continue to live among you. You must not lend them money at interest or sell them food at a profit. Leviticus 25:35–37

For what does it profit a man to gain the whole world, and forfeit his soul? Mark 8:36

If you lend money to My people, to the poor among you, you are not to act as a creditor to him; you shall not charge him interest. Exodus 22:25

I think that we all need to be careful about the lures of money, and examine our hearts to ensure that we’re not lending money for the wrong reasons, and that we’re not setting our hearts on the interest that we might be earning.

Making Sure Lending Comes From The Right Place

When lending money I think it’s important to consider whether you’re being a blessing, or if you’re doing something that isn’t helpful in the end.  Some questions you can ask your self to make sure you’re acting from a good place:

Of course I think it’s also important to be in relationship with Jesus Christ on a daily basis by being in His word, and praying about the decisions you’re making. If you’re not properly grounded in your faith you’re much more likely to act in ways that you shouldn’t.

With all that said, I do believe it is possible for a  Christian to lend money, earn interest and still be a blessing to others through their loan.

So what are your thoughts? Do you think that Christians should lend money? Should they charge interest?

Share184
Pin4
Tweet28
Share3
219 Shares
Last Edited: 12th March 2013 The content of biblemoneymatters.com is for general information purposes only and does not constitute professional advice. Visitors to biblemoneymatters.com should not act upon the content or information without first seeking appropriate professional advice. In accordance with the latest FTC guidelines, we declare that we have a financial relationship with every company mentioned on this site.

Previous Post: Motif Investing: You Can Now Customize A Motif Or Create Your Own Custom Bundle Of Stocks
Next Post: What Is A Custodial Savings Account And What Are The Pros And Cons?