I‘ve never been someone who really cared about what they drive, or who felt like they needed to drive a certain type or brand of car in order to appear successful.  I just don’t care that much about my car, it’s just a tool to get from point A to point B. As such I’ve always driven reliable used cars, and our last few cars have been paid for in cash.  We haven’t bought any prestige or luxury brands of cars, probably because to us a prestigious car is the one that doesn’t have a monthly payment.

When you look at the data around what cars those with a high net worth own, you would find that a lot of them do own so called luxury or prestige brands, but it may not be as many of them as you might think.

Perceptions Of Cars And Wealth

Our perceptions of what a rich person would do or drive, is much different from what the reality is.  Thomas J. Stanley wrote on a post on his site:

In a study of more than 2,000 respondents, The Wall Street Journal  found that 35% believed that in order to qualify as being rich a person must drive a car that costs $75,000 or more.  If I applied this $75,000 threshold to the millionaires whom I surveyed, more than 90% would fail to qualify.

While it is true that people who have a high net worth are much more likely to own a luxury or prestige brand of car, it isn’t the majority of the wealthy.

In his book Stop Acting Rich author Thomas J. Stanley Ph.D. tell us that the median price paid by millionaires for their cars was less than you might think.

So millionaires on average aren’t all buying high priced luxury vehicles.  In fact, over 60% of them are buying lower status but reliable vehicles according to Joann Muller from Forbes.com:

But what that analysis also told me was that 61 percent of people who earn $250,000 or more aren’t buying luxury brands at all. They’re buying the same Toyotas, Hondas and Fords as the rest of us.


So while you might expect those with higher incomes to own more luxury brands of vehicles just because they have more money to spend on them, over 60% of them don’t own prestige brands. They’re driving many of the same cars that the rest of us do, the Toyotas, Hondas and Fords. 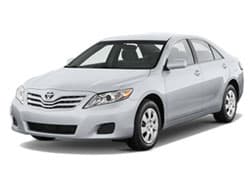 Stanley found in his research that Toyotas were the most popular recently purchased vehicle for the millionaires he surveyed.

In Stop Acting Rich, I mentioned that Toyota was the number one make of motor vehicle most recently acquired by millionaires.  More than one in ten drive Toyotas; among millionaire engineers it’s one in four!


So millionaires were most likely to buy Toyotas, which were shown by Consumer Reports to be the most reliable vehicle after 5  years of ownership.   Millionaires buy for quality and value.

Thomas Stanley extrapolated some numbers from what the Forbes study found.  He found it interesting just how many people who don’t have high incomes are still buying the luxury brands.

I estimate that there are 2.5 million households or nearly 2.2% of the total that have annual realized incomes of $250,000 or more.  Using Ms. Muller’s estimates that 39% of “the rich” buy luxury brands, one can estimate the number who do so, approximately 975,000.  Ah, but this population is much smaller than those households who drive prestige makes but have annual incomes under $100,000.  About 30 million households have annual incomes in the $50,000 to under $100,000 bracket alone.  Translated:  8% of 30 million = 2.4 million who are buying luxury cars but are not in the so-called “rich” category.  This population is nearly 2.5 times the size of the high income/luxury vehicle buyer.

Could it be that it is the pseudo affluent, the aspirationals, who are keeping the manufacturers of prestige makes of motor vehicles in business?

To me that says something about how so many people are aspiring to appear wealthy and are behaving in a way that they think wealthy people act, when in fact a majority of the wealthy don’t buy those luxury brands or spend as much money on a depreciating asset as they are.

Millionaires buy for quality and reliability, while also appreciating a good value. Those are some of the values that helped them to attain their wealth, not the values that say you need to show status symbols to others to prove your wealth, before you actually attain it.

What are your thoughts on the myth versus reality when it comes to luxury car ownership? Does it surprise you that most luxury car owners aren’t wealthy, or what most millionaires actually drive?

Share95
Pin4
Tweet62
Share14
175 Shares
Last Edited: 7th August 2012 The content of biblemoneymatters.com is for general information purposes only and does not constitute professional advice. Visitors to biblemoneymatters.com should not act upon the content or information without first seeking appropriate professional advice. In accordance with the latest FTC guidelines, we declare that we have a financial relationship with every company mentioned on this site.