Easter is probably my favorite holiday because of the significance it holds for me as a Christian.

It is the day we remember the rising of our Lord and Savior, Jesus Christ. It’s the day he triumphed over the grave, saved us from our sins, and gave meaning to our world.  Without his rising from the grave, all the rest of it would be meaningless.  He triumphed over death and gave us life!

To celebrate the day I thought I would share some quotes about Easter and the resurrection to help make us think as we celebrate with family and friends.

30 Quotes About Easter And The Resurrection

God proved His love on the Cross. When Christ hung, and bled, and died, it was God saying to the world, ‘I love you.’
– Billy Graham

Jesus said to her, “I am the resurrection and the life. The one who believes in me will live, even though they die; and whoever lives by believing in me will never die. Do you believe this?”
– John 11:25-26

Easter says you can put truth in a grave, but it won’t stay there.
– Clarence W. Hall

I believe in Christianity as I believe that the sun has risen: not only because I see it, but because by it I see everything else.
– C.S. Lewis

The devil, darkness, and death may swagger and boast, the pangs of life will sting for a while longer, but don’t worry; the forces of evil are breathing their last. Not to worry…He’s risen!
– Charles R. Swindoll

The resurrection completes the inauguration of God’s kingdom. . . . It is the decisive event demonstrating that God’s kingdom really has been launched on earth as it is in heaven. The message of Easter is that God’s new world has been unveiled in Jesus Christ and that you’re now invited to belong to it.”
–  N.T. Wright

A man who was completely innocent offered himself as a sacrifice for the good of others, including his enemies, and became the ransom of the world. It was a perfect act.
– Mahatma Gandhi

The great gift of Easter is hope – Christian hope which makes us have that confidence in God, in his ultimate triumph, and in his goodness and love, which nothing can shake.
– Basil Hume

because, if you confess with your mouth that Jesus is Lord and believe in your heart that God raised him from the dead, you will be saved.
– Romans 10:9

Immanuel, God with us in our nature, in our sorrow, in our lifework, in our punishment, in our grave, and now with us, or rather we with Him, in resurrection, ascension, triumph, and Second Advent splendor.
– Charles H. Spurgeon

Our Lord has written the promise of resurrection, not in books alone but in every leaf of springtime.
– Martin Luther

For what I received I passed on to you as of first importance: that Christ died for our sins according to the Scriptures, that he was buried, that he was raised on the third day according to the Scriptures, and that he appeared to Cephas, and then to the Twelve. After that, he appeared to more than five hundred of the brothers and sisters at the same time, most of whom are still living, though some have fallen asleep.
– 1 Corinthians 15:3-6

We are adopted into God’s family through the resurrection of Christ from the dead in which he paid all our obligations to sin, the law, and the devil, in whose family we once lived. Our old status lies in his tomb. A new status is ours through his resurrection.
– Sinclair B. Ferguson

Now if we died with Christ, we believe that we will also live with him. For we know that since Christ was raised from the dead, he cannot die again; death no longer has mastery over him. The death he died, he died to sin once for all; but the life he lives, he lives to God. In the same way, count yourselves dead to sin but alive to God in Christ Jesus.
– Romans 6:8-11

In short, I didn’t become a Christian because God promised I would have an even happier life than I had as an atheist. He never promised any such thing. Indeed, following him would inevitably bring divine demotions in the eyes of the world. Rather, I became a Christian because the evidence was so compelling that Jesus really is the one-and-only Son of God who proved his divinity by rising from the dead. That meant following him was the most rational and logical step I could possibly take.
– Lee Strobel

Two thousand years ago, in the Middle East, an event occurred that permanently changed the world. Because of that event, history was split. Every time you write a date, you’re using the Resurrection of Jesus Christ as the focal point.
– Rick Warren

We live and die; Christ died and lived!
– John Stott

We know that Christ, being raised from the dead, will never die again; death no longer has dominion over him.
– Romans 6:9

Because of the empty tomb, we have peace. Because of His resurrection, we can have peace during even the most troubling of times because we know He is in control of all that happens in the world.
– Paul Chappell

The truth of the resurrection gives life to every other area of gospel truth. The resurrection is the pivot on which all of Christianity turns and without which none of the other truths would much matter. Without the resurrection, Christianity would be so much wishful thinking, taking its place alongside all other human philosophy and religious speculation.
– John MacArthur

Let us consider this settled, that no one has made progress in the school of Christ who does not joyfully await the day of death and final resurrection.
– John Calvin

The resurrection is not merely important to the historic Christian faith; without it, there would be no Christianity. It is the singular doctrine that elevates Christianity above all other world religions.
– Pastor Adrian Rogers

Whoever reads the New Testament seriously, or gives thought to the impact which the apostles made upon their generation, must acknowledge that one outstanding historic event alone spurred that small band of 11 ordinary men to an amazing task of evangelization in their generation. Defying every obstacle, loss of home, persecution, even death itself, they evidenced the supreme relevance in their ministry of the resurrection of Jesus Christ.
– Erling C. Olsen:

The atonement, or forgiveness of sin once and for all achieved on the cross, weighs in, and heavily. But the atonement is confirmed, ratified, sealed, and made enduringly good by virtue of Christ’s rising from death. Our justification hinges on a risen life, present in us now because Christ is present with us now.
– Paul F.M. Zahl

He Is RISEN! He is Risen indeed! 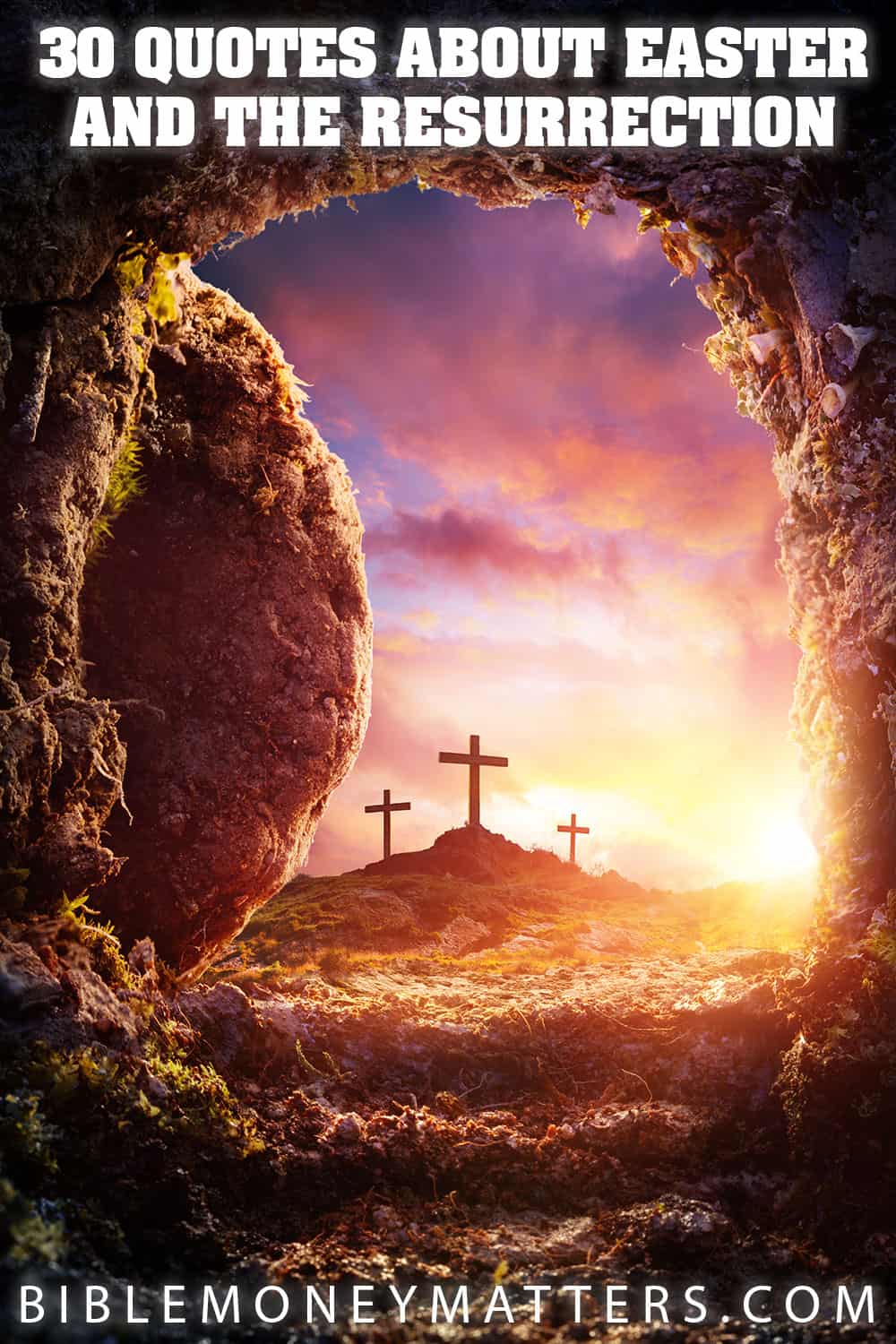 Share239
Pin28
Tweet30
Share6
303 Shares
Last Edited: 16th April 2022 The content of biblemoneymatters.com is for general information purposes only and does not constitute professional advice. Visitors to biblemoneymatters.com should not act upon the content or information without first seeking appropriate professional advice. In accordance with the latest FTC guidelines, we declare that we have a financial relationship with every company mentioned on this site.

Previous Post: How To Get Free Stock: 15 Companies That Will Give You Free Shares
Next Post: Axos Self Directed Trading Review: Invest, Trade Stocks For Free