A while back I wrote a review of The Millionaire Next Door by Thomas J. Stanley in which I explored his finding that millionaires and high net worth individuals have some basic attributes in common when you examine their lives.  His seven attributes of high net worth individuals give a picture of what people who have attained a high level of success have to do and how they behave to get there.  The attributes signal behaviors and attitudes that will beget future success.

He found that high net worth individuals usually live well below their means, are efficient with their time, value financial independence and are very likely to not have received a boost or economic help from their parents.   They are independent achievers who don’t need to rely on anyone for an economic leg up. 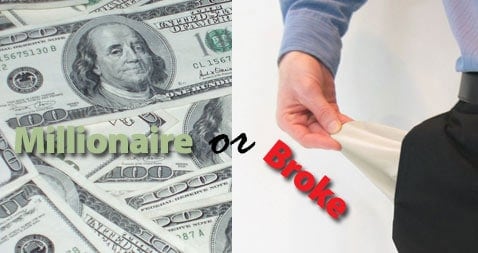 So are you behaving like a future millionaire, and would your habits and behaviors line up nicely with high net worth individuals?  Or will you end up broke?

How Much To Save To Become A Millionaire

So what does it take to become a millionaire?  In purely dollars and cents, if you started with zero dollars, and assuming an 8% return over the years you would need:

So depending on how early you start and how long you have to harness the power of compound interest, the amount you’ll need to save will vary pretty substantially.  In most cases, becoming a millionaire is very realistic – as long as you live like one.

Behaviors And Habits Of Millionaires

So now that you know the dollars and cents, what behaviors,  habits and attitudes will you need to have in order to become a high net worth individual? Stanley outlines things that people need to expect to do in order to be prodigious accumulators of wealth (PAW):

So to become a millionaire you need to be a focused individual who sets goals, takes advantage of opportunities, doesn’t rely on the aid of others and who lives a frugal and decidedly less consumeristic lifestyle.  So are you ready to emulate those millionaire behaviors?

Aiming To End Up Broke

So what are some warning signs that you might not be on the right path, and that you’re headed down the path to being broke?

The warning signs may not be apparent to you right away, but if you examine your life, your behaviors and your bank account it will usually become clear that you’re headed down the wrong path. Turn back before it’s too late!

Turning Things Around To Behave Like A Future Millionaire

So if you’re in a spot right now where you know you’re headed towards a bleak broke future, what can you do?  In most cases you’ve probably still got time to turn things around and head towards a brighter future, even if you don’t have time to become a millionaire.   Do a budget, start living below your means, stop buying things that aren’t absolutely necessary, start saving as much as you can, and spend your time wisely in ways that promote building your nest egg.   The sooner you get started, the brighter your future will be!

Are you behaving like a future millionaire, or are you headed down the deep dark path to being broke?

Share61
Pin45
Tweet60
Share18
184 Shares
Last Edited: 1st October 2014 The content of biblemoneymatters.com is for general information purposes only and does not constitute professional advice. Visitors to biblemoneymatters.com should not act upon the content or information without first seeking appropriate professional advice. In accordance with the latest FTC guidelines, we declare that we have a financial relationship with every company mentioned on this site.

Previous Post: 6 Bad Personal Finance Habits To Avoid Teaching Your Kids
Next Post: SaveUp.com Review: A Rewards Program That Encourages People To Save And Pay Off Debt