In his book, The Millionaire Next Door, Thomas J. Stanley explains how his research has found that individuals who have attained a high net worth have quite a few things in common.  In particular, they were found to have these 7 basic attributes in common.  According to Stanley, if you can emulate them, you too can become wealthy. 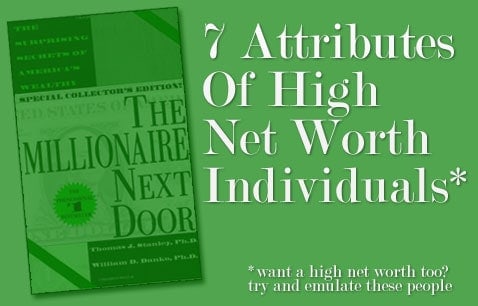 7 Attributes Of High Net Worth Individuals

These 7 attributes of high net worth individuals really expose the framework for living a life based on sound financial principles.  The attributes prove that it is possible to live well  on much less than you make, and have plenty left over to save, invest and give.   It can even be done by individuals who don’t make a lot of money, as long as they are disciplined.

The attributes speak to the power of educating yourself and your children about money, and practicing sound money management through the use of budgets and financial plans.   They show that displaying high social status often means that you won’t be financially secure.  (That’s funny in a way, isn’t it?).  The attributes  show how money is a tool to be used, and should not be an end in itself.  Those who understand that are often happier, and in the long run, wealthier.

Share52
Pin183
Tweet35
Share14
284 Shares
Last Edited: 4th January 2013 The content of biblemoneymatters.com is for general information purposes only and does not constitute professional advice. Visitors to biblemoneymatters.com should not act upon the content or information without first seeking appropriate professional advice. In accordance with the latest FTC guidelines, we declare that we have a financial relationship with every company mentioned on this site.

Previous Post: Why Multitasking Is An Essential Skill For College Students
Next Post: Debt Free Story: How Frugality, Hard Work And Determination Can Lead To Debt Freedom.