A few weeks ago I wrote a post that called “How To Save Money On Just About All Your Regular Monthly Bills“, where I went in depth talking about ways that you could save on all of your regular bills, from your utility bills to entertainment costs to insurance premiums.  We gave over 25 ways to save on your regular monthly costs.

While I had already put a lot of the tips I shared in the post into practice, I knew there were some areas where we could definitely improve.

We were still paying far too much for our home phone and internet services, and we also were paying for redundant services that we already had through another provider.  In addition we’ve obtained new homeowner’s and auto insurance, which also saved us a ton of money.

Over the past couple of months we’ve been able to cut back and save in a number of areas.

When all is said and done we’ve been able to save almost  $1600 a year just by making a few changes.  Those changes didn’t mean a significant drop in services enjoyed, just more money in our pockets.

Save Hundreds By Cutting Services 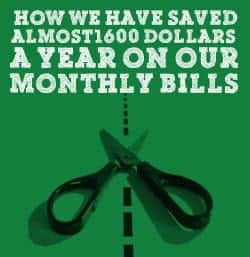 One of the first things that we did when trying to cut costs was to find and cut the low hanging fruit.

For us cutting the low hanging fruit meant looking at the $7.99/month Netflix subscription we still were paying for but barely using.  While we love Netflix, and like receiving movies in the mail, after looking at it logically we realized Netflix wasn’t a cost efficient entertainment option for us.  We were only getting a couple of movies a month and we could save money just by getting them at our local Redbox for $1.

We had also considered doing Netflix streaming at one point, but Amazon Prime now also has a streaming service which is just as good or better – and we’re paying for Amazon Prime already. That service is only $79/year or about $6.58/month, and we get other extras along with that subscription like free 2 day shipping.  So we cut the Netflix and saved about $95.88/year.

Dropping Our Landline For VOIP Service

I’ve been trying to get my wife to drop the home phone for some time, but she’s always insisted that she liked having a landline that she could talk on and didn’t want to use only cell phone service.  Add to that the fact that our home security system needed a landline to function correctly, and we’ve never even considered stopping the landline service.  We recently, however, discovered that there are other options for security service that don’t require a landline, so that meant if we could find a suitable replacement for the home phone we could cancel our $43/month phone bill.

Shortly thereafter I discovered a VOIP home phone service called Ooma that allows you to have a home phone with no costs beyond taxes and 911 service charges.  After buying the initial equipment at $140, we’ll only be paying $4.53/month for our home phone service.   So we’ll be saving money about 4 months after canceling our landline.  I set up our Ooma Telo home phone device a couple of weeks ago now and after an initial hiccup with some dropped phone calls (which apparently was due to our Internet provider not Ooma), it’s been working great for the past couple of weeks.  So canceling our home phone means we could also get rid of that $43/month phone bill and save $321.64 the first year, and $461.64 each additional year (after factoring in equipment and new service costs).

Save Hundreds By Asking For A Discount

Another place that we saved money this year was in the services that we didn’t drop.  Within the past couple of weeks I’ve called both Internet and TV providers and gotten reductions in our monthly bills just by asking.

Getting A Discount On TV Service

First, I called our provider for TV service, Dish Network.  We had a 2 year contract with Dish Network and that initial contract expired this past month.  While I could have cancelled the service and probably saved more by switching to another provider, I didn’t want to deal with the hassle right now as we’re hoping to be moving in the next few months. When we move we’ll switch to a new provider and get a new customer discount.   In the meantime I just called and asked to get a discount of some sort so that we could stay with the service.

I’ve called Dish Network and succeeded in getting a slight rate reduction in the past, and this time it was about the same story. I called and was able to get a $5 drop in my monthly rate for 12 months after saying we were considering canceling service.  So if we do end up staying with them that will mean a savings of $60/year.

Getting A Discount On Internet Service

After we dropped our landline (see above), we kept our DSL internet service after checking around and finding that while service elsewhere might be slightly cheaper, we’d have to either buy or lease a new modem almost negating any savings we might see.  Before our landline cancellation went through I called and confirmed our Internet service would continue uninterrupted, and while I was on the line I asked to see if they could find a way to reduce my rate.  After checking around the rep said that we currently had a special “price for life” guarantee on our account, but that if we dropped that feature we’d end up paying like $4 or $5 less per month for service.

After we ported our phone number to Ooma and our phone was cancelled I called back and asked about getting that rate reduction on our monthly internet service.

This time the rep was even more helpful, and she was able to find a deal for long time customers that meant our rate would go from $46.99/month to $24.99/month for one year, and we’d get the same level of service that we currently have.  I could have increased our speed as well for the same price, but our modem wasn’t compatible and I didn’t want to buy or lease a new one.  I went ahead with the deal and that means we’ll enjoy savings 0f $263.90/year, just by asking!

Save Hundreds By Getting Quotes On New Services

The other big area that we’ve saved money in the past few months was by shopping around and getting quotes on new homeowners and auto insurance.  While I thought that my premiums were a bit high, especially on my homeowners insurance, I didn’t know just how high they were.  In the past I had saved over $1000 on my auto insurance, and I was about to find similar savings on our homeowner’s policy.

We shopped around for new homeowner’s insurance using the quote engine that I have on this site.  After getting quotes from about 5 or 6 companies we weren’t seeing the rates that we wanted. After working with a final insurance broker we found through the quote engine, she was able to find us a savings of almost $844/year when we switched our homeowner’s and auto policies. Not only that but our level of coverage would increase!  To use the quote tracker spreadsheet that we used and to get your own quote check out the full homeowner’s insurance switching article.

This isn’t the first time we’ve saved on insurance.  A few years ago we saved almost $1100 by switching!

After our blitz of cost cutting we’ve been able to save our household $1585.42/year, or $132.12/month.  That’s a nice chunk of change that could be put to better use elsewhere.  What would you use that money for? For us right now we’re putting all savings towards a house down payment.

What did it take to get these savings?  Nothing more than a little bit of time and research, and then a few phone calls.  We dropped some services, asked for discounts on others and got quotes for new service for still others.  The small amount of work that it took was well worth it in the end.

How about you, have you tried cutting your monthly bills recently? Share your successes in the comments!

Share53
Pin451
Tweet42
Share4
550 Shares
Last Edited: 17th August 2018 The content of biblemoneymatters.com is for general information purposes only and does not constitute professional advice. Visitors to biblemoneymatters.com should not act upon the content or information without first seeking appropriate professional advice. In accordance with the latest FTC guidelines, we declare that we have a financial relationship with every company mentioned on this site.

Previous Post: Four Reasons Not To Put Your Insurance On Autopilot
Next Post: Making Your First Money As A Kid: What Was Your First Job?