Over the past year or so we’ve been exploring the possibility of selling our current home and buying or building a new home somewhere close by.  The process of finding a new place to call home is definitely much more difficult than I would have imagined it would be.  It’s been a bit of a roller coaster ride.

There are a lot of reasons why we’ve considered moving on from our current home where we’ve lived for about 6 years.  We want to have a bit more space, have a main floor office so that I can work from home on occasion, a 3 car garage and we also wanted to have more of a yard than we have in our current house.

Our current house is in a neighborhood where the houses are built on smaller lots, and the small lots don’t leave a whole lot of room for a yard. If we want to go out and play outside with our son we almost have to head to a local park or playground because our outdoor space is minimal, and it sits right on top of our alley which has cars going up and down it all day.

This year we started looking a bit more seriously for a new house since our son is getting bigger and we’ll likely be heading outdoors with him more often. So here’s our roller coaster ride, so far.

Finding a new home is usually the easy part, but in our case it hasn’t been as easy as we had hoped.

My wife has specific wants in our new home (since we don’t plan on moving again for a LONG time) and a lot of the existing homes that we were looking at didn’t have all of the things we wanted all in one package.  We looked at a lot of homes, but nothing really seemed to click or felt like home.  The homes either felt too old, too run down, or the layout just didn’t seem to work for us. Having a nice neighborhood was also key, and a lot of them fell short in that area.

Buying A Lot And Building A New Home

My wife’s parents are home builders, and if we do end up building a new home we figure we’ll most likely use them as our builder.  They have a wealth of experience in building custom homes for wealthy clients, and since they’re building for family we know they’d go above and beyond what they even usually do. They also offered to help us out, and build us the home at a reduced cost. In the end going with them is a no brainer.

My wife and I have been looking at lots around our area for quite a while, but none of them really seemed like a good fit.  Usually the lot didn’t feel right because there was something wrong with it. One lot was beautiful, but had a major road running behind it. Another was nice, but was right underneath the power lines – you could hear them humming overhead. Finally we found a lot that seemed like the perfect one. It was in a wooded Cul-de-sac, and gave a good sense of privacy while having a huge backyard and pretty views.  It also has more than enough room to build the home we dreamed of, and was close (but not too close) to major highways.

My in-laws ended up buying 3 different lots to build on in the neighborhood, and one of them is going to be for us and our new home… if we are able to sell our current house.  After they bought the lots, however, there was a problem.

Problems When Building Are To Be Expected 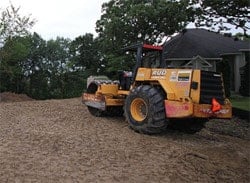 So now that they had bought the lots, my father-in-law was preparing the lots to build on them.  He needed to cut down some of the trees, and bring in tons of back-fill to bring them up to grade.  Because the lots were bank owned, and because they needed some work, they were able to buy them at quite a discount.  Normally lots in the area go for well over $100,000, but these lots they were able to get for less than $80,000.

Now that my father-in-law was preparing to fill in the lots with dirt, he was doing some research on where the utilities and sewer were located. The bank had stated that the lot was fully furnished with these things.  It turns out they were wrong. Apparently the one existing house in the neighborhood had connections, but in order to build any more houses on the lots some major work would need to be done to move the utilities. Doing that would mean ripping out part of the street and would cost in excess of $20,000. That could cut out a big chunk of our savings on the lot, if not all of it.

Since the bank stated in the contract that the utilities were set to go, we felt they were on the hook for the costs to move them.  They didn’t like that and were balking at paying.  My father-in-law was able to work with his contacts, however, and get bids to have the utilities moved – and back-fill moved into the lots for just a few thousand dollars instead of $20,000+.  When they heard he had been able to  get the cost reduced by so much, the bank agreed to pay for them. Crisis averted.

The Pressure Of Selling Your Old House

So now we’re in a situation where we have the perfect lot, and we have a great builder, but we still have an existing house.  We’re now need to sell our house before we move forward.  We wouldn’t be able to build the home until next spring anyway, so what we’ve decided to do with my in-laws is to wait until early spring to list our house on the market. At that time we’ll list the house for sale, and my in-laws will start building the house on spec.

If our home doesn’t sell within a 2-3 month time frame that they’re building the house, they’ll list the new house for sale, and most likely sell it.

All of this to say that we’re going to need to do some serious work in preparing our home for sale, and listing it at a price that is fair on the market, yet gets us what we need to have in order to pay off our mortgage, and hopefully have a little left over.

Unfortunately our neighborhood has also had several foreclosures recently as well, and because of that home values have been hurt, a lot of people are underwater in their homes.  We have seen homes similar to ours selling for just anywhere from $170,000-$210,000.

We currently owe just over $193,000 on the home.  At this point if we could sell the house for enough to cover the mortgage and the costs of selling a home, I think we’d be happy. We have a decent amount of money saved up for a down payment, and if we can cover all the costs of our previous home we should be fine.

Options If The House Doesn’t Sell

So what are we going to do if we can’t sell our current home for what we need? We have a couple main options.

Getting Emotionally Invested In A House

One of the biggest things we’ll be dealing with I think is becoming too emotionally invested in the idea of a new house, and everything that relates to it. For months now we’ve considered moving to this new lot, talked about what we would do when building the new house and just pictured ourselves living there.  If it doesn’t happen, I think there will be sense of loss for what might have been if we had moved there.

Personally I think I’m better able to divorce the emotional and rational perspective when it comes to a house. But for my wife it’s a home, it’s security and it’s a sense of family and place.  If it doesn’t happen it will likely hit her harder.

When it comes down to it, I do hope that everything falls into place like we need it to, and we end up getting the home of our dreams. We’ll pray about it, we’ll work towards making it happen, and seek God’s will for our path.  The next few months should be an interesting ride.  Time to buckle up and hold on!

Are you in the middle of considering building or buying a new home? What things are you doing to prepare yourself?

Share17
Pin3
Tweet29
Share7
56 Shares
Last Edited: 6th December 2012 The content of biblemoneymatters.com is for general information purposes only and does not constitute professional advice. Visitors to biblemoneymatters.com should not act upon the content or information without first seeking appropriate professional advice. In accordance with the latest FTC guidelines, we declare that we have a financial relationship with every company mentioned on this site.

Previous Post: 5 Ways You Can Give Back To Those Who Are In Need This Holiday Season
Next Post: Avoiding The Negatives That Come Along With Money And Wealth By Living Generously