My wife and I have been shopping around lately trying to find a good deal on a lower rate for our home mortgage.  We’re currently sitting at around  6.5% with our 30 year fixed rate mortgage. We bought our house right before the real estate bubble burst, so the market was at its highest.

Our timing wasn’t the greatest, and we now realize that.  What’s done is done, and now since rates are near 30 year lows, we thought it would be a good time to look into lowering our rate.   We know we have good credit and no debt, so those things weren’t issues.  The only thing we’re worried about is the appraisal.  Who knows how bad the market has been hurt in our area in the last 2 years?  Will we still have enough equity to be approved? 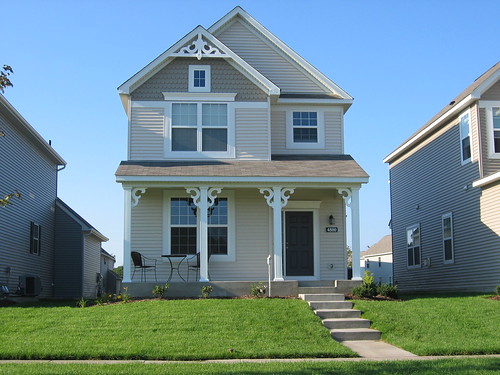 (Update: There are new options in refinancing and loan modification!  Check out my updated post on the “Making Home Affordable” program that has just been passed.)

Is It Worth It To Refinance?

The first thing we did was to figure out what kind of difference lowering our rate would make, both over the life of the loan, and in the short term. We also wanted to make sure that any fees we paid would be paid back in a year or so just through the lower monthly payments.

Here’s a refinance calculator similar to the one we used to figure out how much we’d be saving. Input your own numbers here to figure out if it makes sense for you to refinance.

After entering our numbers we found that just by going from a 6.5% to a 5% rate we could save over $200 a month on our mortgage. Since we want to pay off the mortgage early, that extra $200 could go towards the principle, so not too bad!  We just had to find a 5% rate where the fees were low enough to make it worth our while. If the fees were too high, and the payback period (the length of time it takes to pay back the fees through lower payments) was too long, we wouldn’t be doing it.

We started our search by calling our current mortgage provider, Countrywide Home Loans.  We figured that we might be able to just make the process short and painless, and get Countrywide to do a loan modification and lower our rate without fees.  If not, we figured they might at least give us a decent refinance rate with low closing costs.

Boy were we wrong. When I called their “customer service” number I got someone on the phone that obviously didn’t know what they were talking about. Their computer wasn’t working and they couldn’t pull up the rates for like 15 minutes.   Finally after waiting on hold for like another 15 minutes they told me that they couldn’t do a loan modification (no surprise) and then gave me a rate that was around 5.25%.   Not completely horrible, but the fees and closing costs ended up being close to 7 grand!

Of course they shrugged the fees off and told me how they could painlessly roll that 7,000 dollars right into my loan for me, and I wouldn’t have to pay a thing out of pocket!  Of course they don’t tell you that that 7 grand will quickly turn into almost double the amount in interest charges.  No thank you!

I politely declined Countrywide’s offer and told them I was sure that I could get a better rate somewhere else. They said that if I did get a better offer to come back with the good faith estimate and they would match it.

If they knew they could do better than they had quoted me, why couldn’t they just give me a better deal up front?  That made me a little angry.  Now I was determined to find a better deal so that I could drop these guys like a bad habit.

I decided that it was time to get some quotes from other mortgage companies, brokers and banks. Here are a few of the places I went to get quotes and information.

I wasn’t overly impressed with what I was finding.  The rates were good, at around 5%, but the fees everyone was asking were just too much.

After getting several quotes, but nothing that I wanted to sign on, I turned to twitter.com to voice my frustration to my 1300+ followers.  I mentioned how I was finding tons of good rates, but too many fees.

After sending my tweet, I quickly heard back from several users suggesting I contact a couple of mortgage twitter users that they’ve talked to and been impressed with – for their advice.

I started tweeting with several mortgage professionals that were able to explain the mortgage market to me a bit better. You might find them useful too, so here they are (most helpful folks are bold):

I’m  sure there are a ton of other helpful mortgage twitter users out there, and I invite them to leave a comment with their twitter id below.

One of the twitter users, @mortgagereports was a mortgage broker, and after talking briefly he had his assistant call me to get my information for a rate quote.

Through him I was able to lock on a 5% rate, and pay $1500-3500 less in fees than the other banks and brokers were asking.   Our payment would drop by over $200, and the payback period for the loan after fees were figured in would be just over 1 year.   I was happy with that since we’re planning on being in this house for at least a few more years.

Waiting For The Appraisal

After signing the paperwork and locking in our rate, the only thing we were nervous about was the appraisal on our home. To get the loan without paying private mortgage insurance we knew we would need it to come in at or near a 80/20 loan to value ratio.   After talking with an appraiser that we had used in the past, we realized that home values in our area have dropped significantly more in the past two years than we had banked on.

Since the home values have dropped so significantly we won’t be anywhere near the 80/20 LTV ratio we would need to close on the refinance.  On top of that we are now in a situation where my wife may be facing a layoff at her job soon.   Double whammy!  We could have closed on the loan still, but with the mortgage insurance it would mean we’d only be saving about $75/month, which means it would take over 3 years to pay back the closing costs.

The refinance is off for now.  We’ll have to try again in a while once the market starts rebounding.  Who knows how long that’ll be!

Have you attempted a refinance recently?  If so, tell us about your experience in the comments.  Were you able to get a good rate? Were the fees low?  Did your house appraise at what you needed it to in order to get the loan through?

Share1
Pin
Tweet
Share
1 Shares
Last Edited: 5th April 2012 The content of biblemoneymatters.com is for general information purposes only and does not constitute professional advice. Visitors to biblemoneymatters.com should not act upon the content or information without first seeking appropriate professional advice. In accordance with the latest FTC guidelines, we declare that we have a financial relationship with every company mentioned on this site.

Previous Post: Do You Ever Plan To Fully Retire?
Next Post: Personal Finance Bible Verse Of The Day: Never Satisfied With His Income