There are a lot of pros and cons to paying off your home mortgage early, and today I thought we could examine what some of them are.

Paying Off Your Home Early

If you’ve saved for your retirement and put money away for your children’s college expenses,  you might be considering paying extra on your mortgage, and paying off the home early.

There are a variety of ways you can do that.  One suggestion is to get no more than a 15 year fixed rate mortgage, that is no more than 25% of your income.  If you don’t already have a 15 year fixed mortgage, now may be a good time to refinance your home with the “Making Home Affordable Refinance Program“.   A 15 year mortgage may mean higher payments, but it also means you’ll be paying the loan off earlier, and you’ll be paying less in interest.  Pay it quicker that 15 years, and you’ll save even more because most of the interest is paid at the front end of the loan period.

You can also just keep your current 30 year mortgage and just make extra payments if you’re unable to refinance for whatever reason.

By paying off the mortgage early you’re also going to be giving yourself a huge peace of mind knowing that your house is paid off, and if the worst happens, you’ll be able to get by on a whole lot less. After all, the house is paid for!

Arguments For Paying Off The House

There are a lot of arguments surrounding whether or not you should pay off your house, and whether it really is the best thing to do psychologically and financially.    I know I won’t solve that debate here today, but I thought I would look at some of the points in favor and against this plan, so you can make the decision for yourself.

Points in favor of paying off the mortgage early:

On another site, I read a story of someone who has paid off their mortgage.  It really emphasized why paying off a mortgage can be a good idea.

A friend of mine is in his mid-thirties and paid his mortgage off completely. This allowed his wife to quit work and stay at home to raise their three children. They have no other debts, and he recently took a lower paying job because it brought him more satisfaction at the end of the day. He wasn’t trapped by an enormous mortgage, or saddled with other debt. Being debt free allowed his family to make these decisions to live the life they want to live, not live the life they are force to live to just to repay debt.

Being debt free brings freedom, and sometimes that’s better than a few extra dollars made through investments. 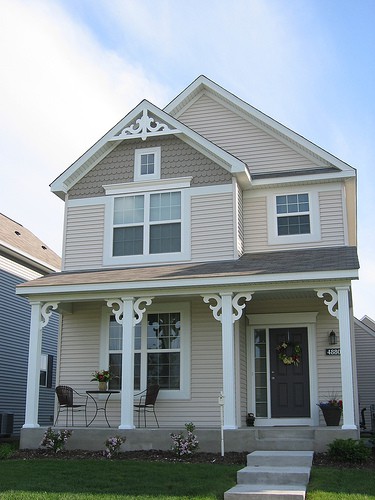 Arguments Against Paying Off The House

The arguments against paying off the house first do have some merit.  It really makes the decision a tougher one.

When looking at all of the arguments in favor and against paying off your house early, both sides of the debate make valid points.  That makes the decision on what to do a tough one.

On the one hand, the psychological and peace of mind benefits of paying off the house early are very apparent and powerful to me.  I can’t even imagine how freeing it would be to pay off our house, and to have all that extra money every month to save, invest and give away to those in need.  Complete debt freedom would be amazing!

On the other hand if you look at the numbers logically,  not paying off the house early really does seem to make more financial sense. With a historical stock market return of almost 12% in the long run, there aren’t many cases in which prepaying the mortgage can make more financial sense.  In fact, if you’re looking at a 15 to 20 year window of home ownership, in the past an investment in the S&P 500  index would have been a better investment 100% of the time!

Still, it comes down to weighing the benefits, the risks and balance sheets on both sides of the equation.   For me, after considering both the financial and emotional/psychological sides of the equations, I’m still coming down on the side of pre-paying the mortgage.  It  just seems to me to be such a powerfully motivating goal to have – a debt free life.  I really relate with the story I linked above about not having a house payment, and the freedom that brought to the family – being able to have one spouse stay at home, and having the power to walk away from  a job that wasn’t ideal.

While I realize that some may do better financially by not paying off the house, to me it is more motivating to be living a life without debt and to have the freedom that goes along with that.  The few extra dollars we might make by investing the extra money instead doesn’t matter as much to me.  The answer may be different for you.

What do you think about paying off the house early?  Do you think it’s a good idea or a bad idea? Which path are you choosing if you’re at that point? Tell us in the comments

Share3
Pin1
Tweet2
Share
6 Shares
Last Edited: 20th May 2013 The content of biblemoneymatters.com is for general information purposes only and does not constitute professional advice. Visitors to biblemoneymatters.com should not act upon the content or information without first seeking appropriate professional advice. In accordance with the latest FTC guidelines, we declare that we have a financial relationship with every company mentioned on this site.

Previous Post: Devotional: Pearl of Great Price
Next Post: How Much Extra Will I See In My Paycheck Because Of The 2009 Economic Stimulus Package?