In the past couple of years my wife and I have been able to dig our way out of debt – and a couple of years ago we paid off our last debt, a student loan for my college education. It was an amazing feeling being able to do that – it was a weight off our shoulders.

Over the past two years since our debt has been paid off we’ve been through quite a few rough patches. My wife has been hospitalized twice with unrelated problems, and is now expecting our first child within the next month or so. Needless to say having my wife be in the hospital 3 times over the past 2-3 years hasn’t been cheap, and has set back our investing and wealth building phases back a bit.

We are now in a phase of our financial lives, however,  where we’ve saved up a sizable 10 month emergency fund, and are ready to embark on the next steps in life.  Building wealth and paying off the mortgage early. So today I thought I would talk about the idea behind making extra payments on your mortage in order to pay it off ahead of schedule. 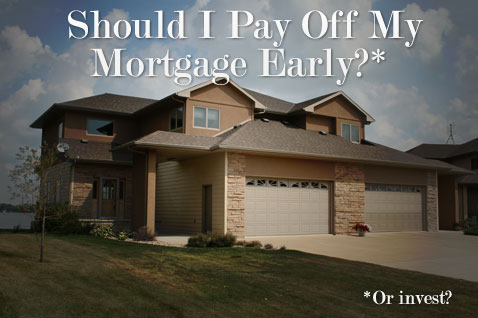 When Would I Want To Pay Off My Mortgage Early?

If all those things are being done, and there’s still money left over, I might consider paying extra on my mortgage.

How much of a mortgage should you have in the first place?  Dave Ramsey suggests getting no more than a 15 year fixed rate mortgage that is no more than 25% of your income.   Having a 15 year mortgage means you’ll have higher payments, but it also means you’ll have it paid off sooner, you’ll pay less in interest, and you’ll be forced to stay disciplined to pay it off in 15 years or less.

At our house we ended up with a 30 year mortgage because when we bought the house we wanted the flexibility of the lower payments, and we knew we had the discipline to be making extra payments as we could.   We have made extra payments when we have extra.  So far this year we’ve paid an extra house payment completely towards principal, and hope to do a couple more at least.

Ok, so we’ve simplified the idea of paying extra towards your mortgage, but there is actually a lively debate as to whether it is a good idea or not.  I want to look at some of pros and cons around paying your mortgage off early.

Reasons Why Paying Off The Mortgage Early Is A Good Idea

There are a lot of people who think that paying off your mortgage early is a great idea, and is an indicator that you’re heading down the right path.  Here are some of the reasons they give for paying extra.

To me the benefit of having a paid off mortgage can’t be overstated.   With no mortgage, and no other debts you’ll be free to pursue things that you enjoy.  You’ll be able to work less doing things you enjoy.  You can take the money you’ve saved in interest and build wealth.  Why not!

Want to hear the story of someone who paid off their mortgage early, and seems pretty happy about it?  Check out this post:  How We Paid Off Our Mortgage in Under Ten Years

There are those that say that while it’s a nice idea to pay your mortgage off early, there are reasons why you shouldn’t.

So for some people it seems that just holding onto their mortgage ends up being the preferable option. For  a story of someone who didn’t pay off  their mortgage early, read this post: Why I Didn’t Pay My Mortgage Off In Full

Why We’ve Decided To Pay Off Our Mortgage Early

When you talk about paying off your mortgage early there are a lot of pros and cons on both sides of the equation.    If I were to simply make a decision based on cold hard numbers, I might have to admit that maintaining a mortgage for 30 years would be the best route.  But since I know that we have a goal of not owing anything to anyone, and we long to have the freedom and peace of mind that comes along with having a paid off mortgage, I can’t rationalize not paying extra on the mortgage – even if it is mathematically the best choice.   And the savings in interest speaks for itself.

So after saving and investing, we’ve made what totals to one full extra payment towards our principal so far this year.  As the years continue we hope to accelerate the rate of payoff to make the day we can say we are truly debt free come that much faster.

When making your own decision you need to weigh the factors listed above, think about your risk tolerance, and make a decision that you feel is best for your family.

Are you considering making extra payments on your mortgage in hopes of paying if off early? Do you have a paid off mortgage? Not paying it off? Tell us your thought process of why (or why not) you want to pay off your mortgage early.

Share65
Pin15
Tweet29
Share5
114 Shares
Last Edited: 4th October 2017 The content of biblemoneymatters.com is for general information purposes only and does not constitute professional advice. Visitors to biblemoneymatters.com should not act upon the content or information without first seeking appropriate professional advice. In accordance with the latest FTC guidelines, we declare that we have a financial relationship with every company mentioned on this site.