I was thinking recently about how so many people have recently had to re-think their retirement plans as their nest eggs have been depleted or vanished altogether due to our economic meltdown.  People who were thinking that they would be quitting the 9-5 are now thinking about working for the forseeable future – they can’t afford not to work.

All of this got me thinking about a question that I’ve often wondered about: Will I ever fully retire to the point I’m not working at all any more?  If I could retire early, would I want to? 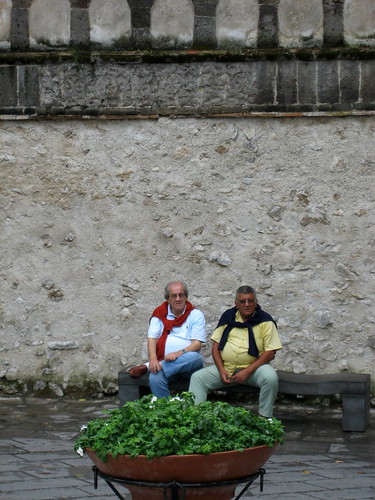 We have a close family friend that is a pastor, and he’s still working at 101 years old.  He doesn’t seem his age, and part of the reason I think is because he is still active and working.  He has always said that he would never retire because working makes him happy, and he wants to remain busy and actively challenging himself.  He still preaches from time to time, is active at his senior living center.  In fact he just finished writing another (one of many) book!  Not bad for someone who is over a century old, and he’s about the happiest person I know.  (One of his books is titled “Something Funny Happened On The Way To Retirement. I Never Arrived“)

Why is he so happy?  I think he’s happy because his work means so much to him, and helps give him meaning. Some other reasons to continue working:

Work gives us structure, challenge and social connection.  All good things that people often don’t think about or even realize.  Things we won’t miss until its gone.  The article goes on to discuss this:

Only when we retire do we discover what we’ve lost, says Christopher Sharpley, Adjunct Professor of Psychology at the University of New England. He says that retirees commonly experience depression after giving up work.

“Immediately after retirement there’s a strong upsurge in wellbeing for the first six or so months, which is commonly known as the ‘honeymoon’ period,” he says. “Then after one or two years, there’s a decrease in wellbeing, which can often turn into quite serious depression.”

A study done by the University of Chicago found some other interesting things:

A hundred men and women of various ages and occupations wore an electronic pager for a week. They were beeped eight times a day at random and asked to fill out a booklet, giving details about what they were doing when they beeped and how they felt. When at work, about 54 per cent reported feeling ‘strong, creative, motivated, active and positive’. But away from work, only 18 per cent reported experiencing these sensations. While working, 16 per cent reported feeling ‘dull, weak and dissatisfied’, whilst outside of work, 52 per cent reported experiencing these sensations. But at work, when asked what they would rather be doing, most said they would rather not be at work but engaged in leisure activities.

Why the paradox? Because when it comes to work, we don’t heed the evidence of our senses; we believe the prevailing cultural stereotype that work is bad, an imposition to be avoided. When we’re at leisure we’re free to choose, so we think we ought to be happier.

So work, while it can be hard, frustrating and even stressful, also has a lot of positive side effects including being a good social outlet, challenging our reasoning and giving us meaning.

Retirement Isn’t For Me

For me, I don’t ever plan to fully retire.  The most I plan on doing is having a transition from working 8-10 hour days to working a little less than that.   I don’t ever want to stop working completely.  If I did, I know I would get depressed, bored and unhappy.

Human beings are happiest when they’re rising to meet a challenge; the reward is the sense of satisfaction and achievement in overcoming it. That’s what work provides. If we don’t have that, we become depressed.

When counselling groups of men, Sharpley’s advice is, don’t retire.

A man will be satisfied with good by the fruit of his words,  And the deeds of a man’s hands will return to him.

Hard work is worth your while, and the deeds of your hand will return to you!  Keep on working!

How about you? Do you ever plan to fully retire, or do you think you’ll keep working as long as you can?  Do you think work makes you happy? (as weird as that sounds)

Share1
Pin
Tweet
Share
1 Shares
Last Edited: 30th May 2012 The content of biblemoneymatters.com is for general information purposes only and does not constitute professional advice. Visitors to biblemoneymatters.com should not act upon the content or information without first seeking appropriate professional advice. In accordance with the latest FTC guidelines, we declare that we have a financial relationship with every company mentioned on this site.

Previous Post: Devotional: Giving as Worship
Next Post: Rates Are Low. Is It Time To Refinance? Our Refinance Story