A short while after I started this blog I wrote a post talking about the best ways to watch all your favorite TV and movies without paying for cable or satellite TV.

At the time I was fed up with my cable TV provider, and I decided to research all the tools and streaming services available that would enable me to cut the cord.  It was time to get rid of the constant pay-TV price increases that seemed to have no end in sight.

While that post still has a lot of good information, in the past year or so we’ve seen a lot of big changes in the streaming TV world, and it has made dumping cable and satellite that much more feasible, without having to worry about losing access to your favorite shows.

So what are some of the changes that we’ve seen in the past year or two?

We’ve seen the rise of over-the-air DVRs that make it easy to record high-definition TV programming for no cost other than the cost of the DVR itself.  We’ve seen several new streaming services pop up, like Sling TV and Philo, that promise to make cutting the cord much more pain-free.  And we’ve seen big cable TV empires like HBO, which traditionally are only available via a cable TV subscription, launch their own a-la-carte online streaming channels.

The TV landscape is changing, and it’s easier than ever to drop your expensive cable subscription. So let’s get started.

Over the past few years, I’ve changed my setup a bit as the technology has evolved.  Currently, this is the setup that I use at our house to get all of the TV programming we need.

So that’s my current setup, although it’s always subject to change as I receive new devices to review, or as new services launch.

Now that you’ve seen what I have and use in my cord-cutting toolbox, why don’t we look at some of the options when it comes to the best streaming services, over-the-air DVRs, streaming devices, and more.

One of the biggest advancements we’ve seen in the past few months is the launch of a few online streaming TV services that offer a cheap alternative to cable TV for those who don’t want to pay an expensive monthly bill. The ones that made the biggest splash include YouTube TV, Hulu, Sling TV, and HBO Max.

If you’re looking for something even more affordable, check out our list of free TV apps and streaming services.

If you’re going to be cutting the cord, you’ll definitely want to take advantage of all the free over-the-air HD programming that is available to us these days.  94 of the top 100 shows are available over the air on broadcast network TV. If you’re going to be watching broadcast TV it will be in your best interest to buy a DVR of some sort so you can record your favorite shows.

In my research, there are several over-the-air DVRs that have caught my attention, and that seem to get the best reviews.

So the Tablo and HDHomeRun units allow you to watch live TV and record your favorite over-the-air shows after you hook an antenna of some sort. All three units will require an external hard drive as well unless you buy one of the versions with a hard drive included.

My favorite antennas to hook up your over-the-air DVRs, or your regular TV, are the ones from Mohu. There are other decent ones available as well.

Another option for watching and recording all of your favorite shows is to view and record them online.  There is software that will allow you to watch and record on-demand shows, as well as live broadcasts, and stream them on your computer or to a connected device like a Chromecast or Apple TV.  Here’s the best one I’ve found:

If you truly want to cut the cord, you’ll probably want to buy a video streaming device of some sort.  There are quite a few of them available out there, but you can find one as cheap as the Google Chromecast for around $30-35 or Fire TV Stick for $39.99.

One of the devices above should work if you want to stream video to your main TV at home.  Of course, if you’ve already got a Playstation 4, Xbox One, or another console, those may work for streaming video as well.

Figuring Out Your Ideal Setup

Getting your cord-cutting system all set up can be a bit confusing, but you don’t have to do it all at once, and you don’t likely need to have every component that I do, or that others do. These days the key is to figure out what shows, movies, and other video content you like to watch and find out where that content is available.  Then figure out which devices that content is usually available on.

For us, since we like watching current TV shows – most of which are on broadcast TV – the best setup for our scenario included having an over-the-air DVR like the Tablo. We have an 11-year-old son and a 3-year-old daughter, and the plethora of children’s content on Netflix also works well for us.

No matter what your ideal setup is, in most cases, you’ll need the following things to take advantage of all possibilities.

Figure out which ones are the best for you, and get it set up according to the manufacturer’s directions. You’ll be watching TV and movies in no time!

Is It Cheaper Than Traditional Cable TV?

After going through all of these details, the question is this: Is it truly cheaper to dump your cable TV bill and get your TV entertainment via other sources? The short answer – it depends.

If you pay for all the streaming services, buy a bunch of devices and pay for a variety of shows on their own, it can get pretty expensive.

If, on the other hand, you pick and choose which services you subscribe to, which devices you buy, and what shows you pay for, you’ll almost surely come out ahead.

So for an upfront cost of about $448.98 for the streaming devices and DVR, and a monthly cost of about $29.92, it is decidedly cheaper than paying for cable TV for us. It would take you about 7 months to recoup the startup costs (if you didn’t already have some of the devices you’d need – or get a free device through a streaming service) and then you’d be saving money every month.

In our situation, after repaying your startup costs in those first 7 months, we’d be about $320 ahead in that first year alone. $769.56 or so in the second year.

What Are You Missing?

There is one caveat to cutting the cord in that there is some content that still may not be available to you (at least legally) if you’re not paying for cable TV.

So what would you do with the hundreds of dollars you could save?  Could you find a use for that money?

Have you cut the cord at your house? Tell us what your setup is, and how you’re saving by cutting the cord?  What technologies, services, and devices have we missed that you think should be mentioned? 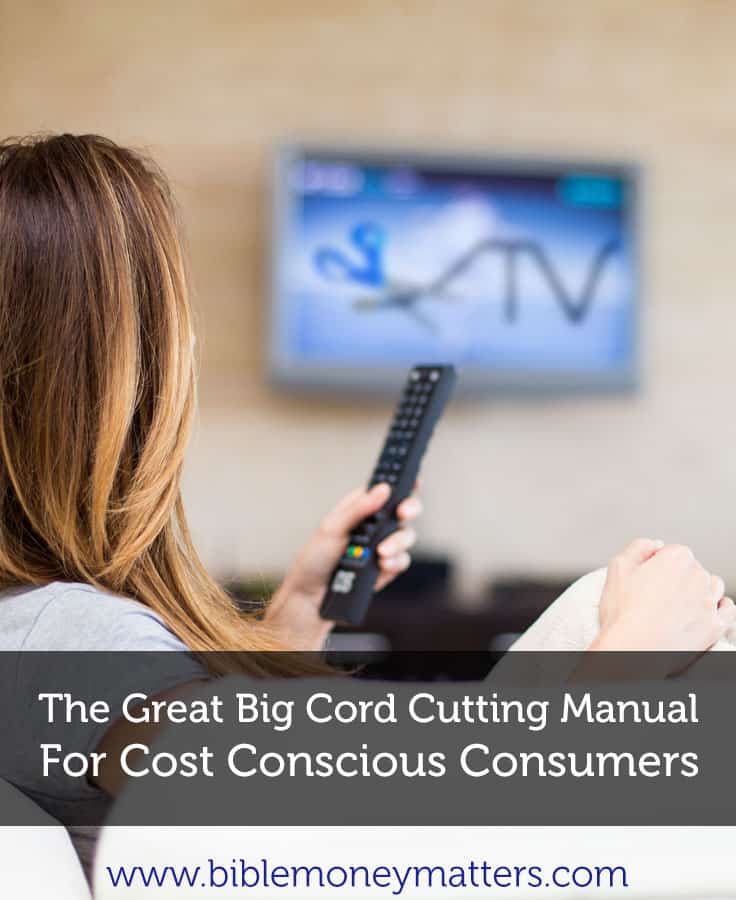 Share378
Pin172
Tweet113
Share43
706 Shares
Last Edited: 9th July 2021 The content of biblemoneymatters.com is for general information purposes only and does not constitute professional advice. Visitors to biblemoneymatters.com should not act upon the content or information without first seeking appropriate professional advice. In accordance with the latest FTC guidelines, we declare that we have a financial relationship with every company mentioned on this site.