In our culture we have a consumer focused mentality, a mindset that says it’s a good idea to buy the things we want, when we want them, regardless of the cost.  After all, you only live once, and you may as well live it up while you still can enjoy it, right?

What gets lost in this type of decision making is an eye towards thinking about our decisions critically, and weighing all of the pros and cons of a decision. Why am I  making this decision? Can I afford it?  What other things am I deciding to forgo in order to make this decision?  In other words, what is the opportunity cost of making the decision that we’re making?

What Is Opportunity Cost?

When thinking about financial decisions that we’re faced with in life, it’s important to weigh the opportunity cost of our decision. In other words, what is “the loss of potential gain from other alternatives when one alternative is chosen?“.  What’s the trade-off I’m making? What benefits from the next best alternative am I deciding to not to partake of because of my decision? 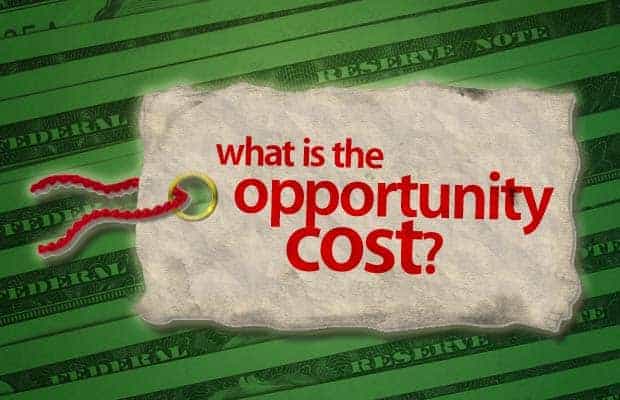 When thinking about the opportunity cost, Paula Pant of Afford Anything likes to think of her decisions in the following terms:

whenever I make a decision, I like to imagine that a Magical Genie is offering me “a gift with a catch.”


She’s saying that often we’re faced with important decisions – but that every decision we make has a catch (the opportunity cost). There is a trade off that we’re making when we make that choice.

So for example, let’s say you’re making a decision about whether to buy a house that is slightly outside of your budget.  The “gift” in her scenario is this beautiful new house with a beautiful yard that will allow you to relax and enjoy your surroundings on a daily basis.

But what’s the catch?  The catch is that you’ll have to work extra hours at work, you’ll have to forgo eating out as often, and you’ll have to find a way to absorb the higher costs of upkeep and property taxes for the more expensive house.  You also won’t be able to save and invest as much because of all the money invested in the house.

So along with the gift, there is always a catch (or a series of catches).


The idea behind calculating the opportunity cost of our decisions is to consider the true costs of our decisions, and not just the immediate benefit that we’re realizing.

What Costs Should We Consider?

For which of you, wanting to build a tower, doesn’t first sit down and calculate the cost to see if he has enough to complete it? Luke 14:28

So what things should we consider when calculating the opportunity cost for a given decision? Here is what you might consider:

It’s important to consider not only our out of pocket and up-front costs when making decisions, but also the lost opportunity costs in all it’s forms.  Sometimes those costs aren’t readily apparent, there are tangible out of pocket costs, and then the intangible costs.

I heard one example of opportunity cost where a gentleman attended the Super Bowl. He bought his ticket for $500, and was elated to go to the game.  He then found out that his seatmate had paid almost $5000 for his ticket via a scalper.  So while his out of pocket cost for attending the Super Bowl was $500, his true opportunity cost was closer to $4500 – the net amount he could have received if he had sold his ticket.

What You Spend Your Money On Now Can Hurt You Later

The way you spend your money matters. There are consequences to all of your spending decisions, so it pays to pay attention, and be careful about how you spend your  money.

If you’re spending money on things like an expensive house outside of your means, a high cost education or on fancy cars and other status items, you’ll likely be less able to invest. You’ll have an opportunity cost of lost returns, and in the end you’ll have a smaller retirement nest egg.

Pay Attention On The Big Decisions

When should you be paying the most attention? In my opinion when you’re making the biggest decisions, things like:

Making the wrong choice when it comes to these big dollar decisions can effectively be something that kills or hinders your financial future, or it can be something that helps to ensure it. Weigh the decision carefully, and make sure you know what the costs and the trade-offs are of your decision.

Opportunity Cost, And How It Could Be Killing Your Future

There are a lot of ways in which not considering the opportunity costs could be killing your financial future.

These are only a couple of examples that I came up with, but the point is that when you have big financial decisions, you need to consider the opportunity cost, otherwise you could end up making an extremely detrimental decision.

How Can You Determine If Something Is Worth The Cost?

Think about the two best alternatives, and then do the following:

When making your decision remember that your decisions aren’t always only financial in scope, and tangible and intangibles may be taken into account.

Is It About More Than Just Money?

Making a decision after you’ve counted the cost is often about more than just money. It may be about relationships, health, convenience or other things.

Money isn’t the most important thing in life, and  while it can be an important part of the decisions we make, it can’t always be the only thing.

When it comes down to it, realizing the opportunity costs of any given decision, and then being deliberate about making your decision, is important.

Be sure you recognize what the “catch” is when you’re deliberating over a decision, and be honest with yourself in what trade-offs you’re willing to make.  Once you do you’ll be well on the way towards making the wise choice.

Do you usually sit down and calculate the opportunity cost of the decisions you’re making? Does it typically influence your final decision?

Share22
Pin23
Tweet27
Share6
78 Shares
Last Edited: 30th March 2015 The content of biblemoneymatters.com is for general information purposes only and does not constitute professional advice. Visitors to biblemoneymatters.com should not act upon the content or information without first seeking appropriate professional advice. In accordance with the latest FTC guidelines, we declare that we have a financial relationship with every company mentioned on this site.