Over the past few years I’ve written a lot on this site about how to cut the cord, and reduce your entertainment costs without forgoing your favorite shows, movies and other programming.

Over the past year or two the entertainment landscape has been changing rapidly with services like Netflix, Hulu and Amazon Instant Video taking center stage with their online streaming video offerings.

With the advent of those services we’ve also seen the rise of a variety of affordable set top boxes lately, especially within the past 2 years. Those boxes allow the end user to view video offerings from a variety of video services, with the hoped for end result of cutting back on the costs of cable TV.

While most of the above mentioned options are probably pretty decent options, only the $35 Chromecast is truly so low cost as to be an impulse buy for most folks.

A month or two ago I got an email from Amazon offering me the opportunity to pre-order their newest device, the Amazon Fire TV Stick.  The cost to me as a member of Amazon Prime was only $19 (Typically it retails for a bit more, but still a really cheap price).  It was so cheap that I decided to jump on board and pre-ordered the device.

Here’s a review of the Amazon Fire TV Stick and how it can help you save.

What Is The Amazon Fire TV Stick? 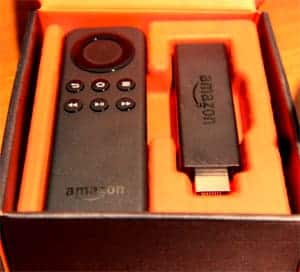 The Amazon Fire TV Stick is an HDMI dongle that you plug into the port on the back of your TV. When it’s plugged in it allows you to access a whole world of TV shows, movies, music, games and more from a variety of different services.  It’s essentially a home entertainment center in a tiny little package.

The Fire TV Stick is probably the most powerful of the latest generation of streaming sticks coming in with more 4 times the storage (8GB), and 2 times the memory (1GB) of the Chromecast. It will play video in up to 1080P HD, and it has a something called ASAP (Advanced Streaming and Prediction) that will learn what shows and movies you like and get them ready to watch – so you shouldn’t have to wait 10 seconds or more for the video to buffer like on some other devices.

The device comes in a nice black box with blaze orange interior that includes the following items:

The device has everything you might need, including that nice HDMI extender cable in case the HDMI ports are a bit tight on the back of your TV, like on mine. The stick is 3.3″ long, 1″ wide and 0.5″ deep, so about the size of a pack of gum.

Here’s the Amazon Fire TV Stick unboxing and review video, along with a quick look at the commercial from Amazon starring Gary Busey. 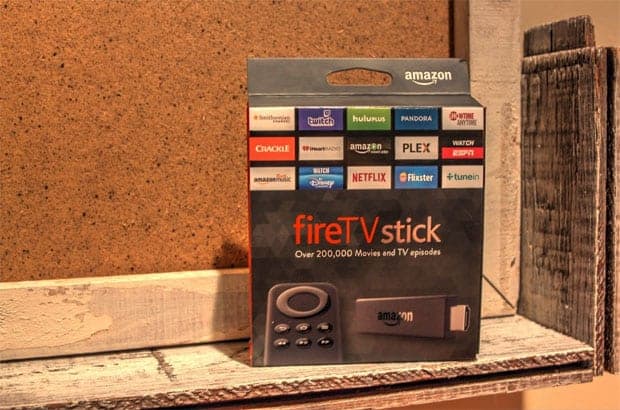 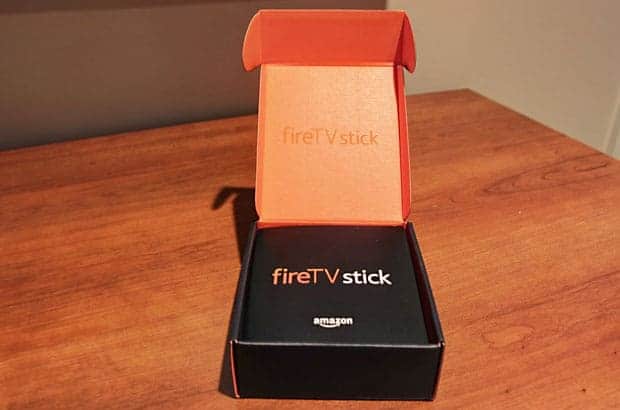 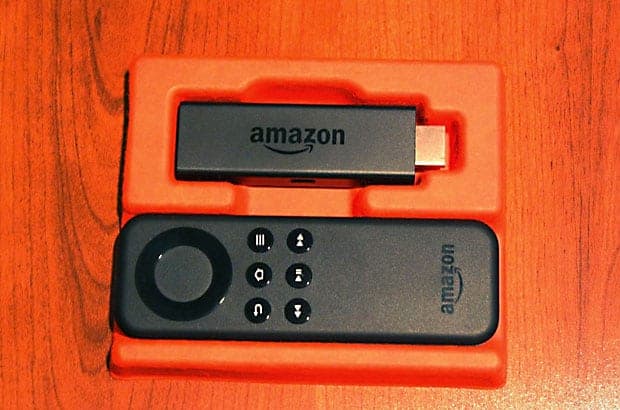 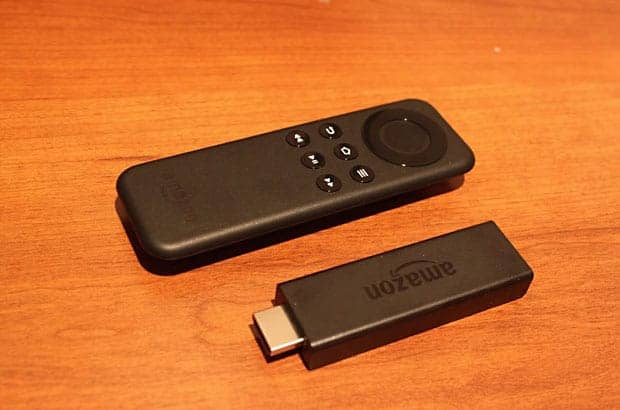 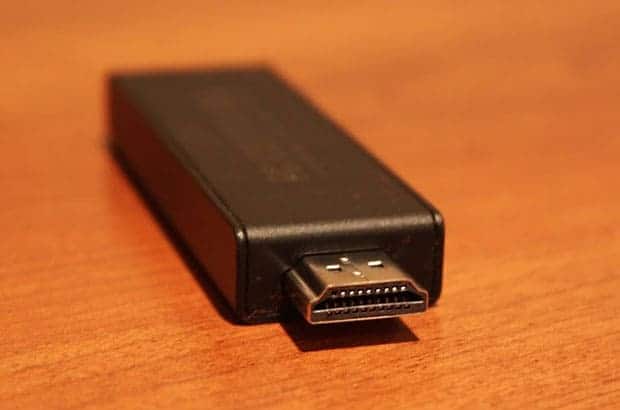 View the whole set of photos over on Google+: Unboxing Of The Fire TV Stick.

Getting the Fire TV Stick up and running was extremely simple.  The device comes pre-registered from Amazon with my account information, so right off the bat I was ahead of the game. Here are the steps I took.

Setting the device up was extremely easy and took about 10-15 minutes from start to finish. It would have been quicker except for the software updates it had to download and install. 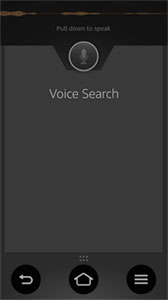 The Amazon Fire TV Stick has a remote app that you can download to your smartphone or tablet.  The app will allow you to navigate your device, similar to using the included remote. Just download the app, connect to the same WiFi network, and then select the device you want to control.

In addition to the basic remote functionality, the app also adds the functionality of allowing you to do voice searches for content.  For example, if you want to watch the movie “Gladiator“, you just hold down the microphone button in the app, and say the name of the movie. It will pull up the movie and options for viewing, purchasing or renting it. If it is available for free viewing via your Amazon Prime account, that will be shown as an option.  Note: it will only pull up content available via Amazon and Vevo, and not third party apps like Netflix, something I hope changes in the future.

So what video and other entertainment services support the Amazon Fire TV Stick right out of the box?

The following companies currently have apps that can be downloaded from Amazon for the Fire TV Stick:

I’ve done a bit of testing with the Fire TV Stick, and for the most part it works as advertised.  I’ve used the Amazon video and music apps to great success, as well as Pandora, Netflix and iHeartRadio. Those are the main services I use on the Chromecast as well, it just has the added benefit of including Amazon services, which the Chromecast does not have.  On the other hand, you don’t have access to the Google Play store via the Amazon Fire TV Stick, so the pros and cons of the two services should be weighed. (Or just buy both the Chromecast and Fire TV Stick like me!)

One thing I enjoyed while listening to Amazon Music was that the device will play the lyrics on the screen so that you can sing along, a nice touch.

The Fire TV Stick does have the ability to play games, unlike other streaming sticks.

You can download games and other apps from the Amazon Appstore.  Most compatible games will allow you to just use the included remote to play games, but there is also an Amazon game controller that is compatible with the Fire TV Stick.  It has an added price tag, however, and it costs more than the Fire TV Stick itself.

I was able to play some simple games on the Fire TV Stick using the included remote like Sonic, Crossy Road and a couple of others. It worked fine, but I’m not sure I’d ever consider the device a gaming machine.  If you want more gaming options, I’d probably end up buying the Amazon Fire TV gaming package, or just buying a game console.

One of the features of my Google Chromecast that I have loved is how you can cast your desktop computer screen to the TV using the Chromecast and the Chrome browser.  In addition you can mirror your device screen whether it’s your tablet, smartphone or other device.

I didn’t think that functionality was going to be available for the Fire TV Stick, and it’s not in the same way. But the Fire TV Stick does have something called Miracast which allows you to mirror your device’s screen.  The only problem I had was that while it would mirror my screen for a short time, but it would then lose the connection and stop mirroring the device.  I don’t know if that is because the connection over WiFi wasn’t strong enough (it should be?), but it wasn’t very usable because of the problems with disconnecting. Hopefully they’ll be able to improve that functionality over time.

The Amazon Fire TV stick is super cheap at $39.99, and when paired with a variety of online streaming video sources it can be a decent replacement for your cable or satellite TV service. Granted, some things like live sports won’t be available, but some options like streaming service Sling TV (which will have ESPN) may help to remedy that in the near future. You can go from paying $50-100+ every month, to paying for only the services you want. If you pay for Amazon Prime, Netflix and Hulu Plus, and use it along with over-the-air TV content, you’ll pay in the neighborhood of $25/month. Not too shabby!

If you have an Amazon Prime membership, or are invested in the Amazon sphere – the Fire TV Stick is definitely a good buy.  If you prefer Google services and Google Play, you might want to check out the Google Chromecast. I own and recommend both.

Have you already bought the Amazon Fire TV Stick (or Amazon Fire TV)? What has been your experience with the device, and do you have any tips or tricks?

Check out and buy the Amazon Fire TV Stick on Amazon.com 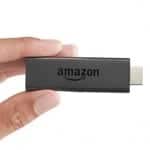 Share50
Pin99
Tweet24
Share10
183 Shares
Last Edited: 6th May 2019 The content of biblemoneymatters.com is for general information purposes only and does not constitute professional advice. Visitors to biblemoneymatters.com should not act upon the content or information without first seeking appropriate professional advice. In accordance with the latest FTC guidelines, we declare that we have a financial relationship with every company mentioned on this site.

Previous Post: Improve Your Financial Situation By Making This One Change
Next Post: How I Save… By Cutting Costs On Things I Already Pay For