Over the past few years we’ve been on a constant search to find ways to cut costs on our regular recurring monthly bills.  Among those bills we’ve tried to cut is the cost for our home phone, along with our mobile phones.

After searching around and testing out a couple of products, we settled on Ooma for our home phones. We get our landline phone like my wife wants, but with more features and significantly less cost. In our case the cost was about $4.50/month in taxes and 911 service charges. Not bad when our original landline cost us in excess of $43/month! Thus far almost 2 years in we’ve saved around $700!

After settling on Ooma we’ve been looking around for suitable alternatives for our mobile phone service.  While we knew we wanted to be with a no contract pre-paid cell service, settling on one took us a while.  We were with Virgin Mobile for the longest time, and for some people I think it may still be a decent option.  For us, however, we found that going with Republic Wireless and their hybrid calling technology was a more affordable option. 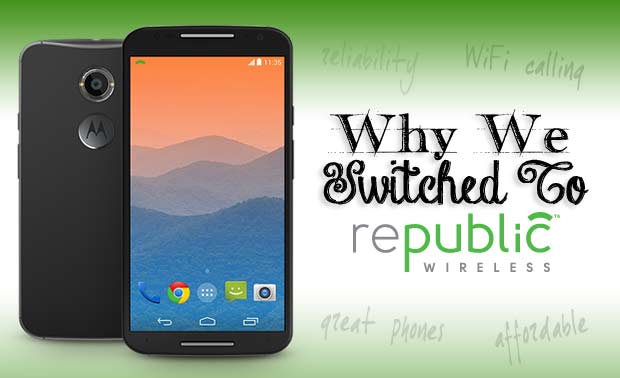 This past month and a half we’ve been giving the cell service with Republic Wireless a try. After testing the service and being impressed, we ended up porting our existing cell phone numbers over to the service a week or so ago. Now we’re signed up for the long term!

So let’s look at why we fell in love with Republic, and why we’re going all in.

Signing Up For Service

I originally heard about Republic Wireless a couple of years ago, but at the time it was still a beta service, with the hiccups that go along with being a new service, with new technology.  I read a bunch of stories about how their WiFi calling technology was still in it’s infancy, and how it was a good idea, but not ready for prime time.

Fast forward to the fall of 2014, and I started hearing about Republic Wireless again after they were a sponsor at FinCon14 in New Orleans. The reviews I read were much more positive this time around, and I touched base with a few bloggers who were using them – like J. Money at BudgetsAreSexy.com – and they had nothing but good things to say.

After deciding Republic might be a decent option for our family I reached out to the folks at Republic, and they were kind enough to provide me with a review phone so that I could write about my impressions of the service.  After testing out the phone for a couple of weeks my wife decided she also wanted a new phone (her phone was 3-4 years old at this point and starting to slow down), so I ended up buying a second phone for her to use.

So we ended up with two phones, both of them the first generation Motorola Moto X, which at the time was their best available phone.  You can check out the entire review on the review page here.

Here’s a quick unboxing video I did at the time:

When signing up for service, the first thing we noticed was that the cost for service was lower than most other services we had checked.  The reason? According to Republic Wireless they’re able to make mobile calling more affordable by making phone calls over WiFi when it’s available.  It’s their so called “Hybrid Calling technology”.  Making phone calls over WiFi is more affordable than making cell calls, so by offloading some of the calling onto WiFi, in theory you’re saving money.

I had reservations at first about their WiFi calling technology, concerned that the call quality wouldn’t be very good, or that there would be problems with WiFi to cell handoff if I began a call on WiFi but left the area while on the call.  In practice I found the call quality to be excellent, and the WiFi to cell call handoffs weren’t even noticeable.  They were seamless.

Here are all of the plans we found with the new Republic Wireless 3.0 plans:

The plan that most people use is the unlimited talk & text + 1GB of LTE data for just $20.

It is an amazing deal, and $5 cheaper than their old Republic Wireless 2.0 1GB data plan!

They do have a bunch of other calling plans, however.  The plans start at a $15/month for a plan with no data, all the way up to a $90/month 10GB plan:

Depending on how much data you use in a typical month, or if you use data at all, the service can be extremely affordable. I  know some people that don’t really use data that go with the $15/month plan, while others like me who use a small amount of data can go with the $20/month plan.

While I tend to use more data than in the past, I always travel with my FreedomPop mobile hotspot anyway (that gives me 1GB of free mobile data every month), so I went with the $20/month plan that gives you some flexibility with cell service and texting, but only 1 GB of data.  If I need extra mobile data I just fire up the mobile hotspot and I’m good to go! 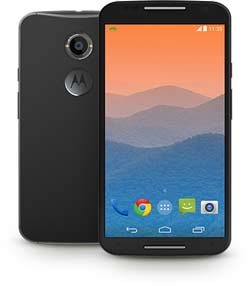 There are currently 8 phones available on the Republic Wireless service, with the newest ones being released just recently.

There’s a phone for every budget and every need with Republic. There’s a starter phone at $99 for people who mainly make phone calls and occasionally want to check email on the go. Then there are the higher end Samsung Galaxy S7 Edge phones for the power user.

All phones are well reviewed phones that I’m sure will work well for most people.

Once we’d been using the service for about a month, my wife and I decided that we were happy with Republic, and decided to go all in and port our existing cell numbers over to Republic from Virgin Mobile. 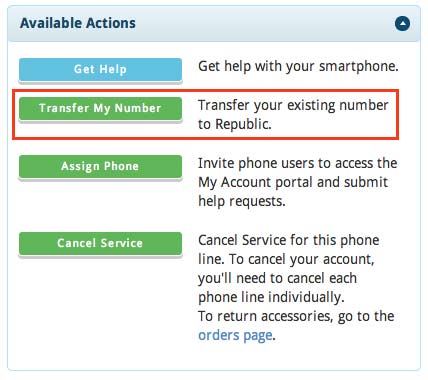 The process of porting our numbers couldn’t have been easier.

We ported both of our phone numbers via the site, and within 24 hours our numbers were transferred. Easy.

There was no extra cost to us for transferring the number, which was also a plus.  I’ve signed up for services before that charge $30-40 or more to transfer an existing number!

Why We’ve Ported Our Cell Numbers To Republic

We’ve been with Republic Wireless now for just over a month. We were extremely satisfied with the service, and we just got done porting our numbers to make the switch final. Here’s why:

1. Service downsides that I had read about before trying them out, seem to have been rectified:

2. We’ll be paying less every month:

Other Helpful Tips And Tricks For Republic Wireless

There are some helpful tips and tricks I’ve learned from the Republic Wireless community forums that have made the service work even better for me.  I thought I’d share a couple of those here in case others have already jumped on with Republic (or if you’re planning on jumping in soon!)

So there you go, a couple of ways you can use apps to save even more on your Republic costs!

Make The Switch Too!

After some initial hesitation we jumped in with Republic Wireless and haven’t looked back. We’ve been extremely happy with the service, the call quality and the extremely affordable cost – we’ll end up saving over $120 the first year! I highly recommend others check Republic out as well!

Find Your Next Smartphone With Republic Wireless Here

Interested in learning some more? Here is some of the other recent content we’ve written about Republic, and saving on your mobile costs.

Share26
Pin3
Tweet39
Share9
77 Shares
Last Edited: 13th December 2018 The content of biblemoneymatters.com is for general information purposes only and does not constitute professional advice. Visitors to biblemoneymatters.com should not act upon the content or information without first seeking appropriate professional advice. In accordance with the latest FTC guidelines, we declare that we have a financial relationship with every company mentioned on this site.

Previous Post: Faking A Predictable Paycheck When You Have Fluctuating Income
Next Post: 10 Tips To Save Money On Your Christmas Shopping And Avoid Going Into Holiday Debt