Whenever I hear about people spending $70, $80 or even $100+ on their cell phone bill every month, I have to admit that I’m usually a little shocked.

I can’t imagine a scenario where I would ever pay that much, especially given that there are so many options out there to get cheaper cell service through a myriad of providers.

I will admit that at one time I gave in and paid for a premium phone and a premium monthly phone bill. At the time, about 8-9 years ago, that meant spending more than $40/month for our cell phones. While that may not sound like much now, to us back then it was a decent chunk of change.

One month after paying  our bill, I decided that I was tired of paying for expensive service when we hardly even used our cell phones.   I decided to look into cheaper options for cell service.

Quick Navigation
Pre-Paid Cell Service Is Often Cheaper
List Of Cheap Prepaid Cell Phone Options
How Much Can You Save With No-Contract Phones?
Cons of Pre-Paid Plans
No Contract Pre-Paid Plans Will Save You Money

Far too often people who don't use their phones very much end up paying for a premium voice and data plan with all the bells and whistles, despite not needing them. These bills can often easily exceed $100/month. 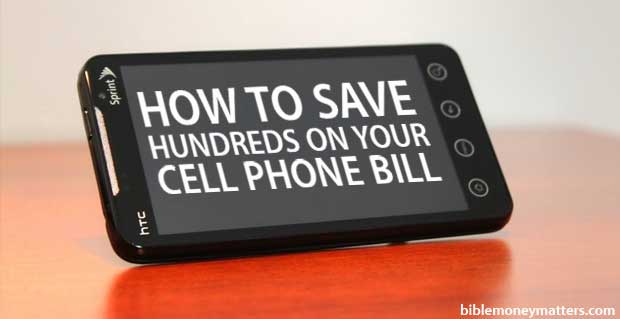 There is a cheaper way, however.  It works especially well for people who don't use as many voice minutes or use as much data.

For example, I only use my phone to call my wife and a few other friends and family members, and usually only use a few minutes every month. I also for the longest time didn't have a smartphone.

For me spending money on an expensive plan was a waste. I found that there were pre-paid phone options out there that fit my needs, and would mean that I would consistently spend around $10/month or even less.

So what pre-paid phone plans are out there?

There are a variety of pre-paid, and even free, phone services out there that you can use. The frugality and savings you'll see will vary from provider to provider.  Here's a list of ones that I've found that have some decent and extremely affordable plans. (I personally use and love Tello - so listed them at the top, but have had great experiences with Republic Wireless, Ting, Twigby and Unreal Mobile as well).

Pricing on the plans with the various companies tends to fluctuate a bit, so i won’t list that here. But what I can tell you is that for my family’s plan we get 2 no-frills pre-paid phones with phone service, texting and mobile data for anywhere from $10-$20/month. If we wanted to we could upgrade and get more data under one of their other plans starting at around $20-30/month. Still a pretty decent deal.

How Much Can You Save With No-Contract Phones?

So the question is, just how much can you save by using a no-contract and/or pre-paid phone?  Hundreds of dollars a year!

That’s somewhere around $96/month for a cell phone bill.  Let’s say that instead of getting one of those high cost plans with voice/text/data, you got a cheaper no-contract version from Tello Mobile. You could expect to pay around $10/month with Tello for 100 minutes of talk/text and 1GB of mobile data.  That’s a savings of $86/month or $1032/year!  Even if you got 4GB of data and unlimited talk/text, the most you’d pay is $29/month – and you’d still save over $804/year.

I’m sure you could find a use for that extra money, right?

At our house we ended up switching to pre-paid service and saving around $500/year by making the switch. Not bad!

There are a few downsides to pre-paid plans.

When you're researching plans, just make sure to know what you're looking for, what kind of a user you are and sign up for a plan that fits your needs.

No Contract Pre-Paid Plans Will Save You Money

For me moving to a pre-paid no contract plan was a no brainer when I realized how many hundreds of dollars we'd save every year.

We've been with Tello for a short while now, and we love it!  The service (on the Sprint wireless network) is great in our area, and we've never had any problems with their customer service.

We now get 2 phones for less than it used to cost us for 1 phone. If we want to at some point we can upgrade to higher plans at a fraction of the monthly cost.  It's a win-win!

While a pre-paid or no contract mobile phone service may not be for everyone (especially for heavy users), there are ways to save, even with a contract phone.

Pay only for what service you use, buy a lesser phone, or get your employer to pay.

Are you using a pre-paid or no contract cell phone service? What has your experience been? Tell us about it in the comments!

Share39
Pin74
Tweet53
Share6
172 Shares
Last Edited: 10th August 2020 The content of biblemoneymatters.com is for general information purposes only and does not constitute professional advice. Visitors to biblemoneymatters.com should not act upon the content or information without first seeking appropriate professional advice. In accordance with the latest FTC guidelines, we declare that we have a financial relationship with every company mentioned on this site.

Previous Post: Black Friday Madness: How I Almost Got Trampled At Walmart’s Black Friday Sale
Next Post: 5 Ways To Celebrate The Birth Of Jesus