At the last moment on Thanksgiving eve I decided that it would be a good idea to head over to my local Walmart store for their Black Friday sale. While a lot of the high impact Black Friday deals weren’t going live until midnight, there were some deals that were available at 10pm, and one of them was a video game that I had been thinking about getting. Instead of being on sale for $50 as it normally was it would be on sale for $15.

I figured that things would be pretty busy at the store, but given that a lot of the bigger deals didn’t go live for a couple more hours, I didn’t think it would be that bad.  Boy was I wrong.

Lines Of Cars, Streams Of People And No Parking

Before I even got to the store I knew I was in for a spectacle.  There was a line of cars coming off of the main highway, waiting to pull into the shopping center that held the Walmart, Sam’s Club, Best Buy and other stores.    It was pure insanity.  I had come in off of a back road and as such was able to pull directly into a parking lot.  But there were no spots available.  I had to circle around with other cars until someone else pulled out of their spot.

At that point I probably should have just gone home because I knew things were going to be crazy, but to be completely honest I had a morbid curiosity about what it would actually be like when I got inside the store.

I ended up having to walk a couple of blocks just to get to Walmart.  There were constant streams of people walking to the store like me, it was almost like a strange pilgrimage as we all made our way towards the doors.

I Didn’t Know Walmart Could Fit That Many People

When I finally got up to the door and walked through I saw a scene like I never could have imagined.  They had walkways roped off so you could actually walk in, but then it was wall to wall people as far as the eye could see.  I tried to make my way towards the area where I knew the video games I wanted were, but there was no way that was going to happen. I just had to go with the flow of people and try to circle back around.

My wife had given me a couple of things to find at the sale as well, but I quickly realized that even though I had gotten there at 10:05pm, they were already gone.

I kept walking through the store and every so often there would be a plastic wrapped pallet with a long line of people waiting next to it – waiting for their $100 TV or $40 Blu-Ray player.  Each pallet had a Walmart employee standing next to it,  guarding it until the clock struck midnight.  It was nearly impossible to make your way through the crowd.

In the end I took a few more quick videos, saw some good friends waiting in line (they actually bought a couple of the things I had been there to get and missed out on!), and escaped out the exit without buying anything.

Has The Consumerism And Greed Taken Over?

While I was walking through the store it occurred to me what a crazy scene this was. While most people were pretty nice to each other, people were pushing and jockeying for position around the most popular items.  By all accounts people across the country weren’t all as well behaved.  On one site today I saw a list of Black Friday stories that made me cringe: 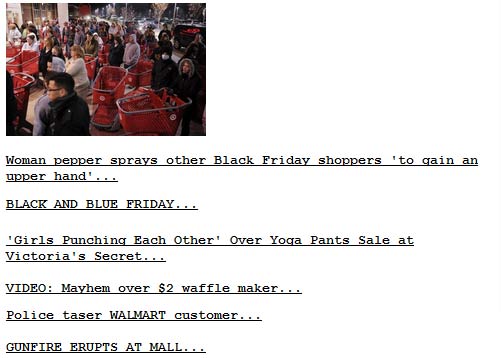 Among the stories I saw were stories of shoppers macing each other, ladies punching each other to get articles of clothing, mayhem over cheap waffle makers, and gunfire erupting at one mall.

The question that comes to my mind is, has consumerism and greed overtaken so many of these people to the point where they’ve become violent and out of control?

In my opinion they would do well to heed the words of the Bible when it says:

Proverbs 28:25  A greedy man stirs up dissension, but he who trusts in the LORD will prosper

The mindless greed that is on display is a little scary. We would do well to seek contentment in Christ, and to follow the example of Paul when he says,

1 Timothy 6:6-12 But godliness with contentment is great gain. For we brought nothing into the world, and we can take nothing out of it. But if we have food and clothing, we will be content with that

Are a great deal on a TV or an article of clothing enough to get us to lose our ethics and morality?

Share4
Pin
Tweet21
Share2
27 Shares
Last Edited: 28th November 2011 The content of biblemoneymatters.com is for general information purposes only and does not constitute professional advice. Visitors to biblemoneymatters.com should not act upon the content or information without first seeking appropriate professional advice. In accordance with the latest FTC guidelines, we declare that we have a financial relationship with every company mentioned on this site.

Previous Post: Doing Your Own Repairs Can Save You Hundreds Of Dollars. Discover Your Inner DIY Handyman
Next Post: How To Save Hundreds On Your Cell Phone Bill By Using A No Contract Or Pre-Paid Phone Service