Over the years one of the big budget busters I’ve tried to tame was our mobile phone bill.

Back in the day we had a calling plan with one of the major carriers, and we were paying close to $50/month for unlimited calling and texting for our phones (Mobile data was still not really a thing).  We knew if we could find a lower cost phone service, we could save a ton of money on our monthly mobile phone bill.

These days people are still paying tons of money for their cell service.  JD Power reported that “the average annual wireless phone bill is now $1,152, up 52% from 2006″.  That’s almost $100/month for a cell phone bill!

The thing is, you don’t have to pay a lot of money for even unlimited cell service these days. With the rise of MVNOs (Mobile Virtual Network Operators), a whole host of small providers are popping up that provide good service, using the same mobile phone networks as the big dogs.

At our house we’ve gone from being users of traditional big cell networks where we were paying $50+ month per phone, to using several low cost mobile phone providers that start around $15/month.

This past month a new mobile phone service launched, brought to us by the folks who created no-frills VOIP cell service FreedomPop a few years back. This time, they wanted to have the service be a more high end, full-featured MVNO. A premium mobile provider, but without the premium price. That service is Unreal Mobile.

Having worked with their company in the past, they asked me to take a look at their service. I agreed to write up a quick review if they’d send me a device and free service for a couple of months.

They sent me a beautiful refurbished Apple iPhone to make that possible.  Here’s my review of Unreal Mobile.

When they launched Unreal Mobile made the claim to have the “cheapest phone plans with unlimited everything. Unlimited talk, text, and data“, and on the face of it they are definitely in that conversation.

Unreal Mobile was acquired by Red Pocket Mobile in 2019, and while they now have a new owner, their plans are still low cost.

Unreal Mobile’s plans start at as low as $15/month, with unlimited talk, text and 2G data. With the $15 plan, you also get 3GB of 4G LTE data.  Not a lot of other providers go that low.

Tello charges $14 and $19 per month for unlimited service and 2GB and 4GB of high-speed data.

In my brief scouring of mobile plans, Unreal is definitely the among cheapest full-featured mobile providers I can find. On top of their low cost, they also allow you to choose the term of your choice, and you can cancel at any time. So it’s worth giving it a try, especially if you already have an available device that you can bring to the service.

Unreal Mobile sent out one of their phones and SIM cards so that I could test out the service. I could see on their site that they mainly offer Apple iPhone devices.

I received the phone and SIM card two days later.  Here’s a quick look at the phone.

The iPhone that I received from the Unreal Mobile folks has the following specs:

The phone is a couple of models back, so it’s not the latest and greatest, but it still works with the service fine.

When I opened the phone and plugged it in the phone booted right up and took me to the home screen.  Since this was a review phone I didn’t have to do any of the normal setup, that was all done for me by the Unreal Mobile team.

The only thing I didn’t like when first turning on the phone was that it had a myriad of updates that needed to be performed.  I think I counted 8 separate operating and system updates that took place that first day.  At least I know the phone gets regular updates and support, right?

Unreal Mobile has a limited amount of phones you can buy with the service, currently mainly iPhones.

Some of the phones available for purchase on Unreal Mobile Shop currently include:

The phones in the shop will vary by day and availability, so check it often to find the one you want.

Unreal Mobile also has a bring your own device (BYOD) program that means you can bring just about any unlocked GSM or AT&T certified phone to the service. To see if yours will work go to this link and then click on the link at the top to buy a SIM to see if your phone is compatible.

Mobile cell phone plans have been going up in price for a long time, with costs coming close to $100 per month for an individual line of service. According to Cowen and Co.:

The average customer of one of the Big Four cellular providers (AT&T, Sprint, T-Mobile, and Verizon Wireless) spends more than $90 per month for individual service—and the figure is $111 for iPhone owners.

Traditional plans can get extremely expensive, so to see a provider that has plans that are actually affordable is refreshing.  Why pay close to $100  when you have low cost plans like this:

The prices above are the 1-month introductory price. After your first month you can renew for 12 months at the same price, or you can choose a 3 month plan at a slightly higher rate. If you stay with the monthly rate, you’ll pay the rate mentioned above after the first month. The longer your committment, the lower your price.

I am on the $15/month plan that gives you unlimited talk, texts, 2G data, as well as 2GB of 4G data.  Since I don’t do a lot of calling and texting, I’m unlikely to need unlimited minutes and text messages, but I use a decent amount of mobile data streaming Pandora and watching videos over my lunch break. This plan should cover me. Also, any data you don’t use in a given month rolls over to the following month.

Premium Services to add on:

Your Unreal Mobile account comes with some other features and functionality as well. Here are a few:

Testing Out The Unreal Mobile Service

I’ve been using the Unreal Mobile phone for a while now.  Here’s a quick look at how the service has performed for me.

I don’t do a ton of calling, but so far the call quality has been great.

I’ve had no problems with calls breaking up, audio sounding delayed or garbled or anything else. I believe I have good AT&T coverage in my area, so for me the call quality has been good.

Text messaging seems to work just fine as well. I’ve done a bunch of texts back and forth with people I know (new phone, who dis?), and have sent pictures, emojis and more with no problem.  I don’t see any issues here either.

I’ve been using the data between home and work to stream music in the car, to do Google Maps, and to let my son play a few online games in the car.  So far the coverage has been great, and streaming works well. I have no complaints. The fact that even after my 3GB of data I’ll still have enough 2G data to do some minimal emails/texts/etc should be more than enough.

Unreal Mobile has burst onto the scene with one of the most affordable mobile phone plans on the market.

For only $15/month and a month to month commitment you can get unlimited calling, text, and 2GB of 4G data.  Need more data? Just pay a bit more.

Unreal Mobile is simple, affordable and works great, and I definitely recommend giving them a try. 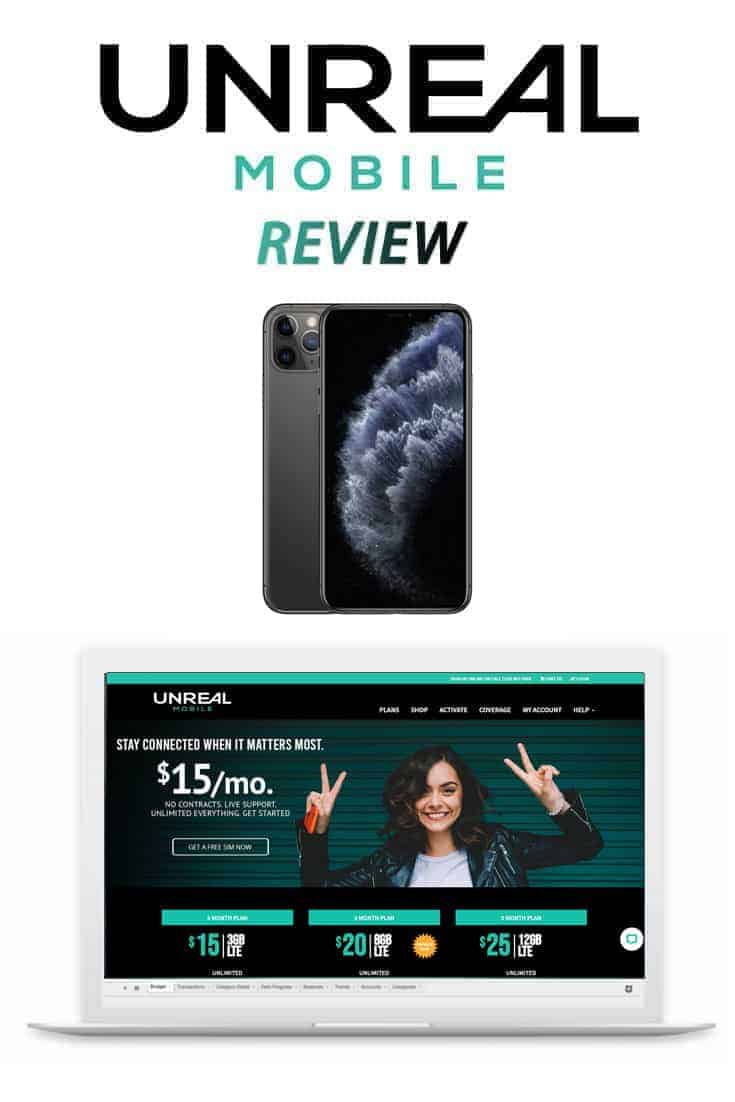 Share64
Pin8
Tweet
Share
72 Shares
Last Edited: 14th December 2020 The content of biblemoneymatters.com is for general information purposes only and does not constitute professional advice. Visitors to biblemoneymatters.com should not act upon the content or information without first seeking appropriate professional advice. In accordance with the latest FTC guidelines, we declare that we have a financial relationship with every company mentioned on this site.