My family is all about finding ways to save money on our regular monthly expenses, and before we switched to a lower cost provider a few years ago, one of our larger monthly costs was for our cell phone bill.

A recent survey by Cowen and Company found that if you’re with one of the big 4 traditional cell companies, you’re likely paying in excess of $90/month or more for service!

The average customer of one of the Big Four cellular providers (AT&T, Sprint, T-Mobile, and Verizon Wireless) spends more than $90 per month for individual service—and the figure is $111 for iPhone owners.

While the costs many people are paying for service is horrendous, these days there are alternatives.  The above survey doesn’t include pre-paid cell or other low cost providers that have popped up over the last few years. If you’re with one of those services, your costs are likely to be much lower.

We’ve been on the no-contract cell phone bandwagon for years now, and for the last year and a half or so we’ve been with Republic Wireless.  I received a Moto X (2013) 1st Generation smartphone from the folks at Republic Wireless in order to do a review of the service. After trying it out we loved it so much that we got a second Moto X (2013) for my wife.

When my Moto X started having issues recently (probably after being dropped by my son one too many times), I decided to jump in and buy the latest and greatest flagship phone from Republic Wireless, the new and improved 2nd Generation Moto X (2014). This post will give you an in depth look at the phone. So let’s get started.

Republic Wireless  has been around since 2010, and they typically receive glowing reviews from people who use their service (like me!). People love the fact that their cell service can be affordable – and that they can pay based on what they use when it comes to mobile data.

So how is Republic able to keep their service so affordable? By taking advantage of prevalent Wi-Fi connections that are everywhere these days, and leveraging those connections through their use of a hybrid Wi-Fi/cell calling technology.

Their Hybrid Calling technology allows them to route voice calls over WiFi networks, and if one isn’t available, then calls will go over the Sprint cell network (or Verizon’s network if Sprint is not available). Republic has perfected the technology to allow for seamless Wi-Fi to cell handovers – allowing you to start a call on Wi-Fi and move to a cell connection if you’re no longer in range of Wi-Fi.

All this to say that Republic has created a new phenomenon in hybrid cell/Wi-Fi calling – to the degree that the bigger providers have taken notice. Many providers have recently started allowing for Wi-Fi calling, although none have completely perfected the seamless Wi-Fi/Cell handovers like Republic has. For many they only have the option of one or the other (Wi-Fi or Cell) with no handoffs mid-call.

Google recently launched a mobile phone service called Project Fi that is a near clone of Republic’s service, although for lower users of data it’s still likely to be more expensive.

I wrote a full review of the Republic Wireless service here if you’d like to check it out, but let’s just say that I love the service – and am excited to continue using the service with my new phone – the Moto X 2nd Generation.

The phone that we just received via FedEx is the $249 Motorola Moto X 2nd Generation, also called just “Moto X (2014)”. It’s an extremely well reviewed phone that has been one of the hottest Android phones since it was released in late 2014. Up until a few months ago it cost $399, so it’s a big bargain now at $249!

The Moto X 1st Generation, or “Moto X (2013)” was well received as well – receiving several “phone of the year” awards. The Moto X (2014) is by many accounts a much improved phone.

Here’s a look at the phone as I unboxed it this week:

So what comes in the box?

After ordering your Moto X via the Republic Wireless site your phone will arrive in a decent sized green package. Inside the flaps you’ll find a small white box with a nice “M” logo on the top, and “Moto X” at the bottom.

So what’s in the package?

Here are a few photos I took of the phone during the unboxing (find the whole set in higher resolution here): 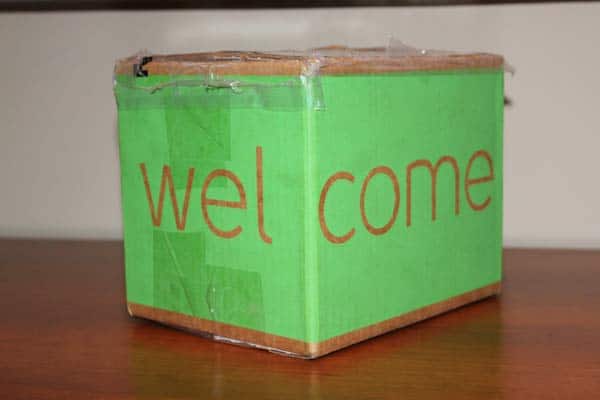 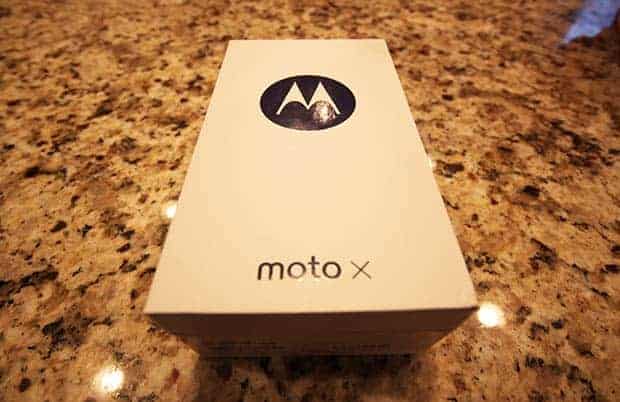 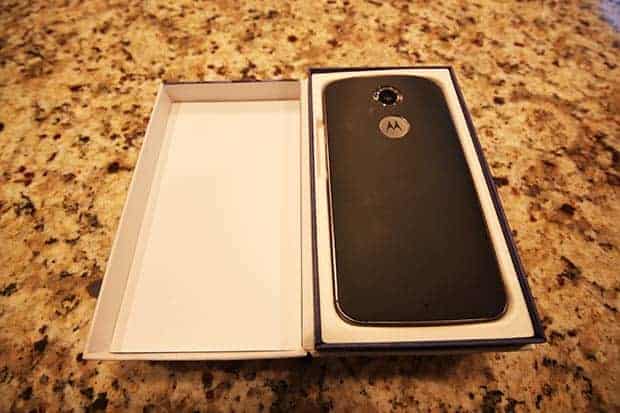 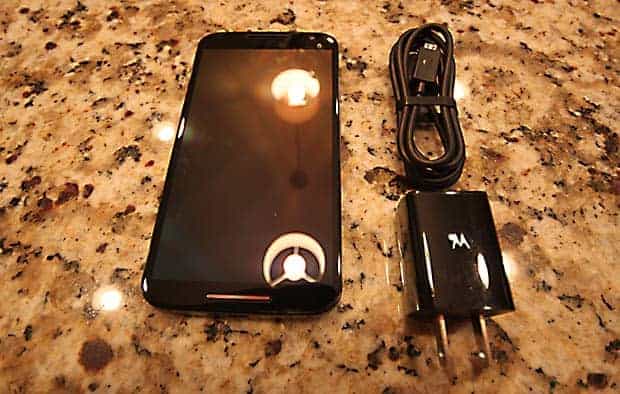 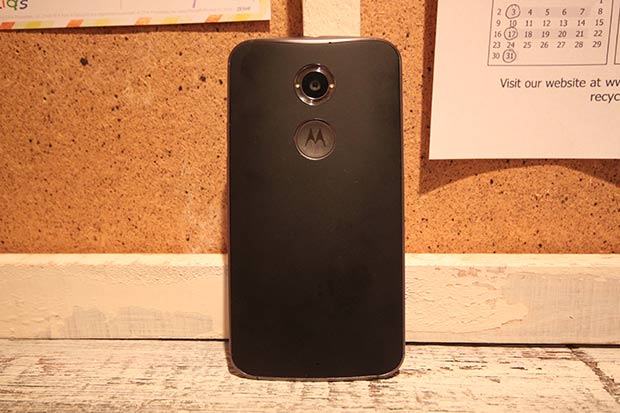 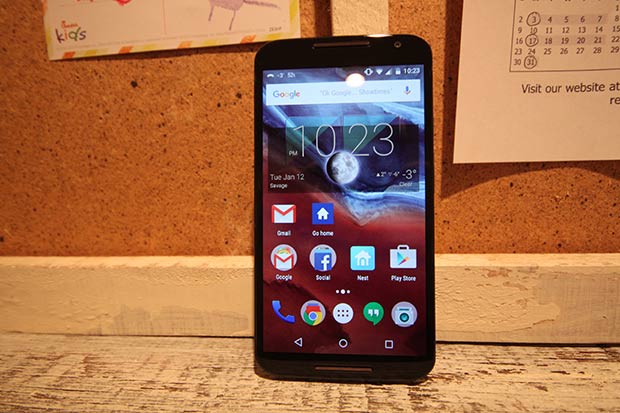 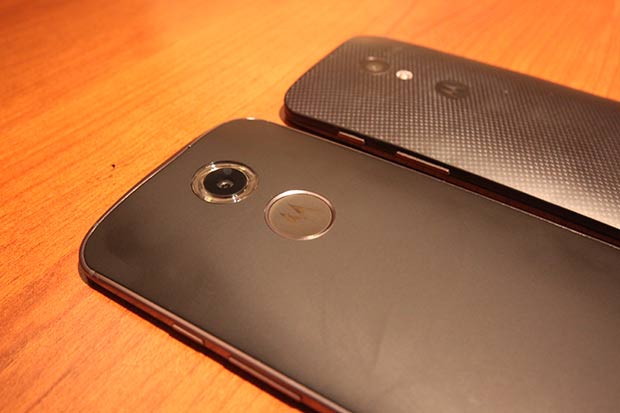 The Moto X 2nd Gen is a beautiful phone.  It has an amazing full HD screen, a nice matte rubberized finish on the rear, and the rounded back fits nicely in your hand. Another nice touch is that the 2nd gen phone is wrapped in a metal band, that not only looks nice, but also helps to improve reception for the phone. The phone just feels like a quality, high end phone.

The rear facing camera has a great 13MP camera, that includes a ring flash with dual LEDs around the camera lens.  That means you’ll get some better illumination on your photos than on the previous generation.  You can also now capture Ultra HD and slow motion video, which should be fun to use.

Here are a few Moto X 2nd Gen stats from the Republic Wireless site for the techies: 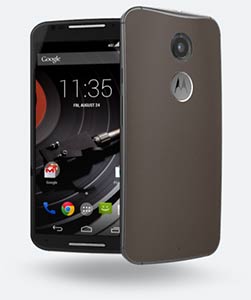 The first thing I noticed in my tests of this phone was that it had better performance than any other phone I’ve ever owned. Apps open super fast and there was never any lag in anything I ran.  Even video intensive games and apps seem to run buttery smooth.

Here are a few of the upgrades in the 2nd gen model:

Here are a couple of photos of the phones to compare and contrast: 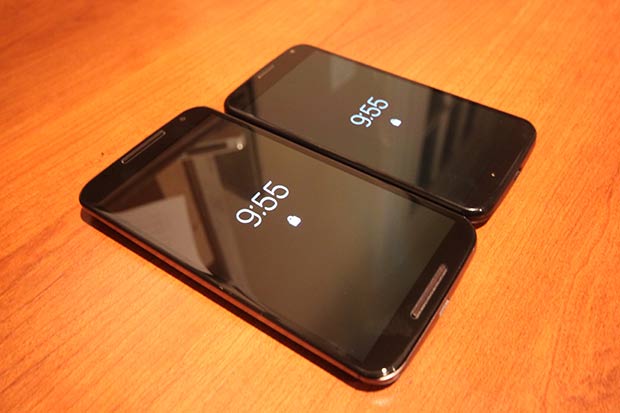 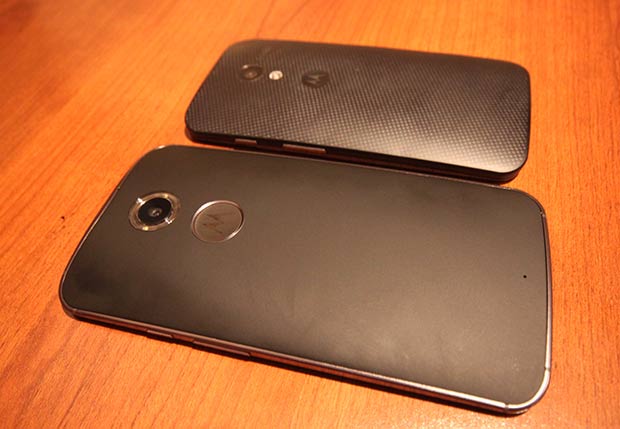 What phone plans are available for the Moto X on Republic Wireless?

The cheapest plan when you signup is the base $10/month unlimited talk and text plan, which means you can make all the phone calls and send all the texts you want. You just won’t have any mobile data to check your email or stream your favorite Pandora station.

Here are the plans:

Receive a Refund Of Your Unused Data

The great thing about the Republic Wireless service plans is that not only do you get a calling plan at an affordable price, but you can also receive a refund for any extra mobile data that you don’t use.

For example, my wife and I are both low users of data since we don’t do a lot of streaming of video or audio, and the 0.5GB $17.50 plan is more than enough for each of us.  Neither one of us ends up using all of our data every month though – so instead of paying $35/month plus tax for both phones, we’re actually paying closer to $30 after receiving our credits for unused data.

Not many other providers will give you a refund for unused data!

The service plans with Republic are flexible so if one month you need more data while you’re traveling, you can add data to your plan, no problem.  The next month if you need less data again, you can do that.

The Moto X 2nd generation has some cool features that are exclusive to Motorola phones.

I’ve been using the Moto X 2nd Gen as my main phone for the past few days. I came in a bit biased in that I already owned the first generation Moto X and loved it – and only upgraded to the second generation because my first phone met with an unfortunate accident.  Now that I’ve been using the 2nd gen for a few days I can honestly say it is better in just about every way.

As a happy owner of the Moto X first generation device I was bound to be happy with the new Moto X.  The bigger screen, better processor, improved GPU, and higher end finish did not disappoint.  The device is a high end smartphone, and can do just about anything you ask of it.

The phone service from Republic Wireless is also top notch. Call quality is very good, and the new data refund plans make it even more affordable, especially if you’re a low user of data like myself.

If you’re looking for an amazing phone, with an amazing service, I’d highly recommend checking out the Moto X 2nd gen from Republic Wireless.

Find out more about Republic Wireless, and the Moto X 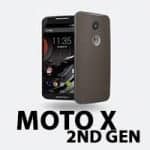 Share17
Pin5
Tweet
Share1
23 Shares
Last Edited: 13th December 2018 The content of biblemoneymatters.com is for general information purposes only and does not constitute professional advice. Visitors to biblemoneymatters.com should not act upon the content or information without first seeking appropriate professional advice. In accordance with the latest FTC guidelines, we declare that we have a financial relationship with every company mentioned on this site.

Previous Post: 3 Ways To Ensure A Fast Tax Refund
Next Post: Fighting The Hunger To Have Anything You Want