Just over a year ago I first discovered and started using the free mobile internet from a service called FreedomPop. That’s right – FREE mobile internet.

So how does their service work and what’s the catch? You buy a mobile hotspot from FreedomPop’s site, and from then on you get anywhere from 500MB to 1GB of free mobile 4G data every month.  It’s as simple as that.

If you want more mobile data than the free plan, they have extremely affordable data plans that are much cheaper than what you’d find elsewhere.  You can also purchase other add-ons to your plan.   The catch?  There really isn’t one that I can find so far. I’ve been using it for well over a year now and it just works great!

Two of the devices are mobile hotspots, while one is a USB device you plug into your laptop.  All three have worked quite well for me, although my go-to device is the Overdrive Pro these days.

When I heard that FreedomPop was going to be releasing a new service, a free cell phone service, I was excited and knew I would have to give it a try.  Who knows, maybe it would be good enough for a low voice and data user like me to cancel my pre-paid cell phone and cut one more cost out of my family budget!

In October 2013 the free FreedomPop cell phone service launched in beta with a limited number of phones released.  Most or all of the phones are refurbished Sprint phones, since FreedomPop is a MVNO on the Sprint network.

The basics of the service are this. You buy a phone from FreedomPop, and select a plan for your phone. The basic level of service is free and includes 200 minutes of talk time, 500 texts and 500MB of mobile data.

So how is FreedomPop able to offer free cell phone service?  Their service doesn’t route phone calls through the cell phone networks like most traditional carriers. Instead, voice calls are routed through mobile data networks, which is cheaper for FreedomPop.  In theory the end user shouldn’t really notice the difference.

When I first looked into the service, the only phone FreedomPop had available was the HTC EVO Design 4G.  Those phones quickly sold out and it was no longer available.

They then launched another phone for the service, the HTC EVO 4G, which is the one that I ended up buying in November. Here is a look at the phone that I bought:

The phones have had limited availability, and you can never be sure if they’ll have any in stock, so check their site here if you’re interested.

After waiting about a month to receive the phone after shipping, kitting and firmware update delays, I finally received it a week or so ago. Here’s a quick look at the unboxing of the HTC EVO 4G that I received in the mail.

Check out a full gallery of the HTC EVO 4G that i received in the mail here: HTC EVO 4G Gallery

You can also bring your own device to the service if you already have one of the approved phones.   Just go to the homepage and then click on the “Bring Your Own Phone” link to check if your phone’s MEID is eligible. If it is, you can then activate your phone for free cell service!

Activating your existing phone could be a cheaper way of getting service without buying a phone from FreedomPop. Currently supported phones as far as I can tell seem to be the HTC EVO 4G, HTC EVO 3D and possibly Samsung Galaxy S II.  That could change as time goes on, however.

So what are the plans that are currently available on the FreedomPop service?  It starts with the free service and goes up from there. 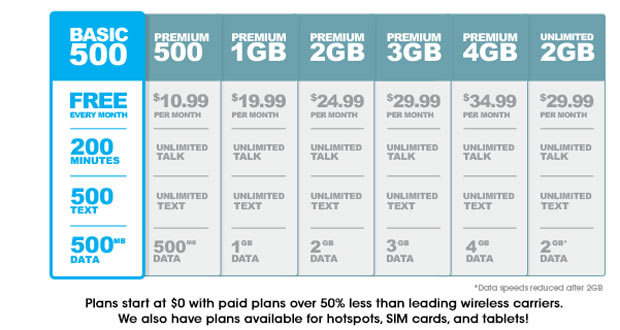 My Experience With FreedomPop Cell Service… So Far

I’ve only had the FreedomPop cell phone service using my new HTC EVO 4G for about a week and a half now.  So far my experience has been decidedly mixed.

In talking with some folks at FreedomPop I was reminded that this was still a beta service, working out some of the kinks. I found that to be the case when I got my phone. Not only did it take over a month to receive my phone due to supply issues, it was also delayed because the phone’s software was updated a couple of times to fix bugs they had found.

When I got my phone there were still plenty of bugs, however. Activating the phone went smoothly and I was up and running in no time. Once I started making phone calls, however, the phone started having problems. The phone calls were choppy and staticky, and in my first 5-6 phone calls I didn’t have a single one that was completed satisfactorily.  I was also having problems with the FreedomPop messaging app which was constantly crashing and at least twice lost several text messages that I had received.

After complaining to support, I was told that they had just updated their messaging app on the Google Play store (the app on the phone that makes calls/texts possible), and after updating the app all of a sudden my phone has started working as it should.

I’ve completed 5-6 phone calls since then that have gone through just fine and have had good voice quality. The messaging app hasn’t been crashing constantly either. So for now, the service is working as advertised.

UPDATE: I’ve been using the phone for several weeks now and since the app update mentioned above it has been working pretty well. I’ve been using this Freedom Phone as my main phone and despite a couple of hiccups here and there where the app crashed, it has otherwise been very stable and I’ve been making phone calls and texts with no real issues beyond a slight delay at times.  As it continues to get better, I am getting closer and closer to considering dropping my other pre-paid mobile phone in favor of this free option.

The FreedomPop cell phone service definitely promises to be a great way for folks to save money on their wireless cell phone bills.  I was excited to try the service, and after a few hiccups it seems to be working relatively well for me.

While the phone service is still in beta, I’m not 100% ready to cancel my old pre-paid cell phone, but I’m willing to give FreedomPop cell service a try.  As the product goes through iterations and updates, I’m sure it will become more stable, and even more of an alternative to traditional (expensive) cell phone service.

Have you tried out FreedomPop cell service? Have questions about how it works? Tell us about it in the comments!

Share30
Pin5
Tweet39
Share4
78 Shares
Last Edited: 13th December 2018 The content of biblemoneymatters.com is for general information purposes only and does not constitute professional advice. Visitors to biblemoneymatters.com should not act upon the content or information without first seeking appropriate professional advice. In accordance with the latest FTC guidelines, we declare that we have a financial relationship with every company mentioned on this site.

Previous Post: Make Just This One Change And You’ll Save Hundreds This Year
Next Post: Money Saving Strategies To Retire Earlier When You Have A Health Crisis