Over a year ago I first heard about a revolutionary new service called FreedomPop that offered free mobile internet to their customers, with no strings attached. I was sure it was too good to be true.

At the time I was paying $35/month for a mobile hotspot from Virgin Mobile, so i was more than willing to dump that hotspot in favor of a free alternative, if it worked as advertised.

I quickly learned that it worked just as good as the paid hotspot I was using, and in fact it was actually the exact same hotspot as I had with Virgin Mobile – on the same network (They’re both Sprint MVNOs).  I ended up saving $35/month by switching to FreedomPop and had the exact same service.

Fast forward a year or so and FreedomPop announced that they were expanding their offerings to offer a free cell phone service alternative. Since I had been using their hotspot for over a year with no problems, I decided to give them a try.

I bought one of the only phones that they had available at the time, the HTC EVO 4G.  The phone is a few years old now, and is on an older version of Android, but it has a decent size screen and works for most of what I want it to do.

I was one of the early adopters on the service, and at first I wasn’t overly impressed.  I had hiccups in voice quality, experienced dropped calls and had other various issues. After a couple of app updates, however, the service seemed to start working as advertised.   I’ve now been using FreedomPop cell service for a few months with no major problems. 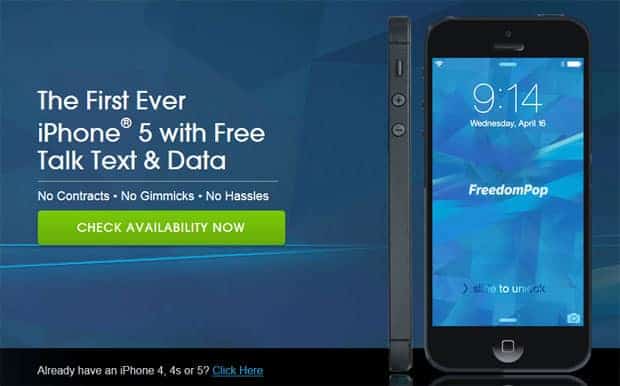 One of the things about FreedomPop that I didn’t like from the beginning was the limited cell phone options. The best option they had available at the time was a 3-4 year old phone, that was no longer cutting edge. It was slow, had an older operating system and couldn’t run all the newest apps.

This week, however, FreedomPop made a big announcement. They are now selling the LTE capable iPhone 5 for their FreedomPop cell service.  So they now have one of the most sought after phones, available for $349 + shipping.  This will be the first LTE capable phone available from FreedomPop.

One article mentioned that they hope to have a couple of upgraded Android phones available within a couple of months as well, including the Samsung Galaxy SIII and S4.  As an Android user, I’m looking forward to that and will probably jump on board for one of those phones.

Current Iphone Users Can Bring Their Own Device

Once you’re activated you’ll be able to choose a local phone number and you’re set to go. In addition to 200 free voice minutes you’ll also get 500MB of free data, and 500 free texts every month.

FreedomPop App On iOS Devices To Save On Voice/Text

Not only can you now use the iPhone 5 (either your own or one purchased from FreedomPop), you can also now download the FreedomPop app via Itunes, and get free voice, texting and voicemail using an iPhone on any cell provider.  (though data charges for your provider would still apply.)

So if you’re tied into a specific provider for some reason and can’t cancel, you can still use the FreedomPop app and downgrade your text and voice packages, saving you money.

There are several phone plans available when you sign up and buy the iPhone. There is the basic plan that gives you 200 free voice minutes, 500 texts and 500MB of data for free every month. Voicemail is $2.49 extra.

The unlimited annual plan gives you unlimited talk and text and 500MB data/month  for $79.99/year, billed once (about $6.67/month).  If you prefer to pay monthly it will cost about $10/month. 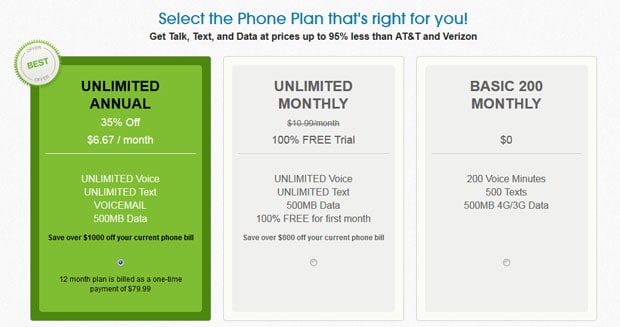 I’ve been using the FreedomPop cell service since the end of 2013, right around the time it was launched. The first few weeks I saw quite a few bugs in the service, most of which were fixed through app updates early in the year.  The last few months I have had pretty rock solid service to the point where I’m considering dropping my other pre-paid cell service altogether. FreedomPop has essentially replaced it already anyway.

With better phone options becoming available, like the iPhone 5, it is becoming an even more attractive option for just about everyone.  From those who just want to supplement their current provider so they can downgrade packages, to folks who just want to replace their cell service with something more affordable.

Check out the iPhone 5 at FreedomPop

Share22
Pin8
Tweet28
Share5
63 Shares
Last Edited: 13th December 2018 The content of biblemoneymatters.com is for general information purposes only and does not constitute professional advice. Visitors to biblemoneymatters.com should not act upon the content or information without first seeking appropriate professional advice. In accordance with the latest FTC guidelines, we declare that we have a financial relationship with every company mentioned on this site.

Previous Post: Managing Our Finances To Be More Generous Givers
Next Post: 3 Advantages Of Having A Side Business