Right around the beginning of the year we started looking to find ways that we could cut our regular monthly bills in order to save up as much money as possible for a down payment on the new house that we’re building right now.

We looked at ways to save on our homeowner’s insurance and auto insurance costs.  We explored how to cut back on our TV and entertainment costs and how to negotiate on your cable TV and internet bills. We also looked at how it’s important to cancel services and accounts that you’re no longer using. We also took a look at how we could cut back on our costs when it comes to our mobile phone, home phone and mobile internet costs. 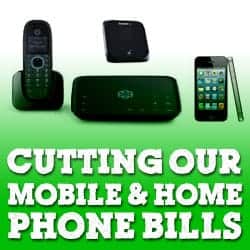 At the time we started cutting costs our phone bills were pretty high.  We were paying over $43 a month for our home phone landline, which we needed for a home security system, and because my wife preferred talking on a home phone.

I also had a mobile hotspot from Virgin Mobile through which I thought I was getting a pretty decent deal on mobile 4G internet for about $35/month.

Quite a while back we also switched our contract cell phones for some nice smartphones from Virgin Mobile, going from a long contract and $40-$50/month (at the time which was years ago), down to unlimited data and hundreds of minutes through Virgin for $35/month.

So all in all we were paying about $178-200/month for our home phone, our wireless phones and mobile internet.

After doing quite a bit of research we dropped our home phone landline in favor of the VOIP service called Ooma.

Ooma is basically a phone service over the internet that you can use your existing phones for.  You buy the base unit from Ooma, and from then on your only cost is about $4-5 dollars in taxes.

We also dropped my Virgin Mobile hotspot in favor of a hotspot from a new company called FreedomPop.  With FreedomPop you just put a deposit down on a mobile hotspot and then you get 500MB of free 4G data every month, more if you connect with others on their service.  I’ve been able to connect with tens of friends to the point that I get 1GB of free data every month.  If you need more data than that it’s very affordable to upgrade plans.

So how are things going now that we’ve been using these more affordable services for a few months, and are the savings worth it?

We’ve been using our Ooma phone service for about 9 months now after canceling our landline back in February.  Our initial investment for the service was the $139.99 for the Ooma Telo device that you need to make the phone calls, and then a one time $40 phone number porting cost so we could keep our old phone number.  After we used the service for about 5 months the cost for the Telo device and porting our phone number was repaid through our savings from what we used to pay for our old landline.  So how has using Ooma been so far – and has it been worth the savings to switch?

After we switched to Ooma we initially had problems because after we canceled our home phone line our DSL internet line went dead.  That meant no phone calls. I had called to confirm that this wouldn’t happen when we canceled our phone, but for some reason it did anyway.  After talking to support it turns out that because our fax machine was still plugged into the old non-existent phone line, it caused problems for the naked DSL internet connection.  Once I unplugged the fax things started working again.

We started using Ooma right away since we had our old phone number still and people just started calling us on our new Ooma line.  Right away we did have a few call latency issues, where you would be talking to someone and there would be a bit of a delay between when they talked and when you would hear them. After making a few tweaks to the Telo device and to our home router, we were able to get most of those issues resolved.

Once we moved and upgraded our internet connection our call latency issues disapppeared, and we’ve now been using it as out main home phone for over 9 months now.

We also love the added features of having the Ooma phoneline, especially the online voicemail where we can check our messages online from a tablet or computer when we’re out and about.

All in all we’ve been extremely happy with our Ooma phone service. We have more features on our phone line, it only costs about $4.53/month in taxes and fees and after another two months our initial costs will have been paid off and we’ll be saving $40 every single month! I’d highly recommend it to anyone, just make sure to have a decent internet connection. If your connection is slow, make sure you or someone you know have good networking savvy in order to get the router settings just right. 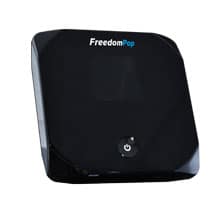 We signed up for FreedomPop a few years ago now. I heard about FreedomPop online because it was touted as being free wireless internet, and at the time I had purchased a wireless hotspot for Virgin Mobile, but had to pay $35/month for it even though I wasn’t a heavy user of mobile internet. I just liked having it available on the go in case I needed to do something for my blog, to check my email, or share an internet connection at a meeting.  FreedomPop solved the problem of the monthly fee by being free after the initial $99 refundable deposit on the hotspot. I could easily pay most of that by selling my Virgin Mobile hotspot. There are upgraded plans with FreedomPop that do have cost, but I’m not a heavy user and didn’t need that.

After I signed up I connected with other users online that use FreedomPop and earned an extra 500MB of data every month, for a total of 1GB of free 4G data. That’s more than enough for some web surfing, some streaming music from Pandora and other online tasks.

The only problem that I had initially when using FreedomPop was the fact that the device I purchased, the Photon 4G hotspot, was 4G only, and the service itself was 4G only as well. The area I live in is just outside of a good 4G area, so it’s hard to use the device there. Thankfully I used the device mainly when I was at work or driving around the Twin Cities metro area, and in those areas it worked great. I got great download speeds and never went over my free data amount.

A couple of months ago FreedomPop announced that they have now partnered with the Sprint network, and they now have 3G available as a backup as well. To facilitate that they released another hotspot that had 3G and 4G connections, and it ended up costing even less at $39.99.  The funny thing was it was the exact same  hotspot as I had purchased with Virgin Mobile for $100!   I decided to get my refundable $99 deposit back for the Photon device and bought the 3G/4G Overdrive Pro hotspot, which now means I can get a 3G backup connection in my home area. The only catch? It costs $3.99/month for 3G backup.

Either way, I’ve been extremely happy with the FreedomPop service, and would recommend it to anyone. The startup cost is extremely minimal, and once you get going  you’ll be saving quite a bit over other services with the major carriers.  Service will be getting even better later in 2013 when FreedomPop starts using the Sprint LTE 4G network, so stay tuned for that. 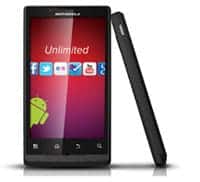 We’ve also been using Virgin Mobile for several years now on their pre-paid smartphone plans. Their plans are extremely affordable for unlimited data and hundreds of minutes for only $35/month. On a major carrier you’d probably be paying closer to $100 or more for a similar plan.

The service works off of the Sprint network and we’ve always had great reception and no issues with the phone service with Virgin.  I’d highly recommend signing up for one of their pre-paid cell phone plans if you’re still on a contract plan with a major carrier. You can still get iPhones and Android smartphones, but you’ll save a ton of money!

Another more recent option is the unlimited talk, text and data for $19/month from Republic Wireless. In some ways they’re a hybrid service where they use a combination of cell and data networks to make your call. I know a lot of people have been very happy with them.

Finally, as of October 2013 you can now also sign up for FreedomPop‘s free cell phone service where you get 200 minutes of talk time, 500 text messages and 500MB of data for free – no cost. Phone calls are made through data services, instead of cell networks. All you have to do is buy one of their phones, or bring your own Sprint phone to the service!  Find out full details at the link below.

I was admittedly a bit skeptical when it came to dropping our current phone and mobile services in favor of cheaper or free alternatives. I figured there had to be a catch, or the service wouldn’t work as well.  So far we’ve been using these cheaper alternatives for anywhere from 3 months to several years, and so far we haven’t found any significant downsides. The upside is that we’re saving a lot of money every month!  If you’re still using your old landline service or an expensive mobile internet or cell plan, I think the time is ripe to drop them, and sign up for more frugal options. Give it a shot!

Have you used any of these services, or have your own cheaper alternative services that you’re using?  Tell us about in the comments.

Share29
Pin22
Tweet
Share6
57 Shares
Last Edited: 22nd August 2019 The content of biblemoneymatters.com is for general information purposes only and does not constitute professional advice. Visitors to biblemoneymatters.com should not act upon the content or information without first seeking appropriate professional advice. In accordance with the latest FTC guidelines, we declare that we have a financial relationship with every company mentioned on this site.