For the longest time I vowed that I would never pay for cable or satellite TV.

For the first 33 years of my life, I didn’t, and I got along just fine.  My wife and I do enjoy movies and TV, but we had found ways to get our favorite shows without paying the high cost for TV service.

This past month my wife and I made a decision to get cable TV.  I didn’t really want to get cable, but my wife wanted to because she doesn’t enjoy the process of watching streaming video through our Xbox as much as I do.

She enjoys the ability to just turn on the TV, flip through the channels and just watch something without having to look up a certain show. She also enjoys  the social aspect of watching TV by being able to talk with friends about certain shows the day after they air.  Me – not so much.

I understand her reasoning for wanting to get service, so I gave in.  However, that didn’t mean I wasn’t going to do my best to get a great deal. 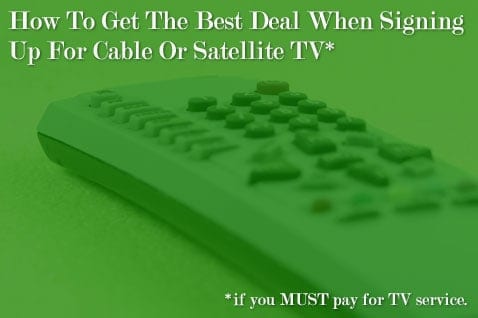 Once we had decided that we were going to get cable TV, I moved into the next phase – research mode.  I started saving all of the cable and satellite TV flyers that we received in the newspaper and in the mail looking for the best possible deal on cable.   The deals I found were ok, but nothing to write home about.   I kept them all just in case I could hobble together a deal of my own.

Next I tried finding a good deal or promotion on TV service through an online reseller or physical store.  A lot of them will have rebate programs available that will give you big incentives if you sign up. One offered me a $100 Amazon gift card if I signed up.  The only problem with a lot of these sites or stores is that most of them are selling you cable service at a higher price than  you should be paying.  For example, for cable tv service with comcast (who we ended up going with), most of the resellers were charging $54.95 for the package we ended up getting for much less.  So you may be getting rebates and bonuses, but you’re paying for it through higher monthly subscription prices.

After checking all the reseller sites trying to find a deal I moved on to one of my favorite resources, online deals forums.  Through those forums I was able to do a search for all of the latest deals that people had been able to find through Comcast, Dish Network and AT&T TV Now .  Many of those deals were much better than anything I had been able to find online or in the newspaper.

After some more research on I found that most people weren’t able to get the great deals on their cable bill just by ordering service through the website, or by phone.  The trick was to go on the company’s online chat and to work with the sales agents on there.  From what I could gather, the agents when you call are actually Comcast employees, and they toe a hard line on giving discounts or special deals.

The chat agents are outsourced, and are more likely to give you a deal.  I found the chat agents much more helpful later on when I was ordering.

After doing our research we finally decided that we’d rather have cable TV service since we didn’t want to have a satellite dish mounted on our garage.

The pricing seemed comparable – as did the channel lineup.  So we proceeded to try and find the best deal through the website,  over the phone and through the online chat.

Cable TV in our area comes mainly through Comcast, so we set about finding the best possible deal on digital cable through them.

Next I called Comcast’s phone agents to see what type of a deal I could talk them into over the phone.  Over the phone they offered me a similar deal to the one I had seen on the website, except they offered to throw in the HD DVR box for 1/2 price.  So it would be $36.99 a month for 6 months for everything.

That’s a little better than on the website, but I wasn’t satisfied.

I hung up and called back to get another agent.  This agent wouldn’t go any further than the other one, they would give me 1/2 off on HD DVR service, but no free premium channels or further discounts.  Even after telling the agents that I knew other people had gotten a better deal, they wouldn’t budge.  Time to move on to the chat.

Through The Online Chat

I clicked on the chat icon through Comcast’s support section, and was quickly transferred to the “sales chat”.

I told the agent that I was trying to get a deal that I knew several other people on the forums had gotten.   I wanted to get the digital starter package for $29.99 with 1/2 price HD DVR, for 1 year without price increase.   I didn’t want to worry about the price going up after only 6 months.

The chat agent quickly agreed to the deal, which made me realize that maybe I could get a little more out of him.  I told him I still wasn’t sure I wanted to move ahead with it.  He said that if I signed up now, he would also throw in HBO free for 1 year.  Normally HBO can cost up to $15/month. With that I agreed to sign up.

So here’s what I got.

Things To Remember When Signing Up For Cable Or Satellite

When buying cable or satellite tv there are a few things you can do to ensure that you get the best possible deal.

Do you have your own suggestions or tips for getting a good deal on cable TV?  Do you have ways that you save on your TV bill?  Have an experience signing up for service that you’d care to share?  Tell us about it in the comments!

Share244
Pin125
Tweet28
Share8
405 Shares
Last Edited: 10th February 2020 The content of biblemoneymatters.com is for general information purposes only and does not constitute professional advice. Visitors to biblemoneymatters.com should not act upon the content or information without first seeking appropriate professional advice. In accordance with the latest FTC guidelines, we declare that we have a financial relationship with every company mentioned on this site.

Previous Post: The 10 Day Give Starts Today! Join Us And Start Giving!
Next Post: Devotional: Building Our Faith