A few months ago I wrote several posts talking about how we were trying to cut our regular monthly bills. We talked about how to save on your housing costs, your property taxes, your entertainment costs, your insurance, your home energy costs and a wide range of other bills that usually suck your wallet dry.

One of the areas we had the most success in saving was in our communications costs, our home phone and wireless bills.  At the time we were paying about $45/month for our home phone service via a traditional landline. For the longest time we had to have a landline for our monitored security system, but when we stopped the monitoring on that system we decided that we could also drop the home phone service if we could find a good alternative.  After doing quite a bit of research we ended up signing up for Ooma VOIP home phone service because it had good reviews on other sites, we could transfer our existing home phone number and because it was extremely affordable.  After buying our Ooma device, we only had to pay about $4.50 every month in taxes for the 911 service.

At the time we were also paying $35/month for mobile internet. I didn’t think that was too outrageous, but then I found a company called FreedomPop that will give you 500MB of free data every month.  I signed up for service with FreedomPop and have been using them ever since.  The mobile internet works just as well as before (because it uses the same Sprint network!), our bill is just 100% less!  We even used FreedomPop for our home internet after we moved when we were having a hard time trying to get our new internet provider to come out and hook up our connection.  Since we used so much data that month, we did have to upgrade and pay a bit for service that month, but it was a good alternative while we waited for service to be hooked up at the house. Stay tuned because FreedomPop is supposedly coming out with a free phone service as well this fall!

So now that we’ve been using Ooma home phone service for over 6 months, I thought I would do a quick review of how we’ve liked it so far, what some of the pros and cons are, and whether we still suggest others use them.

Why We Chose To Use Ooma 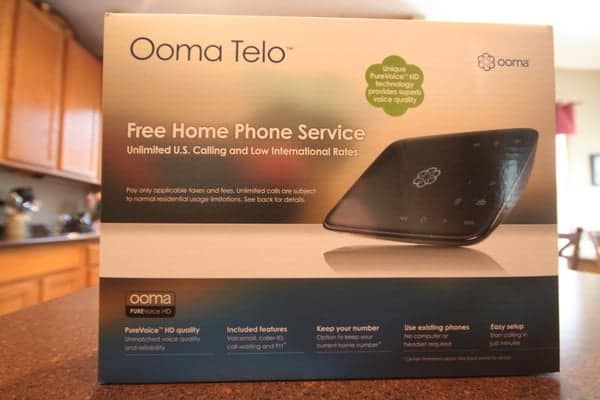 When we were investigating options for home phone service at the beginning of this year, we found a few alternatives that we thought might work.  Among them were:

We dismissed doing other options like VOIP phone service from the cable company because they just cost too much, and we didn’t want to get into a contract with them.

We chose to use the Ooma phone service because:

After receiving it in the mail, we opened up the box and set up the Ooma Telo in no time flat.

While the device only took us probably 15 minutes to setup the first time, it did have it’s hiccups in the first few months. Our first problem was when we would make phone calls.  At times there was latency on the calls, and noticeable delays between when you would talk and when the person would hear you. The result was that we would continually be talking over people, or they’d talk over us, and it was a little frustrating.

Another issue that we had was that the audio quality just wasn’t that good at first, with low sound and audio loss at times. It was extremely frustrating at first.  Then we figured out that there were things that we could to do improve our chance of having a better quality call.

First, we optimized our setup. We setup our router so that it would prioritize the traffic going to and from the MAC address of the Ooma Telo device. If you have the Ooma plugged directly into your modem, it should do this automatically for you through it’s QOS (Quality of Service) settings, but ours was behind our router, so we had to set it up manually.

Second, I realized that with our slow DSL connection it meant that if I was downloading files or streaming video while my wife was on the phone, that was usually when we had issues. From them on I was more careful about trying not to do those things while she was on the phone.

After we did those two things our problems essentially went away.  Since we’ve moved in the past month we got a much faster internet connection as well, and that basically got rid of the other two issues – which originated because of our super slow connection. Now I can stream a couple of movies at the same time if I want to and her calls are just fine.

For us buying and using Ooma was basically a no-brainer.  If the service worked as advertised it would basically save us almost $40 every month after the savings had paid for the initial investment in the Ooma Telo device. For us the we were seeing monthly savings after only 4 months since we paid $140 for the device.  Since the device now only costs $99 for a refurbished unit, you’ll likely be seeing savings even sooner than we did!

So where can you buy the Ooma Telo device and service? You can buy it at any number of places online, but the best prices I’m finding right now are through:

Just be sure to shop around to find the best price.

After using Ooma Telo for over 6 months, we’re definitely very happy with the service. Despite the initial bumps in the road that we have now overcome, we’re now saving over $40 every month on our home service. Not only that, but we’re getting better service than we ever did in the past with our landline provider!

My suggestion? Buy it now!  Just make sure to optimize your setup, make sure you have a decent internet connection and start saving!

Share19
Pin5
Tweet25
Share1
50 Shares
Last Edited: 10th February 2014 The content of biblemoneymatters.com is for general information purposes only and does not constitute professional advice. Visitors to biblemoneymatters.com should not act upon the content or information without first seeking appropriate professional advice. In accordance with the latest FTC guidelines, we declare that we have a financial relationship with every company mentioned on this site.