We’ve all been there.  It’s 2 o’clock in the afternoon, and you don’t feel like doing any of the work you have to do.  Maybe you walk around and find something to distract you, or maybe you check Facebook for the 5th time in an hour just in case anything new is going on since you were last there.  (As if!)

If you’re a fairly productive person, this moment doesn’t happen to you frequently.

If you’re not quite as productive, this moment may happen over and over again, leaving you with very little accomplished at the end of the day.

My friend, for example, is an accomplished artist.  Her drawings look like photos they’re so lifelike.  I have no doubt that she could make an excellent side income with her talent if it weren’t for one personal problem–she’s a terrible procrastinator.  If she has 8 months to get ready for an upcoming art show, she’ll waste 7 of those months only producing a few portraits.  The last month, she’ll crank out the paintings, but even though she’s now working 110%, she doesn’t have enough time to get everything done.

She, and many other people, would benefit from the just-do-something principle.

What Is the Just-Do-Something Principle (Or Productive Procrastination) 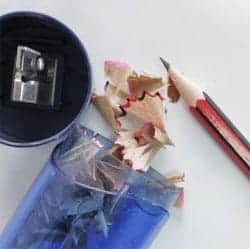 The basic premise is that when you’re faced with a task you don’t want to do, rather than procrastinate and get nothing done, choose to do something else instead.  At least then you’re getting something done.

Let’s say you’re working full-time and taking a college class online.  You have a big paper due in a few days, but you just don’t feel like doing it.  Instead of mindlessly watching a tv show, just do something else that will help you when you finally do feel like writing the paper.  Maybe instead of writing, you go in the kitchen and cook a few meals.  Now, for the next few days, you won’t have to think about cooking.  Instead, you can work on the paper because you’ve freed up more time by making the meals ahead.

This concept also applies to personal finance.  Perhaps you have debt that you’re trying to pay off, and you want to sell a few things around the house.  You just don’t feel like doing it.  You can instead do something financial that you do feel like doing.  Maybe you balance the checkbook and reconcile your budget with your actual spending.  Maybe you search for some part-time jobs you might pursue to make extra money.  The point is, you’re doing something that needed to be done.

Sometimes A Break IS Needed

Of course, sometimes, what you need is to completely disconnect.  Sometimes you’re working on a big project and the best thing to do is take a break and unwind with a book or movie or take a walk.

I’m not talking about those moments.

I’m talking about the little moments that happen every day when you don’t feel like doing something.  Usually, most people decide to just power through, or they just stop productive activity.  A better choice may be to implement the just-do-something principle.

How To Make Productive Procrastination Work For You

If you’re prone to procrastination, try utilizing productive procrastination.  In advance, you can make a large list of things that need to be done this week.  Include even basic household activities such as paying bills, cooking dinner, and grocery shopping.  Make the list comfortably long.  Then, when you feel the urge to procrastinate, choose something from the list instead of surfing the Internet or watching a rerun of The Breakfast Club on TV.  You’ll find that you accomplish much more using this principle.

Share15
Pin3
Tweet24
Share2
44 Shares
Last Edited: 16th September 2013 The content of biblemoneymatters.com is for general information purposes only and does not constitute professional advice. Visitors to biblemoneymatters.com should not act upon the content or information without first seeking appropriate professional advice. In accordance with the latest FTC guidelines, we declare that we have a financial relationship with every company mentioned on this site.