When  you talk about saving money for retirement, one of the first discussions that often comes up is – just how much should I be saving?

If you talk to some folks, like some of the popular money gurus or financial planners, you’ll often get the general answer of anywhere from 10-20% of your annual income.  If you talk to people who are extreme savers, however, they’re likely to give you a much higher percentage – anywhere from 50-70% or even more! 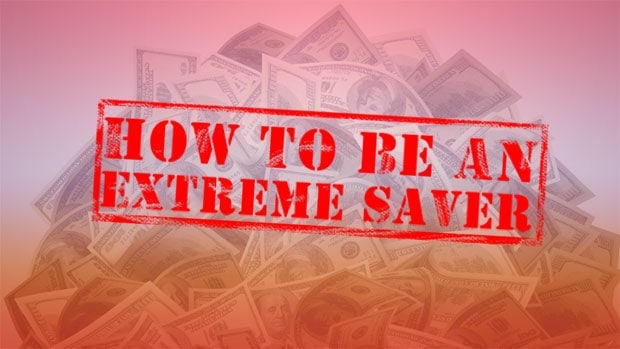 So today I thought I’d talk about the idea of taking saving to the extreme. What are some reasons that people go down this road, what are the benefits, what are the pitfalls, and in the end, how can you save more?

Here’s a discussion of the topic of extreme saving from the Money Mastermind Show this week.

Taking Savings To The Extreme: Just What Is Extreme?

Our country’s savings rate has dropped dramatically over the past 70 years.   According to the Bureau of Economic Analysis if you go back as far as 1944 the average American would save 26% of their income. Granted, it was during World War II and people were skimping and saving during hard times.  Fast forward 70 years to 2014, however, and we have a personal savings rate that is hovering just below 5%.   Not only that, but only 41% of Americans are actually saving regularly.

With so few Americans actually saving regularly, and when those who are saving are on average saving less than 5%, it doesn’t take much to be above average. But there are those who are far above average – saving up to half or more of their income every year.

What Percentage Would I Need To Save At What Age?

When you talk about having enough to live on in retirement, when you are ready to retire can depend heavily on a couple of major factors.  First, how much you’re making each year, and second, how much you can live on – what your lifestyle is.

If you’re consistently spending 100% or more of your income (as many Americans do), you will likely never be ready for retirement – unless you win the lottery or get a large inheritance.

If you were able to live on nothing every year,  save 100% of your income and could maintain that indefinitely, you could essentially retire whenever you want.

Once you start saving the goal is to create a nest egg that essentially reproduces itself and doesn’t reduce in size every year after accounting for your expenses and inflation.  So once you start saving and investing, your initial savings starts compounding and creating more income.  Then the earnings on that income creates more income and so on.

Once your earnings from your savings and investments reach a level where they pay for your living expenses, while leaving enough in gains to keep up with inflation, you’re ready to retire. The book Early Retirement Extreme: A Philosophical and Practical Guide to Financial Independence by Jacob Lund Fisker gives a graph that illustrates the idea of what percentage of income you’ll need to save in order to retire – based on number of years you want to continue working.  Here it is: 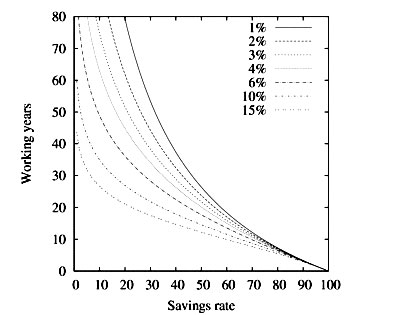 On his site, Mr. Money Mustache breaks it into table form for us, and uses the assumptions that you’ll get a 5% investment return (after inflation), you’ll live off a 4% safe withdrawal rate after retirement and that you’ll want your nest egg to last indefinitely.

So if you look at the table above, for someone who is 30 who wants to retire in 37 years at 67, you’d have to start saving about 20% of your income every year. Bumping it up 5% would mean dropping 5 years off that projected retirement date.  If you start saving like an extreme saver, the likelihood of being able to retire at a much younger age becomes a reality!

What Are Some Benefits To Extreme Saving?

While most people immediately think of all the perceived downsides to being an extreme saver – like not being able to have any fun – they often don’t think of the benefits.

Most extreme savers will admit that saving so much of your income does have it’s downsides:

What Sort Of Lifestyle Change Will You Need To Make?

If you want to become an extreme saver, you’ll definitely need to make some lifestyle changes, especially if you’re like the typical American that over-consumes and under-saves.

What does that mean?  It means simplifying.  Cutting out some things that just aren’t necessary, things that could be considered a luxury.  Cut the cable TV, get rid of the landline phone and drop the daily visit to your local coffeehouse.  Quit the gym and start lifting weights at home.  It may also mean having a lower standard of living where you’re not eating out as much, not spending as much on entertainment,  living in a smaller house and cutting back wherever money is spent. There are a million and one ways you can find to cut, and in reality, once you make the change after a short while you won’t even miss most of the things you’ve cut.

Jacob from EarlyRetirementExtreme.com talks about simplifying his life, but still living relatively comfortably. While he didn’t completely cut out everything, he minimized his possessions, and typically only bought quality items that would last when he really needed something.

everything I truly needed to live well fit into a couple of large suitcases and reduce my expenditures to what is considered somewhat below the poverty level while maintaining a comfortable lifestyle. In terms of quality I live somewhat above the ordinary consumer class standard of living since I own more luxury items but in terms of quantity my life style is quite a bit below.

Your lifestyle change may need to change more or less, depending on how extreme you want to get in your saving, and depending on how willing your family is to join you in your extreme saving.  While you may not get your spending down to the poverty level like Jacob, you can certainly do better than you are now.

Extreme (And Not So Extreme) Ways To Save

So what are some ways that you can save?

Do You Have To Be Extreme To Retire Early?

Saving 60-70% of your income isn’t something that everyone can or want to do  The question is, do you have to be an extreme saver in order to succeed?  Or can you save less but still have a comfortable and enjoyable lifestyle?  I can’t imagine I’ll be heading down the road of being an extreme saver, but I definitely would like to cut back on our expenses, and start saving more.  I’d love for us to save at least 30% of our income, and be able to give away another 10-15%.

So what can we do to head down that road?

For me I want to find a balance between saving more for our future, and still being able to give and live a decent lifestyle today.  I don’t think I ever really plan on fully retiring, but I’m still planning on working hard until retirement age so that I can do more of the things I want to do – and not the things I need to.

What are your thoughts?  Could you ever be an extreme saver – or are you already? Tell us what you consider to be the ups and downs of this lifestyle.

Share102
Pin380
Tweet46
Share7
535 Shares
Last Edited: 1st October 2018 The content of biblemoneymatters.com is for general information purposes only and does not constitute professional advice. Visitors to biblemoneymatters.com should not act upon the content or information without first seeking appropriate professional advice. In accordance with the latest FTC guidelines, we declare that we have a financial relationship with every company mentioned on this site.

Previous Post: How To Sell Your Condo Without A Realtor
Next Post: Tello Mobile Review: Affordable And Customizable Cell Service