I have mentioned more than once recently how my family just built our dream house and moved into it last month. It has been a fun but stressful process, one that I’m glad we won’t have to repeat again for a long time (God willing!).

While moving into our new house only took the better part of a few days, after getting settled in it’s been a long slow process of figuring out what things we need, or want, for the new house.

Some of the things we’ve been buying for the house are definitely wants – things we probably could have done without. Others have been things we really do need now that we live in a normal, non association maintained, neighborhood.  Still others we’re putting on hold or are re-thinking altogether.

While sitting down and entering receipts in the past day or so it really hit me just how much money we’ve been spending. It’s starting to get pretty expensive. 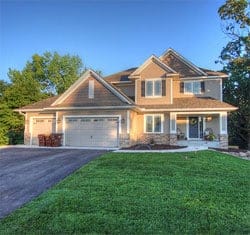 When we were first moved in we set about buying things that we really needed to have at the new house.  Among the things we needed were lawn maintenance tools and accessories, blinds and drapes, and other household goods.

All this stuff is only the beginning.  There are a ton of other smaller things that I’m not mentioning.  Just on the things mentioned above we’ve already spent over $1000.

We’re not just buying things that were needed, however. We’ve given in a bit to the temptation to get everything situated and in it’s place right after we moved.  There are things we could have taken our time with buying, but we haven’t.  Among them:

The things mentioned above come out to $6000 or so, and those are just the things I can remember right now.  If you also factor in other new costs like our new internet access and tv service (which had an installation charge), it gets even more expensive.

Getting Back To Our Normal Budget Soon… I Hope

While some of these expenses listed here were at least expected, some were larger than expected or not expected to happen right away.  We’ve spent around $7000 of our cushion this past month, and the finance geek in me is starting to have a hard time with it.  Thankfully we still have at least 8 months of expenses saved up, so we’re still in a good spot.

On the other hand, I know we’re almost done with these new and non-standard expenses, and once we’re more settled in the next few weeks our budget will get back to normal.  In the meantime I think we’ll be getting back to that monthly budget meeting, to start reigning in both of our spending.

Have you ever been in a situation where your spending was higher than expected, or where expenses started to get out of control?

Share8
Pin3
Tweet14
Share3
28 Shares
Last Edited: 20th September 2013 The content of biblemoneymatters.com is for general information purposes only and does not constitute professional advice. Visitors to biblemoneymatters.com should not act upon the content or information without first seeking appropriate professional advice. In accordance with the latest FTC guidelines, we declare that we have a financial relationship with every company mentioned on this site.