On a recent Money Mastermind Show about student loan debt we had on an interesting guest, Zina Kumok of consciouscoins.com.

Zina’s claim to fame is paying off $28,000 worth of student loans within 3 years of graduating college.

On the show we discussed quite a few topics surrounding student loan debt, including just how accepted it is these days to take on a mountain of student debt and how too many students go to school without a plan for their future career or how to pay off their student loans. 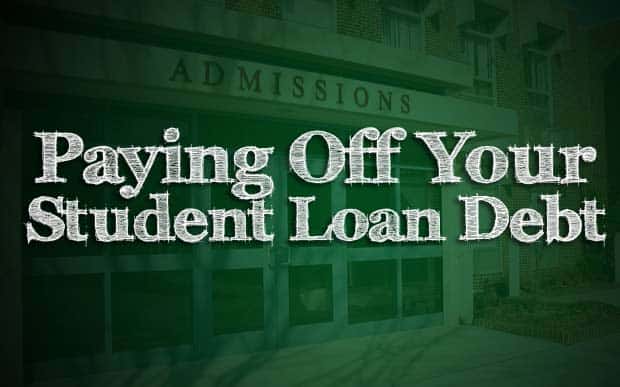 I think we all agreed on the show that how you pay off your student loans is a pretty personal decision based both off of math and psychology.

For Zina, she wanted to pay off her loans as fast as possible, to get rid of the near 7% interest loans she had taken out.

Miranda Marquit, a regular on the show and a contributor to this site, was on the other end of the spectrum. Her loans were sub 2% in interest, and she plans on paying the minimums until it’s paid off – investing her extra money instead.

Today I thought it might be interesting to take a look at some facts surrounding student debt, talk about the pros and cons of paying off your student loans as fast as you can, and then look at what some of the options that people have when it comes to their student debt.

Student debt has been growing over the years, faster than the  inflation rate. According to the economist, since 1983 college costs have risen at a pace almost five times the rate of inflation.

..the cost of university per student has risen by almost five times the rate of inflation since 1983, and graduate salaries have been flat for much of the past decade. Student debt has grown so large that it stops many young people from buying houses, starting businesses or having children.

Not only has the cost of college risen, but more people are having a hard time keeping current on their student loans, in part because graduate salaries have been so stagnant.

The Project on Student Debt, a non-profit, says that 15% of borrowers default within three years of entering repayment. At for-profit colleges the rate is 22%. (source)

Here are a few more factoids about student loans and student debt.

College costs more than ever, and on top of that more parents are saying that their kids should have at least some part in paying for their own education. Since most students aren’t independently wealthy, that means that many are having to pursue alternate methods of financing their education including scholarships, grants and (shudder) student loans.

Should You Pay Off  Your Student Loans?

Yes you should pay them off quickly


Those in favor of paying off the loans argue that any debt is dragging you down and holding you back, even if the interest rate isn’t that high. It’s a constant weight on your shoulders and a psychological drain. You’re better off paying it off as quickly as you can so that you can feel the freedom of not having that debt anymore.

No, you should pay the loans off over time

Those in favor of just paying the minimums on student loans often argue that it’s the lowest interest debt you’re likely to have, and you can probably make more in the stock market by investing.  Pay the minimums, and invest the rest.  If you have a higher tolerance for carrying debt than others, it might be something to consider.

Get Your Finances In Order – Before & While You’re In School

For me, the idea of taking out a ton of student loans is abhorent, and I think most people would be best served by planning out their future – at least to some degree – before they go to school.

Have a plan before you go to school

Think about what you want to do for a career, and choose a school, major and cost that is suitable.  If you’re getting a liberal arts degree like I did, you don’t need to go to an ivy league school. Just go to an in state school with lower tuition.  If you’re going to school for a STEM degree – you may want to consider a better school, but still remember to do your research and find the best school for your money. The most expensive school is not always the best.

Once you’re in school, you’d be best served by making sure you have your finances in order. Most students are not keeping a budget and tend to overspend when it comes to discretionary spending (40% of student income goes to discretionary items such as entertainment, apparel, services, travel, vacation).  The result is they take out too many loans and spend too much money that they’ll have a hard time paying back once they graduate and find the job market is tougher than they thought.

Here are some things you can do when you’re in school.

Strategies For Getting Rid Of Student Loan Debt

So what are some things you can do to get rid of your student loans as fast as you can?

Refinancing Or Consolidating Your Student Loans

One great way to pay off your loans quicker is to refinance your student loans into a loan with a lower rate. While it may not make sense to refinance all of your loans, if you have several that are charging you more in interest than you would get via a refinanced loan, refinancing could save you thousands of dollars!

Check out the reputable companies below to get a quote on a refinanced student loan.

Be creative and you’ll find ways to make the loan payoff happen sooner!

Have your own strategies for paying off student loans?  Tell us what they are in the comments.

Share39
Pin113
Tweet35
Share12
199 Shares
Last Edited: 16th January 2020 The content of biblemoneymatters.com is for general information purposes only and does not constitute professional advice. Visitors to biblemoneymatters.com should not act upon the content or information without first seeking appropriate professional advice. In accordance with the latest FTC guidelines, we declare that we have a financial relationship with every company mentioned on this site.

Previous Post: Bible Verses About Worry: How To Cast Your Cares On Him In The Midst Of Trouble
Next Post: Digit.co Review: Save Money Without Even Realizing It