As a parent, you likely help your child. You may like to spoil them with meals out and nice clothes. If your teen needs $20 on the weekend, you likely give it to them.  You may buy them a car when they turn 16. You may help pay for college and give them spending money so they can relax and have fun in between studying.

Of course, when your children are small, you’re responsible for them in many ways, including financially. However, often parents don’t cut the cord, so to speak, and continue to dole out money to their kids when they are in their 20s, 30s, and even later in life.

If you’d like a solid retirement, though, it’s best to take your child off the family payroll sooner rather than later.

Sound harsh? Perhaps in today’s time it seems that way, but keep in mind 50 or 60 years ago, once a child turned 18, he was essentially on his own.  He’d likely marry by his early 20s, have a house and start his own family.  He wouldn’t turn to mom and dad for financial help unless he was facing dire circumstances.

How An Extended Adolescence Is Costing You Your Retirement 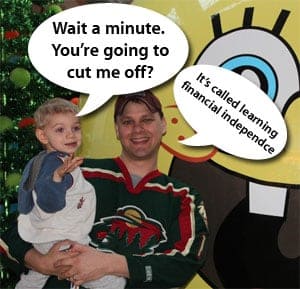 In our modern times, the extended adolescence which sometimes stretches into the late 20s, is costing parents. They continue to pay expenses for their children, often at the detriment of their own bottom line.

That problem by itself is severe. When you add to the mix parents who’ve been generously giving money to their grown children and no longer have a full time income and instead are relying on meager retirements savings, you have a financial nightmare.

Seniors owe more, but they have less money with which to pay the debt.  NPR went on to share the story of a woman who is in her 70s and has supported both of her children who are now approaching their 50s.  The son was a heavy drug user, cleaned up his act, and asked mom to help him fund his new business, which she did to the tune of $40k.  As you can guess, the business failed, and now mom is living off social security because she’s used most of her retirement to support the kids over the years.

How To Cut The Financial Cord

If you want to avoid a similar financial fate, it’s important to teach children when they are young that they will be expected to stand on their own financially once they reach adulthood.

1.  Teach your children how to be financially responsible when they are young.

If they blow through their allowance before the week is half over, don’t give them more money.  Let them experience what it’s like to be without money for awhile.  Sit them down and teach them how to make smart money choices and how to budget.  Even if they become spendthrifts later, they will know how to be financially responsible so they can change their ways.

2.  Don’t buy them everything.

We all want to give our children everything, but often that hurts our kids instead of helping them.  Set aside a certain amount you’ll spend on back to school clothes, for instance.  If your daughter wants to buy expensive designer clothes, she’ll have to come up with the difference.  Take your adult kids out to eat once in a while and pay as a treat, but don’t pay every time.  This adds up fast.

Even if your child is responsible, don’t cosign a loan.  If the bank is asking for a cosigner, that likely means your child is not yet financially ready for the loan she is seeking.

It doesn’t hurt to be explicit with your child and tell him exactly when he is on his own.  For instance, once he graduates from college, he’s expected to handle his own bills and financial situation.

Of course, this isn’t to say that you wouldn’t step in if your child had a serious financial emergency, but if she just needs some extra spending money in her late 20s, she should be on her own.

Teaching your children how to be financially independent in her 20s will go a long way toward helping you preserve your own retirement.  And look at it this way–you’re kids will probably be glad that you’re financially self-sufficient when you retire.

What other suggestions do you have for teaching kids financial independence?

Share33
Pin14
Tweet38
Share3
88 Shares
Last Edited: 25th April 2013 The content of biblemoneymatters.com is for general information purposes only and does not constitute professional advice. Visitors to biblemoneymatters.com should not act upon the content or information without first seeking appropriate professional advice. In accordance with the latest FTC guidelines, we declare that we have a financial relationship with every company mentioned on this site.

Previous Post: Whether Through Tithing Or Free Will Gifts, Giving Is For Your Own Good!
Next Post: Finances Are Important… But Are You Taking The Time To Enjoy Your Life?