If you ask those in the know, our country is on the verge of a retirement crisis.

So the question is this – just how far behind are we falling, and what can we do in order to ensure that our own retirement doesn’t end up in the tank?

Retirement And The Three Legged Stool

In preparation for a recent Money Mastermind Show, I watched the movie Broken Eggs Film. The movie is all about the looming retirement crisis, and how the dream that we’ve all been sold by those in power – a happy comfortable retirement – is in peril. We discussed it on the episode:

One of the filmmakers, Andrew Meadows, explored the idea on the show of how retirement was typically supposed to be like a 3 legged stool, with each leg providing support for your golden years of retirement. 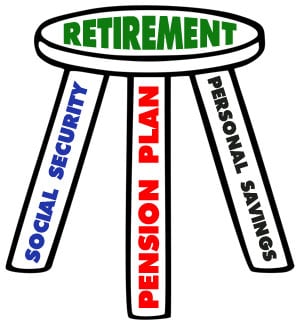 The first leg is Social Security, providing the bare necessities of life, keeping you out of poverty.

The second leg is a company pension. In the past people would often work at the same company for 30-40 years, and when they retired they would be provided with a pension that would help them to have a comfortable retirement.

The third leg of the retirement stool is your personal savings and retirement contributions.

The question is, can we even rely on that 3 legged stool anymore?  And are too many people relying on just the one of those three legs – Social Security? Will their stool even stay standing?

Social Security & Pensions Are No Longer A Sure Thing

One of the ideas discussed in the movie is that Social Security and pensions are no longer as sure a thing as they once were.

First of all, Social Security was never meant to provide a comfortable retirement. It was meant as more of a backstop to prevent those in old age from descending into poverty.  Not only that, but the demographics have shifted significantly since it was enacted, there are far more retirees taking Social Security these days.

In 1950 there were 16.5 workers for every Social Security beneficiary. Today there are less than three workers paying in for each recipient.

The average monthly social security check for retired workers is about $1269 (SSA July 2013), so that doesn’t exactly provide for a high-living lifestyle in retirement!

Pension plans are also having problems nationwide, and many are even going bankrupt.

Pensions, which were once a pretty sure thing, have been harmed by poor investment decisions, mismanagement, down markets and fewer employees giving into the program and a larger number of retirees taking out. We will have about 10,000 baby boomers hitting retirement age every day from now until 2030 (Pew Research Center)!

In my opinion, it’s time for people to realize that they can’t depend solely on the government or their employer for their retirement. They’re going to have to save a majority of their own retirement nest egg!

Retirement Savings Are Too Low & People Are Living Longer 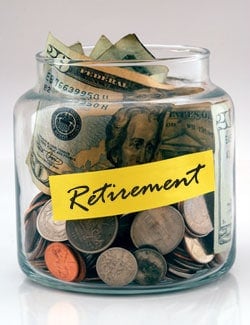 If you can’t depend on Social Security and a pension to pay for your retirement, you’re going to have to rely more heavily on that third leg of the stool, your personal savings.

The problem? American workers aren’t saving! Workers are estimated to be $6.6 trillion short of what they need to retire comfortably (Center for Retirement Research Boston College).

Not only are they not saving, but they’re living longer. Americans who make it to age 65 today can expect to live roughly 18-20 more years. That’s at least 6 years longer than in 1940.

Here are some uncomfortable stats about how much people are saving from the Employee Benefit Research Institute:

Why Are People Not Saving For Retirement?

The question is this: Why aren’t people saving? Some ideas:

Unfortunately many of the assumptions people are making are erroneous, in my opinion.  People have their head in the sand about just how much money they’ll need, and just how high their costs may be.  It’s time to realize that you need to save for yourself, not depend on underfunded government programs or a shaky, mismanaged pension.

Steps To Take To Get On Track For Retirement

So what can you do in order to ensure that your retirement savings plan is on track to provide for you in your golden years? Here are a few ideas.

The clock is ticking. The longer you delay finding solutions for your own retirement, the uglier the solutions are going to have to be.

Start saving now so that your future self will be able to retire, and do the things you want to do.

What are your thoughts on the looming retirement crisis? Have you done enough to plan ahead for your retirement? Are you saving more than the average person?

Share29
Pin614
Tweet35
Share7
685 Shares
Last Edited: 14th May 2015 The content of biblemoneymatters.com is for general information purposes only and does not constitute professional advice. Visitors to biblemoneymatters.com should not act upon the content or information without first seeking appropriate professional advice. In accordance with the latest FTC guidelines, we declare that we have a financial relationship with every company mentioned on this site.

Previous Post: What Should A Grandparent’s Role Be Financially In Their Grandchild’s Life?
Next Post: The Grow Your Dough Throwdown 2.0 May Update – Blogger Investing Challenge With Motif Investing