When winter is deep and I’m ready for it to end, one way I get through is to think about planting a garden and all the promise that lies therein.  There’s something so fascinating about watching a little seed come to life.

This year, in early April, I started some seedlings in my house.  I excitedly watched them grow; I watered them and set them out in the sun.  Then, in mid-May, I planted my little, delicate seedlings in the ground.  I was full of hope and expectations.

And that very night, there was a frost warning.

And the next night, there was another.

And then one more.  I didn’t have the heart to check my little plants.  When I finally did, just as I expected, they were dead.

Thanks to more unusually cold weather, we had to wait until end of May to start over.  We bought some tomato and basil plants at the nursery, but because I’m cheap, we started everything else from seed again.  Now, 5 weeks later, the garden is slowly filling in.  The kale and collard greens are finally beginning to look substantial.  The Swiss chard is finally recognizable. 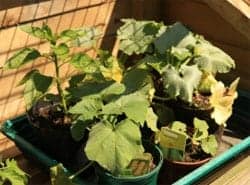 Yet, when I look around at all the other garden plots in our community garden, it’s easy to be discouraged.  Without a doubt, ours is the saddest garden plot of the 18 that are there.  Our plants are too small; our garden is easily weeks behind the others.

While I was checking on the garden and lamenting its sad state, it occurred to me that gardening is a lot like retirement planning.

If you’re wise, you start saving for your retirement when you’re young, very young, perhaps even in your teens or twenties.  A woman at the community garden began her tomato seeds indoors in February; she’ll be harvesting tomatoes in just a few weeks.  Like those who start their savings early, she is on track to have a bountiful garden.

I started my seeds in April, which was a tad late.  Maybe it’s like becoming serious about retirement planning in your early thirties.  There’s still time to have a decent retirement, but it won’t be quite as comfortable as someone who started earlier.

Still, had there not been the frost, I would have been able to harvest some baby bok choy that I planted by now.  Isn’t that like life, though?  Despite the best laid plans, something happens.  You’re laid off or you experience an illness, and just like that, all your hard work and diligence can disappear.

The state of our garden now is like someone who begins their retirement planning in earnest in their 40s.  Our garden is definitely late to the game.  Every other garden looks better than ours, and it’s easy to be discouraged.  The simple fact is that because we started over later, we will likely not get as much from our garden as we would have had there not been the frost.

But the point is to keep on working and not become discouraged.  Our plants will grow, and come late July and August, we will be harvesting.  We won’t get as much as we would have, but we will still get some produce.  There’s still time to catch up.

Retirement planning can feel overwhelming.  If you don’t start until your forties, you can feel like it’s a losing proposition, but it’s not.  Yes, it would have been better to start earlier, but what matters now is how much you can put aside now.  Although it’s not desirable, there are people who start saving for retirement at a relatively late age.

Share19
Pin3
Tweet
Share3
25 Shares
Last Edited: 15th July 2013 The content of biblemoneymatters.com is for general information purposes only and does not constitute professional advice. Visitors to biblemoneymatters.com should not act upon the content or information without first seeking appropriate professional advice. In accordance with the latest FTC guidelines, we declare that we have a financial relationship with every company mentioned on this site.

Previous Post: Why Buying Used Is A Smart Money Move And How To Avoid Being Selectively Squeamish
Next Post: Could Simple Be Better When It Comes To Your Investment Portfolio?