We’re only a few days into the new year, and many people like to take this time of year to look forward with high hopes and good intentions.

At the beginning of the year, most people resolve to live their lives differently.  They plan to lose weight, get in shape, make more money, save more money, find love, the list goes on and on.  Many of these goals are only spoken, however.  After a half-hearted attempt, people often give up, and quickly.

In fact, according to the San Diego Reader, “88% of these resolutions will never be achieved.”

This year, do things differently.

Look Back and Recognize Your Successes

Often, the most important way to look forward is to first look back.

Where have you been?  What have you accomplished in 2016?

You may feel that you haven’t accomplished much, but that likely isn’t true.  While you may not have accomplished what you would have liked, you have likely accomplished a portion of it. 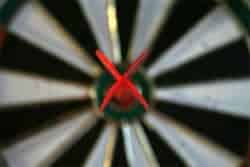 For instance, we were heavily focused on debt repayment this year.  However, we had several months where we went backwards and actually lost momentum.  Most people (us included) tend to focus on the negative.  However, if I look back over the entire 12 months of 2016, I see that despite the setbacks, we still paid off $10,000 this year.  That is nearly $850 a month to debt repayment.  Sure, I would have liked to have paid down more, but now we owe $10,000 less than we owed a year ago at this time.

Honestly looking at your progress can give you confidence looking forward.   When you clearly analyze what you have accomplished, you recognize that you did more than you may have initially given yourself credit for.

Often, people get discouraged if they set unrealistic goals.  That is why SMART goals are so popular.  Other people, like myself, enjoy setting big, hairy audacious goals.  Even if I don’t accomplish them, I am still further ahead than I would be if I didn’t set such large goals.

Finally, looking back at your progress can help you set a time frame for your new goals.  Before you do something, you can guess how long it will take you, but you don’t know for sure.  If some of your goals are continuations of 2016 goals, you will be better able to set a time frame.

For instance, if you had a goal to lose 20 pounds in 2016, you may have wanted to complete that goal by March.  It may have actually taken you until June.  Now, if you want to lose another 20 pounds, you know that last year it took you roughly 6 months, so that is a good time frame for your 2017 goal.

Many of us are so eager to end the current year and start the new year fresh that we jump into goal setting without taking the time to look back at our progress.   Knowing where we have been, and how long it took to get there, can help us all set more realistic goals that are more likely to be accomplished in 2017.

Do you take the time to reflect on all that you have accomplished in the previous year before moving on to the new year?

Share29
Pin
Tweet25
Share3
57 Shares
Last Edited: 3rd January 2017 The content of biblemoneymatters.com is for general information purposes only and does not constitute professional advice. Visitors to biblemoneymatters.com should not act upon the content or information without first seeking appropriate professional advice. In accordance with the latest FTC guidelines, we declare that we have a financial relationship with every company mentioned on this site.