Today is April 15th, and it appears that economic impact payments passed as part of the CARES Act, also known as 2020 stimulus checks, are now being direct deposited into people’s accounts.

If you haven’t received your stimulus direct deposit yet, and you did not file your 2018 or 2019 taxes, you may need to go to the government site for “non-filers” and enter your payment information.

For most people the coronavirus stimulus checks are sorely needed with millions of new people filing for unemployment in the past few weeks due to the COVID-19 pandemic.

It is estimated that the 4 week total for unemployment claims will top 22 million, roughly one in eight in the workforce.

If you’re out of work due to a layoff, furlough or other reason it’s important to file for unemployment insurance right away, and then to look into making sure you’ve done everything you need to in order to claim your first stimulus check.

With individuals able to claim a $1,200 payment, and couples collecting $2,400, the money should help plug some holes. If couples have eligible children under 17 they can also collect $500 per child.

A hypothetical family of 4 (like ours!) would be able to collect an economic impact payment of $3400.

With the stimulus payments starting to go out today, people are already starting to talk about a possible second stimulus check.

Today we’ll explore what people received for the first stimulus payment, who was eligible to receive it. Then, we’ll explore the following question:

Will there be a second stimulus check for 2020?

The “In Case Of Emergency Binder” is over 90 pages of simple, printable worksheets to organize everything your family may need to know in the event of an emergency, like the current one. Learn More about the ICE Binder.

As the COVID-19 virus began to spread it was clear that extraordinary measures would need to be taken in order to give help to states, businesses, the health care industry and to individual taxpayers.

To date we’ve had 3 coronavirus aid packages passed by Congress and signed into law by President Trump.

Who Is Eligible For The First Stimulus Check?

With the first stimulus checks being sent out let’s examine all of the details about who gets them.

First of all, who is eligible to receive the first stimulus payment?

Just about anyone that has a Social Security Number and who isn’t claimed as a dependent on someone else’s return. They just have to make less than the income phaseout range to earn the full refundable tax credit.

If you qualify for the payment based on your 2018 return, but not your 2019 return, you may want to hold off on filing 2019 because you may be able to receive the payment. From what they’re saying economic impact payments will not be clawed back if people don’t qualify based on their final 2020 taxes.

So let’s look at a few of hypothetical scenarios:

Example 4: A couple files taxes married filing jointly and has one child 17 years of age, and one at 21 years of age. Both are still claimed as dependents. The couple makes $199,000 in income. They would get $0 for filing jointly as a couple since they’re over the income phaseout limit, and then $0 for the children since they’re both over 16 years of age. The two children cannot claim their own individual stimulus payment either since they are claimed as dependents on their parents tax returns. The entire family would receive no stimulus payment.

There are a thousand different possible scenarios. The key is to figure out where you fall with your adjusted gross income as an individual or family, calculate if you can claim your kids for the extra $500 based on their age.

For a more in depth discussion of who is and isn’t eligible, please see our full post on the 2020 stimulus check.

Is There Going To Be A Second Stimulus Check For 2020?

On or around April 15th the economic impact payments included as part of phase three of the coronavirus aid packages started to be deposited into taxpayer accounts. Here’s one from another publisher below.

Checks will start to go out in following weeks, with checks going to those with lower income first.

Ever since the CARES Act passed and was signed into law on March 27th, there has been quite a bit of talk that one round of stimulus payments for individuals and business might not be enough.

From the Wall Street Journal:

As lawmakers last week completed a record-shattering economic-rescue package estimated at $2 trillion, Senate Minority Leader Chuck Schumer (D., N.Y.) predicted: “This is certainly not the end of our work here in Congress—rather the end of the beginning.”

Legislators from both parties, administration officials, economists, think tanks and lobbyists are already roughing out the contours of yet another emergency-spending package—perhaps larger than the last—to try to keep the coronavirus crisis from turning into a 21st-century Great Depression. Many expect the debate to begin in earnest by late April.

The article talks about how in the week after the phase 3 stimulus package was passed, that they were already talking about extending the stimulus/aid package into a phase 4 aid package. Among the things they floated that they’d like to include:

All of this is hypothetical at this stage, and lawmakers made clear that they want to give the phase 3 plan time to work so that they know better what type of additional measures might be necessary to give our economy a boost.

One question hanging over what is already being called “Phase Four” is whether that spirit of urgency and compromise can continue as the downturn advances. Or, will Washington return to the polarization that has often paralyzed Congress in recent years—especially as the November elections erode incentives for cross-party cooperation?

Another concern: Legislating amid travel restrictions and the risk that more in Congress come down with the disease.

Policy makers and economists will need to assess in coming weeks whether the most recent package does enough to tide over companies and workers through the end of the shutdown—whenever that occurs—or whether prolonged closures require another dosage of the same medicine.

President Trump has mentioned that they are now considering a second round of stimulus payments. Congressional leaders and President Trump have stated publicly that another recovery package might be necessary.

Even before Americans get to cash in their stimulus payments, President Donald Trump is floating the idea of a second round. At Monday’s news briefing, Trump said a second set of direct payments is under consideration to help blunt the economic impact of the coronavirus pandemic.

“We could very well do a second round,” Trump said. “It is absolutely under serious consideration.”

In a later tweet Trump signaled something else for phase 4.

In a tweet, Trump said infrastructure should be the focal point of the phase-four stimulus package. Aid to healthcare and broadband infrastructure will likely get bipartisan support in Congress, according to The Hill.

House Speaker Pelosi has said she would like direct payments to be a part of a second round.

Pelosi has said that another stimulus should include a second round of direct payments. This month, many Americans taxpayers received stimulus checks of up to $1,200 for single filers and up to $2,400 for married couples. But many congressional Democrats have said that the $1,200 check, which barely covers what the average American spends on rent and utilities, doesn’t go far enough. Pelosi’s plan would also give more aid to states, cities, small businesses, health systems, and first responders, Politico reported. ABC News reported that Pelosi hoped to bring the phase-four stimulus package to the House floor in late April.

At this point both Democrats and Republicans have brought measures to Congress to supply an additional $250 billion in small business funding to shore up measures from phase 3, but both competing measures have failed.

Possible Second Round Of Stimulus Checks

This past week we have seen several competing proposals for additional stimulus payments in Congress.

At this point the very earliest we would likely see details of any concrete phase 4 plan would be after Congress returns to the Capitol on May 4th.

So for now, take advantage of your stimulus check from the first round, and stay tuned for details on a phase 4 stimulus package.

We’ll update here as to what ends up passing (if anything), and let everyone know if there will be additional direct stimulus payments to taxpayers.

In the meantime, what would you do with the money if you received a second stimulus check? Have you received the first stimulus yet? Tell us in the comments.

Create Your Own Income Stimulus Package

While we’re waiting to hear about whether there is going to be another stimulus, it might not be a bad idea to start creating your own stimulus package of sorts. Every little bit of income helps right now.

Here’s a few posts that talk about ways to make some extra money in the midst of the downturn. 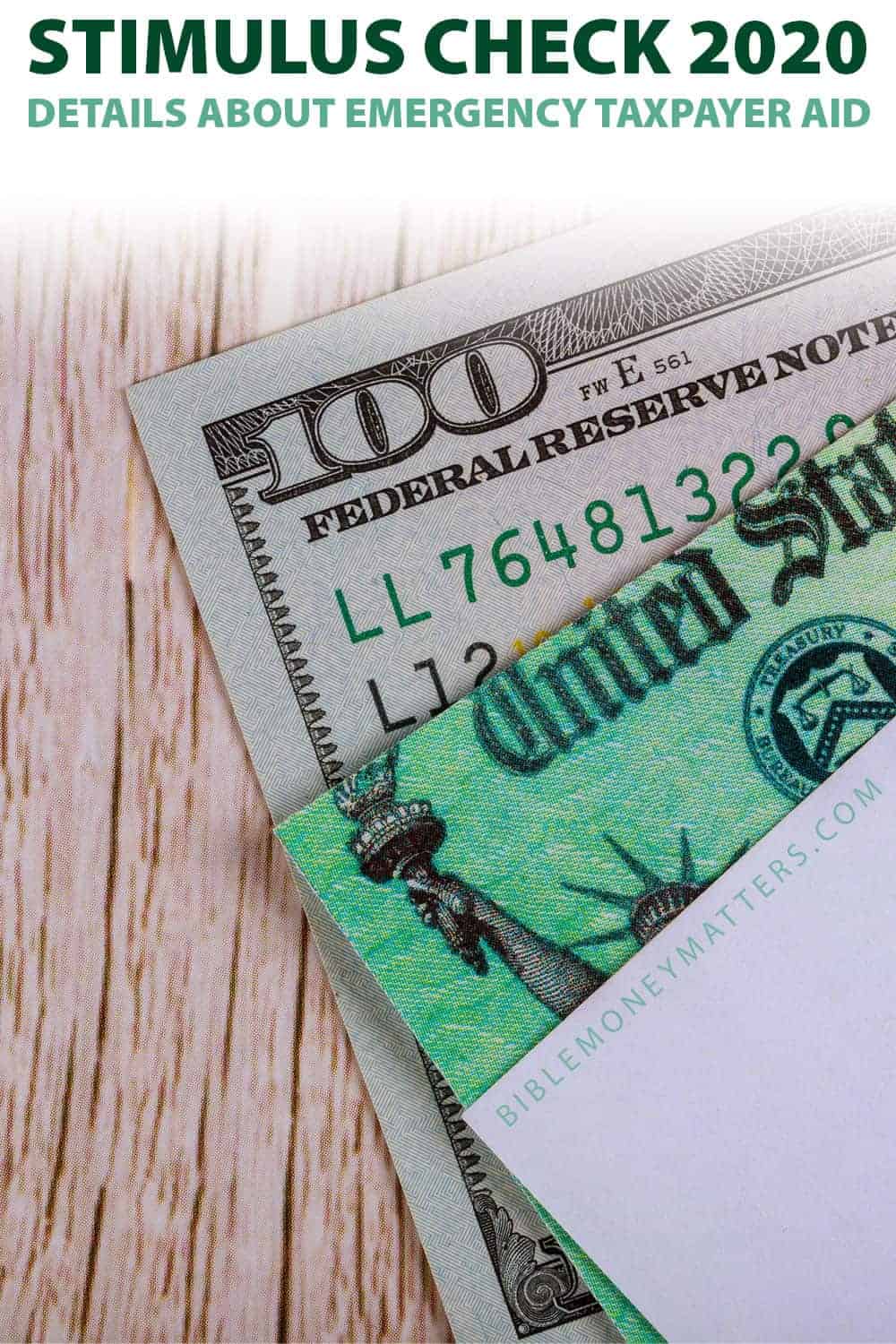 Share472
Pin6
Tweet37
Share
515 Shares
Last Edited: 3rd May 2020 The content of biblemoneymatters.com is for general information purposes only and does not constitute professional advice. Visitors to biblemoneymatters.com should not act upon the content or information without first seeking appropriate professional advice. In accordance with the latest FTC guidelines, we declare that we have a financial relationship with every company mentioned on this site.

Previous Post: Bible Verses About Anxiety: Scriptures To Remind Us That God Is In Control
Next Post: 15 Best Cheap College Textbook Rental Sites