I‘ve been writing about Lending Club for quite some time now, but usually from the viewpoint of an investor. I’ve invested in 100+ loans over the last two years, and thus far I’ve been extremely happy with the experience. I’ve been pretty careful about the loans that I invest in, and I think because I’ve been so careful, I haven’t yet had any of my loans default.

One thing I have neglected to write about much in regards to Lending Club is how you can also use the service as a borrower, and now it may be more manageable as they’ve added a 5 year term loan for borrowers. 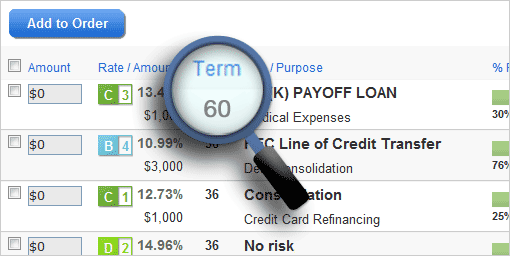 Using Lending Club As A Borrower

I’m never the one to suggest that people take on new debt.  I’m a huge advocate of saving up and paying cash for the things you buy, and I think I’m actually allergic to creating new debt.

I do understand however, that sometimes people make poor decisions, or have created debt before they started being more careful about their finances.  In instances where people have a variety of high interest debt, I actually think it’s a good idea to consolidate those debts into a lower rate, and cut the amount of interest you’re paying, while you pay the debt off.

Debt consolidation has gotten a bad name in recent  years, and most likely deservedly so as there are a million debt consolidation companies out there who are fly by night operations, not doing anything for you that you couldn’t have done yourself (and charging you an arm and a leg to do it!)  A good number of them are actually crooked (be careful!)

So what’s the key to having debt consolidation be a good thing for you?  You need to remember these things:

There have been a lot of folks who have used Lending Club in order to help them consolidate higher interest credit card debt, home equity loans and other high interest debt.  Just remember, it can be used as a helpful tool, but if you don’t use it correct, it can become a curse as well.

Make a plan, be careful about what debts you consolidate and start paying your loan off as fast as possible!

Check out Lending Club as a borrower

Have you used Lending Club to consolidate your debt?  Were you happy with the experience? Tell us how it worked for you!

Share12
Pin14
Tweet13
Share3
42 Shares
Last Edited: 3rd February 2014 The content of biblemoneymatters.com is for general information purposes only and does not constitute professional advice. Visitors to biblemoneymatters.com should not act upon the content or information without first seeking appropriate professional advice. In accordance with the latest FTC guidelines, we declare that we have a financial relationship with every company mentioned on this site.

Previous Post: How Much Of A Financial Fighter Are You?
Next Post: Registration For FinCon14 In New Orleans Has Opened! Here Are 10 Reasons Why You Should Attend