I‘ve been investing in Lending Club for several years now, and over the years I’ve seen my returns go up and down. Despite a few defaults I’ve never really seen my returns dip below 9-10%. Those kind of returns are nothing to sneeze at.

Lending Club has gone from the new kid on the block with an untested business model, to the biggest player in the peer-to-peer lending arena, being recognized for their revolutionary investing model. In January 2014 they originated over $258.4 million in new loans!  Even Google is recognizing their potential as they recently bought a minority interest in Lending Club.

It’s been a while since I did an update on my portfolio’s performance. Admittedly, it’s not as big of a portfolio as I’d like, but now that we’ve closed on our house and paid our 20% down payment, we’re ready to start investing more. Before we jump in, however, let’s look at some Lending Club news.

Lending Club #5 On Forbes Most Promising Company List For 2014 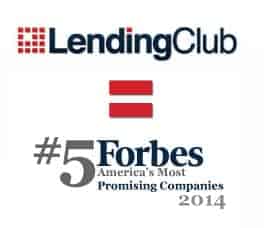 Last month Forbes announced their list of 25 of the most promising companies for 2014.   Lending Club has been listed for the past couple of years, last year at number 12 on the list, and the previous year at number 20.  This year they move up to number 5 on the list after another great year, including a nice round of investment by Google.
Here is the methodology used by Forbes in their list:

Over the course of four months we reviewed hundreds of applications from businesses across the country. The final assessment is based on growth (both in sales and hiring), quality of management team and investors, margins, market size and key partnerships. Then we spoke to each company to make sure we didn’t miss anything. Producing a ranking in the opaque world of privately-held companies is never easy. But we’re confident that many of these are the IPOs and billion-dollar acquisitions of tomorrow.

It’s nice to know a company that I’m using is being honored for their innovation and sound business practices, and I look forward to another great year for Lending Club!

In the last year or two my Lending Club returns have had some hiccups, as I’ve had a slew of charge-offs and late loans.

My returns about a year and a half ago topped out at 12.22%, and since my charge-offs happened the returns have dropped below 11%.  Over the past year, however, the returns have slowly been improving to the point where they’re now back up to 11.46% as of this month.

If you view the new “adjusted net annualized return” numbers that Lending Club includes, that accounts more for the late and in default loans, I’m still around 11% returns.  Still not too bad, and better than my other retirement accounts.

Since I started with Lending Club I’ve had 11 charged off loans, and have another 5 loans in default or late.

One thing Lending Club and Prosper have been criticized for in the past was that their numbers showing your return on investment were overly optimistic, and that they didn’t take into account the age of loans, future default rates, and so on.

Lending Club has recently made updates to their site that means you can now view an adjusted net annualized return that will take past due notes into account, and give you a more realistic number.  I think I mentioned that my returns on the adjusted value were 11% instead of 11.46%.  So ROI is slightly lower when taking into account those past due notes.

In looking at my returns on the analyzer, my actual return according to the site will be closer to 10.62%.

Here’s the basic strategy I’ve been using with Lending Club since I started investing. The strategy has changed a little bit over time to include a lot more low grade loans since I’ve actually seen a better ROI on those loans.

Share10
Pin15
Tweet17
Share2
44 Shares
Last Edited: 17th November 2017 The content of biblemoneymatters.com is for general information purposes only and does not constitute professional advice. Visitors to biblemoneymatters.com should not act upon the content or information without first seeking appropriate professional advice. In accordance with the latest FTC guidelines, we declare that we have a financial relationship with every company mentioned on this site.

Previous Post: Overspending? Is There A Medical Reason For It?
Next Post: Spending And Your Friends: What Happens When You Have Differences In Income?