Lending Club announced earlier this week that they had originated over $1.65 billion dollars in personal loans given to borrowers since the company launched in 2007. The numbers have continued to rise in recent months, with loan volume increasing and the number of new investors coming on board increasing at an even faster rate.

You may have noticed that the number of Notes listed on our Web site has recently been lower than usual.  This is not due to any slowdown in Lending Club’s growth — April will be our largest month yet, with roughly $140 million in loans issued, a 10% increase over March and more than triple our volume in March of last year.  More loans than ever are hitting the platform.

The decrease in visible loans is due to recent record inflow of investors and capital over the past two months (we signed up 2-3 times more new investors last month than average).  This capital is causing loans to be fully committed very quickly after listing — usually within 24 hours.

So despite the fact that over $140 million in loans were issued on Lending Club this past month, the number of notes listed on the site at any one time has been lower than usual because so many new investors have been signing up for the service. I guess the word is out about how effective an investing platform LC is, and the new investors are coming in in droves, snatching up loans within an average of 24 hours of their appearing on the site.
So what is Lending Club doing to address it? They’re planning on reducing investor acquisition efforts to a degree, spreading larger investments over time and working on an automated investment tool that can invest for you when a loan with your parameters shows up.  It should be available later this year. Some investors will be happy to hear that news, allowing them to automate their investing a bit more.  I’m sure others will continue to want to be more hands on. 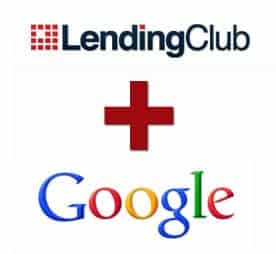 The news about Lending Club is getting out, and other companies are taking notice. This past week Google stepped up to the plate and bought a minority interest in Lending Club!

As part of this investment David Lawee will take an observer seat on the Lending Club Board alongside existing Board members including Mary Meeker, John Mack and Larry Summers.

“Few companies have such an in-depth understanding of the Internet as Google,” said Lending Club CEO Renaud Laplanche. “We believe our relationship with Google will be very helpful in better serving our customers. We couldn’t be more excited to have them on board.”

Google seems to have recognized what a revolutionary product Lending Club is, helping to reshape the financial industry.  They’ve made an investment in Lending Club now and will have an observer seat on the Lending Club board.

The last time I did an update on my returns with Lending Club I’d had a rough couple of months with my account showing a run of 5-6 charged off loans.  Right before that happened my net annualized returns had topped 12.22%, but I knew my strategy of investing in more low graded loans would have it’s risks, namely that more of the loans would go late or go into default.

Over the many years I’ve been with Lending Club now, up until this last run of charge-offs I had only see 1 loan go into default. I’ve now had a total of 7 charged off loans, along with 2 more being late.  Within the past month or so one of my late loans got back on track, so I’m now down to one late loan and 142 issued and current loans.

Even with my recent defaults, my returns are still doing well with the returns bouncing back a bit from last time again topping 11 percent. 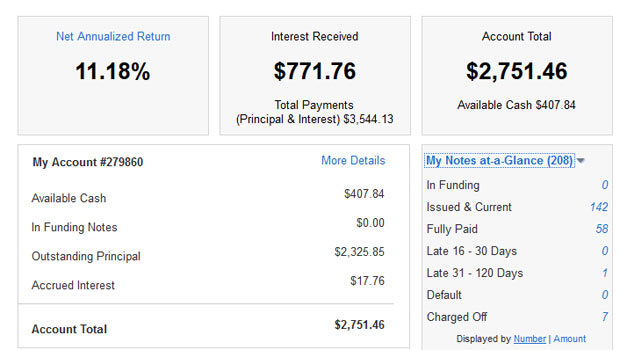 Nickel Steamroller’s Lending Club portfolio analyzer, which has recently been re-designed a bit, does a better job of giving you an idea of your actual ROI. Basically the analysis tool with give you an estimated ROI after you download all your notes from your Lending Club account and upload the .csv file. It will go through you notes and give sell recommendations, show duplicate notes and highlight notes that are below Lending Club’s average return (so you can sell them on the secondary platform). It will even give you a fun little map showing where your loans are (see mine above).

In looking at my returns on the analyzer, my actual return according to the site will be closer to 10.28%. It also gives me quite a few sell recommendations, particularly on some of my older lower interest loans that I did when first starting out. Those particular loans tend to be grade A or B, and have interest below 8%. I’m sticking with some of them for now, but down the road I may lean more towards the lower grade loans in my portfolio. 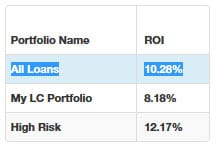 Here’s the basic strategy I’ve been using with Lending Club since I started investing. The strategy has changed a little bit over time to include more low grade loans and more loans with higher balances.

Share19
Pin3
Tweet22
Share1
45 Shares
Last Edited: 17th November 2017 The content of biblemoneymatters.com is for general information purposes only and does not constitute professional advice. Visitors to biblemoneymatters.com should not act upon the content or information without first seeking appropriate professional advice. In accordance with the latest FTC guidelines, we declare that we have a financial relationship with every company mentioned on this site.

Previous Post: 5 Signs You Are Financially Ready To Retire
Next Post: An Emergency Fund Is More Than Just Money In The Bank: You May Have More Money Available Than You Think