I‘ve been investing with Lending Club for a couple of years now, and I’ve gone from a skeptic when I first started investing with the service, to someone who is convinced that Lending Club can be an integral piece in any person’s investing strategy. I’ve seen good returns since I started, and despite warnings from a variety of sources about how the site was a flash in the pan and not something you’d probably want to put your money in, I’ve stuck with it. Over the years I’ve used the site I’ve only had one loan get charged off.  Since I was diversified, however, I’m still getting 11.44% returns. Not too bad.

This past week Lending Club announced that they had reached $500 million in loans originated since inception (2007), further showing just how strong the platform is.

Lending Club, the leading platform for investing in and obtaining personal loans, today announced that $500 million in loans have been originated via the platform since inception.
Lending Club serves the needs of prime consumers who choose the lower interest rate loans available through Lending Club over more expensive credit cards.

The San Francisco-based company commenced operations in 2007 and has exceeded 100 percent growth in loan volume each year since. More than a quarter-billion dollars in loans were originated on the platform in 2011, more than doubling the previous four years combined. Lending Club now averages more than $1 million in loan originations per day, with an average loan size of $10,945. The majority of borrowers (66.7 percent) say they use Lending Club’s fixed-rate personal loan platform to pay off their high-interest credit cards.

So Lending Club according to their site is originating more than $1 million in loans per day.   I would say that they’re here for the long haul, and if you haven’t checked them out yet, you should give it a shot!

Returns Increase To 11.44% And Another Late Loan

This past month my Lending Club account had it’s first charged off loan in over 2 years of using the site.    While it was disappointing, thankfully I didn’t lose much on the deal because the loan was over 1/2 paid off already.  Despite the charged off loan, my returns increased this month again to 11.44% as I added more “high risk” loans.   Unfortunately I had another loan go into the “16-30 days late” category.  We’ll see if they get back on track, it shows that they have scheduled a payment. 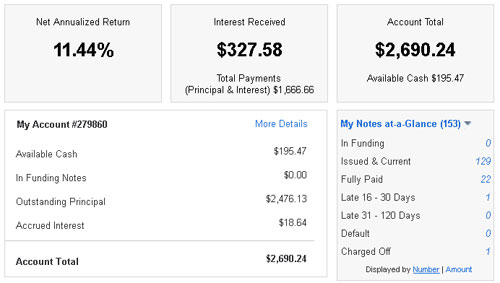 NOTE: Did you know that 100% of investors who have invested in 800 notes or more had positive returns. Not too shabby, not everyone in the stock market can say that!

When you’re looking at the numbers on the Lending Club and Prosper sites, it has been pointed out time and again that their numbers are overly rosy view of what your  actual return on investment will be.  The ways that they calculate the ROI isn’t really standardized, and they don’t take into account how old your loans are, possible future default rates, or other things that may become a factor.  The numbers they show are just something you have to take or leave.

A site that I discovered a while ago that gives what I think is a better picture of the actual ROI you can expect is Nickel Steamroller’s Lending Club portfolio analyzer. Basically the analysis tool with give you an estimated ROI after you download all your notes from your Lending Club account and upload the .csv file. It will go through you notes and give sell recommendations, show duplicate notes and highlight notes that are below Lending Club’s average return (so you can sell them on the secondary platform).  It will even give you a fun little map showing where your loans are (see mine above).

In looking at my returns on the analyzer, my actual return according to the site will be closer to 10.33%.

Those are still better than the returns I’ve seen in the stock market this year, or in my savings account.

Here’s the basic strategy I’ve been using with Lending Club over the past couple of years.  I’ve fudged on this a bit in the past few months due to the fact I’m buying more low grade loans, but it still holds mostly true.

Share1
Pin
Tweet20
Share2
23 Shares
Last Edited: 10th February 2014 The content of biblemoneymatters.com is for general information purposes only and does not constitute professional advice. Visitors to biblemoneymatters.com should not act upon the content or information without first seeking appropriate professional advice. In accordance with the latest FTC guidelines, we declare that we have a financial relationship with every company mentioned on this site.

Previous Post: Why You May Want To Get A Life Insurance Policy Even If You Don’t Have Kids
Next Post: How I Ended Up With A $5000 Dollar Tax Bill This Year. Oops!