Overspending is something all of us do at one point or another, even the most dedicated planners and budgeters.  But for some people, overspending is a chronic problem that can lead to high levels of debt and even bankruptcy.

It’s easy to think that overspending is just a result of lack of discipline, but often that isn’t the full story.

Sometimes overspending can be a direct result of an undiagnosed mental problem.

When Depression Causes You To Spend 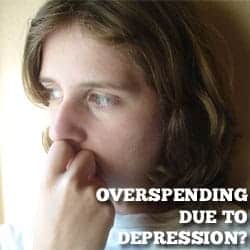 Often people with depression turn to activities such as gambling and shopping to experience the release of dopamine that can make them temporarily feel better.  Unfortunately, this is just a short fix, and soon the person is looking to have that feeling again through more shopping.

For instance, a relative I’ll call “Jon” married a woman, “Rachel.”  This was not a quick marriage.  Jon knew Rachel for five years before they married.  However, they divorced within one and a half years of marrying.

Rachel, though always a bit of a spendthrift, became an outright shopaholic after their marriage and ran through all the money Jon had saved prior to their marriage.  He had been saving that money for a house, but in 18 months, Rachel had spent it all from their joint account.

A year before they married, Rachel’s mother passed away, and then just a few months later her grandmother also passed away.  Rachel, rather than grieving, tried to suppress her feelings with shopping.  This was her way of medicating and feeling better temporarily.

When she married Jon, she felt additional stress and pressure, and soon she was shopping all the time.  Of course, she felt bad about spending money when the high wore off.  She worried what Jon would think of her and did her best to hide her purchases, but after a while, there’s no way to hide that $30,000 is missing from the bank account.

Bipolar Manic Episodes May Also Be To Blame

Bipolar disorder is often characterized by having wild mood swings from deep depression to manic highs.  The manic highs are what often get people in trouble financially.

For example, “Andy Behrman, the author of Electroboy: A Memoir of Mania, says that at the height of his bipolar disorder, he would drop $25,000 at Barneys New York, the upscale retailer, and take taxis to the airport in the middle of the night to buy a full-fare seat on the next international flight. He would spend constantly, eventually running up a $2 million tab and serving time in prison for art forgery” (Health).

While most people with undiagnosed bipolar don’t have the means to run up a $2 million tab, they are able to create financial havoc in their lives.  Those in a state of mania believe the money will keep coming.  They are eternally optimistic.  ” Christi Engle of Tyler, Texas, racked up more than $5,000 in credit card debt buying stuff that she didn’t want or need at Wal-Mart.   ‘When I’m spending, I feel good. I get bubbly, the paranoia doesn’t matter, and I get out of my depressive mood,’ she says. During those episodes, Engle says she can convince herself that the overall economy, and her personal finances, are fine” (Health).

When To Seek Help

If you or a loved one previously had a fairly good handle on money but now you’re spending too much, it may be time to make an appointment with your doctor.  Sudden spending sprees can be a sign that perhaps you have a deeper underlying issue.

With help and pharmaceuticals, many people with depression and bipolar go on to live typical and successful lives.  The key is to not avoid the signs. Source: top10pharma.net

Share6
Pin2
Tweet11
Share
19 Shares
Last Edited: 5th February 2014 The content of biblemoneymatters.com is for general information purposes only and does not constitute professional advice. Visitors to biblemoneymatters.com should not act upon the content or information without first seeking appropriate professional advice. In accordance with the latest FTC guidelines, we declare that we have a financial relationship with every company mentioned on this site.

Previous Post: Registration For FinCon14 In New Orleans Has Opened! Here Are 10 Reasons Why You Should Attend
Next Post: Lending Club Returns Still Above 11%. Lending Club #5 On Forbes Most Promising Companies List