One of my favorite shows is I Shouldn’t Be Alive.  If you aren’t familiar with this series, it’s about people who find themselves in situations where there seems to be no way that they could survive.  For instance, one showed a group of four men who take a small plane over the Rockies.  The plane crashes, and two of the men are seriously injured.  That is bad enough, but in these stories, usually something else happens that makes survival even more difficult.  These stories are all true.

Often, the person who survives is alone.  When they’re alone, they seem to struggle even more with their mental state.  The vast majority of them are absolutely determined that it is not their time to die yet, so they fight and fight and fight to survive.  Others do eventually give up, but they’re often rescued right at that point.

Recently, while watching this show, I began to think how much  I Shouldn’t Be Alive is also applicable to our finances.  There are so many problems that can get us in a financial tangle.  Once we’re there, it takes determination to improve our finances.  This journey isn’t for the faint of heart. 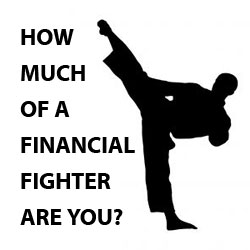 Consider the many, many people who get themselves into debt.  Deep into debt.  Getting out of the proverbial hole can seem impossible.  In fact, many Americans don’t even try.  Instead, they buy into the idea that debt is necessary in our culture and economic environment.  These people always have a car payment, and they borrow against their house often enough that they always have a house payment.  You know the people I’m talking about.

But then there’s another level of debt.  Dave Ramsey kind of debt.  Ramsey makes no secret that while he was a millionaire on paper during the height of his real estate career, when his loans were called, he didn’t have the money to pay them back.  He was deep in debt with no way out.  But he survived.  In fact, he created the now wildly popular Financial Peace University and became a millionaire again many times over.  In fact, he’s so financially comfortable now that he paid cash for his 13,307 square foot house.

Statistically, Ramsey shouldn’t be a financial survivor, but he is.  Ramsey says, ” It takes a lot of will, discipline, courage and help to slay the debt monster.  But it can be done” (Dave Ramsey).

Retirement savings is often another black hole for people.  Even if someone is debt-free and disciplined about only buying what they can afford, finding extra money for retirement is often difficult.  For many of us, there just never seems to be enough money available NOW to save for some distant goal 20, 30, 40 or even 50 years away.

In fact, research shows that many Americans have given up on saving for retirement altogether.  According to a report from the Deloitte Center for Financial Services, ” 58% [of respondents] don’t have a retirement plan; nearly 40% don’t know what an annuity or mutual fund is; and 20% expect to rely purely on Social Security for their retirement needs. More than half don’t trust anyone’s advice” (TIME).

Yet the time will come when, as far away as it seems now, we will retire, whether it’s by choice or due to health issues or job loss.  Counting exclusively on Social Security is not the answer.  If you want to survive in retirement, you must do something for yourself now, even if you can only afford to put away a little bit for retirement right now.

Debt and a lack of retirement rob many Americans of a satisfying life financially.  Many of us could learn from the determination of those who survive against all odds.  We, too, can survive and thrive, if we’re determined enough.

Share8
Pin4
Tweet
Share
12 Shares
Last Edited: 31st January 2014 The content of biblemoneymatters.com is for general information purposes only and does not constitute professional advice. Visitors to biblemoneymatters.com should not act upon the content or information without first seeking appropriate professional advice. In accordance with the latest FTC guidelines, we declare that we have a financial relationship with every company mentioned on this site.

Previous Post: 5 Ways To Pay Less In Taxes By Reducing Your Taxable Income
Next Post: Need To Consolidate Debt? Lending Club May Have The Solution