If you’ve been disappointed the last few years by the historically low interest rates that you’ll find when signing up for a “high yield” savings account, you may be considering your options when it comes to where you put your savings.

Since those savings accounts probably won’t be seeing their rates go up by any significant amount in the near future, a lot of people are now considering putting their money in alternative account types.  Anything from investing in peer-to-peer lending to a more liquid investment account like the ones at Betterment.com.

If those account types still sound too risky for your tastes, one stable savings vehicle a lot of people are trying are CDs.

What Is A CD (Certificate Of Deposit)

CDs, which stands for Certificates of Deposit, in some ways are very similar to a typical savings account.  You can purchase a CD at most of the same banks where you would open a regular savings or checking account.   The CD account is different from those other account types in that they aren’t nearly as liquid because when you buy a CD you are committing to holding your money in that account for a set period of time.  They can range anywhere from 3-6-9 months to a year, 2 years, all the way up to 5 years.

What do you get in return for agreeing to keep your money in the bank for that set period of time?  You get a higher rate of interest than you would in a regular savings account, and it is guaranteed for the term of the CD.  In essence you’re trading liquidity for a higher rate. 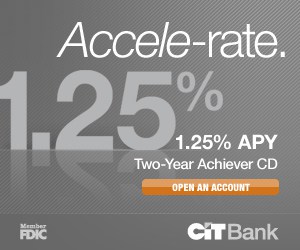 So to recap, the main points to remember about a CD are:

What a lot of people will do when putting their money into a CD is create what is called a CD Ladder.  CDs with different terms carry different interest rates. So for example a 5 year CD will hold much higher interest than a 6 month term CD.    Because of that it would seem to be a good idea to put all your money in the 5  year term CD – except for the fact that that your money isn’t very liquid.

A CD ladder is an attempt at helping you to keep some of your money’s liquidity, while still achieving a higher earnings and interest.  It’ll also help to hedge your bets against rates going up or down.

What you do to create a CD ladder is start saving at the beginning in CDs with different terms.  So for example, to keep it simple, let’s say you want to save in CDs with terms of 1 year through 5 years. Here are some example of rates from CIT Bank as of 10/2012:

Then you wait.  After the first six months, when the first 6 month term CD expires, you would take that money, turn around and invest in a second 5-year term CD.   So then your investments would look like this:

So basically you’ll always have at least $1000 of your money a year away from being liquid in case you need it.  Your interest rates will slowly be going up as well because eventually you’ll just have 5 laddered 5-year CDs.

Pros And Cons Of A CDs And A CD Ladder

When considering whether you should set up a CD ladder, there are some pros and cons you should consider.

Have you ever set up your own CD ladder, or have you considered doing it? Tell us your thoughts on the CD ladder, and on CDs in general in the comments.

Share7
Pin2
Tweet42
Share3
54 Shares
Last Edited: 20th December 2018 The content of biblemoneymatters.com is for general information purposes only and does not constitute professional advice. Visitors to biblemoneymatters.com should not act upon the content or information without first seeking appropriate professional advice. In accordance with the latest FTC guidelines, we declare that we have a financial relationship with every company mentioned on this site.

Previous Post: Save Money on Groceries Through Food-Buying Programs
Next Post: What Is An Exchange Traded Fund (ETF)? What Are The Benefits? Should I Consider Using One?