Lending Club launched a couple of years back and along with a few other companies helped to create a whole new banking paradigm, one where people lend their money to other people and get better returns on their money than if they had saved with a traditional bank. In turn, the people who are borrowing end up getting a lower rate than they may have at a traditional bank, and are able to save some money in the process.

While the road hasn’t been without it’s speed bumps, Lending Club has weathered the storm, and in my opinion has become the premier peer to peer lending site around.  While others are starting to catch up to them in some respects, like the folks at Prosper, I still think they’re the gold standard when it comes to P2P lending sites.

I’ve been pretty happy with the returns that I’ve seen with my Lending Club account.   When I first started using it I was expecting that I would put a small amount of money into it, and that I would probably see some defaults here and there.  I wasn’t ever expecting to put anything more than a bit of fun money in there, and I didn’t think the returns would be as good  as they’ve been.  I thought they might be a bit better (after defaults) than what I’m seeing at my high yield savings account.  The reality has been much brighter.  I’m currently making over 10.5% on my invested money after just over 2 years, and I’ve yet to see a single default.  At the same time I get to have the good feeling of helping others to get loans at lower rates than they would get at a traditional bank or via a credit card. It’s a great way to consolidate higher interest debt.  So how are my returns right now, and what strategy am I using?

So here’s a quick look at the returns I’ve been seeing lately after including more high risk loans over the past 8 months or so. 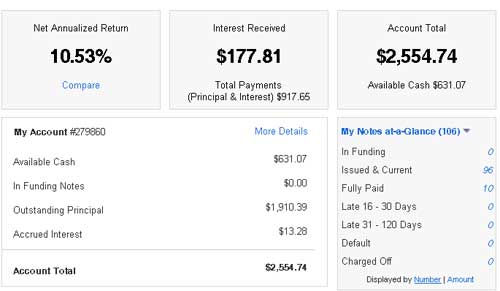 As I’ve mentioned in the past about 8 months ago I modified my investing strategy a bit based off of the plan laid out by Matt at steadfastfinances.com. He started a Lending Club investing club where he would hand pick loans every week or two, based off of his own investing criteria.   Part of his strategy was investing in lower grade loans to borrowers who he thought would be good risks.  Most of the loans he was looking at and choosing were higher risk C or D grade loans,  for people with lower credit scores, but who had a  good high paying professions, solid job histories and job security, and good payment histories.  Using his strategy he was seeing in excess of 14% returns at one point.

Using his strategy I’ve been able to get my returns from somewhere in the 8-9% range to up over 10.5% in about 8 months. I’d like to see if I can get my net annualized return up even closer to 11-12% by continuing this strategy.

Here’s where my NAR stands now, slightly above average. I hope to move up a couple of columns there: 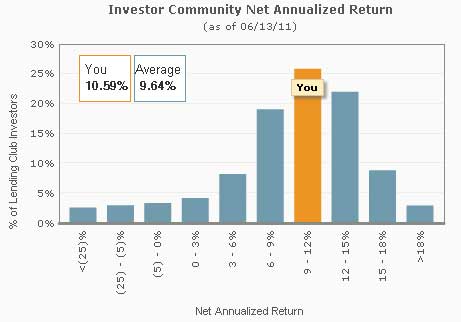 My Strategy For Investing With Lending Club

My strategy I used in the past for Lending Club, and the strategy I’ll still be using to some degree:

Share
Pin
Tweet20
Share4
24 Shares
Last Edited: 8th November 2012 The content of biblemoneymatters.com is for general information purposes only and does not constitute professional advice. Visitors to biblemoneymatters.com should not act upon the content or information without first seeking appropriate professional advice. In accordance with the latest FTC guidelines, we declare that we have a financial relationship with every company mentioned on this site.

Previous Post: 401k Contribution Limits And Rules For 2011
Next Post: 7 Ways To Save Money By Negotiating Rent