Lending Club has been around for about 5 years now, and in that time it has grown from a small startup to become the next big thing. It has become, in my opinion, a legitimate option for people looking to add new investments to their portfolio, and the fact that they’ve had 21 consecutive quarters with positive platform returns shows that they’re here to stay.

San Francisco-based Lending Club has experienced tremendous growth since it began in 2007, with facilitated loan volumes doubling each year and on pace to triple in 2012. With $82 million in personal loans facilitated in the month of October, Lending Club is also on a $1 billion annual run rate.

“The platform has now reached a scale and stability that makes it even more attractive to borrowers and investors,” said Lending Club CEO Renaud Laplanche. “Larger commitments from a wider base of investors mean a faster funding process for qualified borrowers, and higher loan volumes mean more choices for investors and more efficient pricing overall.”

Lending Club reduces the cost of traditional banking to offer borrowers better rates and investors better returns. The platform’s growth has been largely fueled by borrowers looking for lower rates. More than 72 percent of borrowers on the platform report using their personal loans to pay off existing credit card balances. By focusing on high-credit-quality borrowers, Lending Club’s platform has also generated 21 consecutive quarters of positive returns.

So Lending Club has been a win for just about everyone so far. Borrowers get lower rates than they may have been able to get at a traditional bank, and investors get returns on their money that they probably wouldn’t have seen in the stock market over the past few years.

A few months ago I saw my Lending Club returns top 12% for the first time. Since then my returns haven’t dipped below that number, but they have had a bit of up and down.  This month they’re back up to 12.22%, the highest it’s ever been!

Since I topped 12% I’ve seen several loans go late, and had at least one more of them get charged off.  Of the loans that are late, several of them are later in the loan, so don’t have nearly as much to pay off as some of the others (good for me!). One of the late loans just updated, and apparently the borrower was just found to be deceased. That’s the first time I’ve had that happen, and I’m assuming that the loan may get charged off as well.  Sad. We’ll see what happens with that one. 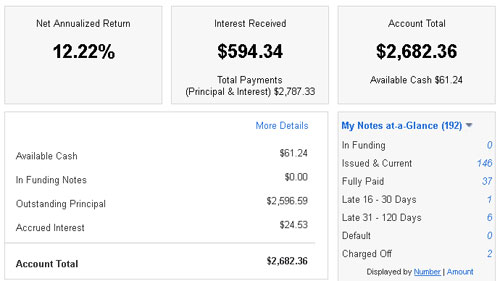 NOTE: Over 98.9% of all investors with 100 or more Notes have experienced positive returns. 100 Notes can be purchased with a minimum investment of $2,500.

Nickel Steamroller’s Lending Club portfolio analyzer does a better job of giving you an idea of your actual ROI. Basically the analysis tool with give you an estimated ROI after you download all your notes from your Lending Club account and upload the .csv file. It will go through you notes and give sell recommendations, show duplicate notes and highlight notes that are below Lending Club’s average return (so you can sell them on the secondary platform). It will even give you a fun little map showing where your loans are (see mine above).

In looking at my returns on the analyzer, my actual return according to the site will be closer to 10.45%. It also gives me quite a few sell recommendations, particularly on some of my older lower interest loans that I did when first starting out. Those particular loans tend to be grade A or B, and have interest below 8%. I’m sticking with some of them for now, but down the road I may lean more towards the lower grade loans in my portfolio.

Here’s the basic strategy I’ve been using with Lending Club since I started investing. The strategy has changed a little bit over time to include more low grade loans and a few loans with higher balances.

Share9
Pin2
Tweet11
Share1
23 Shares
Last Edited: 7th November 2012 The content of biblemoneymatters.com is for general information purposes only and does not constitute professional advice. Visitors to biblemoneymatters.com should not act upon the content or information without first seeking appropriate professional advice. In accordance with the latest FTC guidelines, we declare that we have a financial relationship with every company mentioned on this site.

Previous Post: Government Is Instituted By God, But We Need To Pray And Vote To Keep It Accountable
Next Post: Hotels Too Expensive? Try These 6 Cheap Lodging Options