There can be any number of reasons why you might find yourself not making as much money as you would like.

For our family, we decided that I should quit my full-time job that I did not enjoy so I could stay home and raise our children rather than paying more than $2,000+ a month in childcare costs.

That decision was the best for us personally, and probably one of our worst decisions financially. 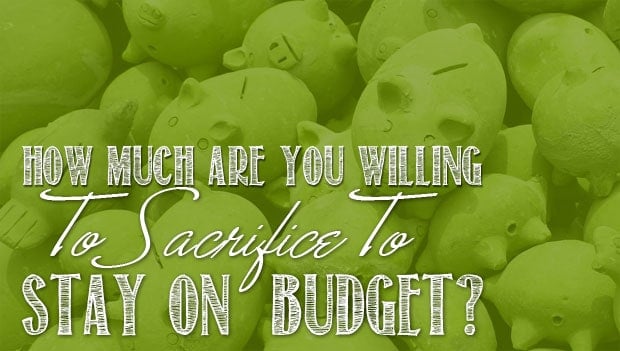 Do You Really Sacrifice To Stay On Budget

For the first year after I quit my job, we lived pretty much the way we had lived when I had my job.  We did not sacrifice much. . .and the debt started accruing.  I’m ashamed to admit that during that time, we still went out to eat and we still continued to pay for my son’s high priced private school program because we didn’t want to pull him out and disrupt his education.

But in late 2011, we faced the reality of our growing debt and started sacrificing, big time.  We sacrificed family time so I could grow a side business.  We sacrificed sleep, and we sacrificed our health to make extra money to pay down our debt with gazelle intensity.

Now that our debt is halfway gone, we’re slowing down on debt repayment, but we’re still sacrificing.  We don’t have smart phones (only pay as you use Tracfones that we rarely use) and we don’t have cable.  Our car is 10 years old and has 130,000 miles on it.  Our daughters would love to take dance class, but we can’t afford it right now.  Every expense is scrutinized.

Sometimes this lifestyle can feel like a drag, but mostly I’m proud of how responsible we’re finally behaving and how our finances are improving, little by little, every month.

Reminding myself that I’m not alone is also useful.

Struggles Of The Frugal Famous

In the 1990s, I was a big fan of Amy Dacyczyn, author of The Tightwad Gazette.  She and her husband decided that she should be the stay at home parent to raise their six kids.  They sacrificed enormously but loved the freedom their penny pinching gave them.

As a frugal zealot, Amy sometimes wrote about trying to help people understand that they, too, could improve their financial situations if they were willing to make some changes.  However, most people bulk at lifestyle changes, so her promptings often fell on deaf ears, much to her frustration.  She was also known for saying that people who still have cable tv don’t get it and aren’t truly trying to live a frugal lifestyle.

The Economides, also known as America’s Cheapest Family, decided early on in their marriage that Annette Economides would be a stay at home parent, and Steve Economides would work outside the home.  As a family of 7, money was often very tight.

Annette shares the sacrificing they made to make their budget work, saying, one time “a furniture truck drove up to our neighbor’s house.  The wife had bought a dining room set.  I looked at our little garage sale orange-brown-plaid sofas, and I just sat and cried.  But I was determined.  I cried because I was sad, but I still was not tempted to go out and buy new furniture on credit.  That wasn’t an option” (The Old Schoolhouse).

Likewise, Michelle Duggar, in her book, The Duggars: 20 and Counting, writes about her and her husband, Jim Bob’s financial struggles early in their marriage.  One of their older daughters, who was quite young at the time, really wanted a pink blanket.  The Duggars couldn’t afford to buy it for her, but by God’s providence, when Jim Bob towed a car for his towing business, a pink blanket was found in there.  Since the owner never claimed the car, their daughter finally got her pink blanket.

You might ask yourself, as I did, “A pink blanket?  Really?  Those cost like $8!  They couldn’t afford one of those?”  But the Duggars, and the Economides, and the Dacyczyn’s knew their financial limits and weren’t willing to exceed them no matter what.  That’s how they all went on to financial greatness, owning homes outright and living a life very different than the rest of us financially.

How extreme is the sacrifice you’re willing to make to stay on budget?

Share9
Pin29
Tweet
Share1
39 Shares
Last Edited: 3rd April 2014 The content of biblemoneymatters.com is for general information purposes only and does not constitute professional advice. Visitors to biblemoneymatters.com should not act upon the content or information without first seeking appropriate professional advice. In accordance with the latest FTC guidelines, we declare that we have a financial relationship with every company mentioned on this site.

Previous Post: How Are You Saving For Your Child’s College Education?
Next Post: Monthly Checklists To Stay On Top Of Home Maintenance Tasks