You may have heard of the Economides.  They are a family of 7 who made a name for themselves thanks to their penny pinching ways.  They’ve been able to get ahead financially and save money even though they were a one income family for most of their marriage and even though they had 5 children who are now grown.

Now, the Economides are teaching others how to be financially responsible and save for their futures.  I recently saw them interviewed on U.S. News Money, and what struck me was something that Annette Economides said at the end of the interview (at minute 8:52):

“The other thing that I think is a common mistake that Americans are making today is debt.  The middle class is really almost no different than the low income because they don’t own anything.  They have no accumulated wealth.  They have car payments, they have house payments, they have credit card payments, they have school loans.  There is no accumulated wealth.  The only difference between the middle class today and the low income is that they have a degree or they have a better career or they have a better looking car or house.  So they earn more money, but they’re not accumulating.  Their net worth is about zero.  They are three to six months away from homelessness if they lose their job.” 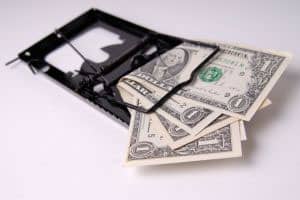 Are You Middle Class But Saddled With Debt?

We’ve set a goal to get my student loan paid off by the end of summer, but the irony that I’m no longer even using my degree (I was a teacher for 10 years but quit 3 years ago) is not lost on us.  The degree was earned, I worked in that field, quit, and now, 3 years after I quit the job, the loan will finally be paid off.

We’re actually in a better position than most because our car is paid for and we don’t yet own a home.  However, we do have those pesky student loans and one credit card to pay off.  We’ve set aside $800 a month to pay down debt (which is more than the minimum we have to pay), and we funnel as much extra money on the debt as we can.  We are probably averaging $1,000 a month on debt repayment.

Essentially, that is $1,000 a month that we don’t have to accumulate wealth as Annette Economides says.  That’s money that can’t go in our retirement fund or our children’s college fund.  It’s money that can’t be used for a house payment or to build up a 6 to 12 month emergency fund.

Basically, that debt reduces our income by $1,000 a month, and without factoring in that money, we are indeed at the low income level of earning.

Take One Action To Prevent This Situation

Steve and Annette Economides offer a solution to this problem at the end of the interview:

“I would say today, be careful about that debt that you’re taking on.  It’s one thing to have debt for one thing, but by the time you take on debt for five different things, you’re up to your eyeballs.  So one of our mantras is to keep our overhead low.  So we would never take on payments.  What we would do is save the cash in advance and buy the thing for cash.  We remodeled two kitchens, paid cash for our cars, and paid cash for all of our vacations.  Basically we determine what money we have, and then we determine what we’re going to buy.  It’s not the other way around.  One of the things we say is that debt destroys and frugality frees.  I wish more Americans would realize that.”

Are you middle class but feel like you’re living a low income life because of your debt burden?

Share17
Pin2
Tweet19
Share1
39 Shares
Last Edited: 10th February 2014 The content of biblemoneymatters.com is for general information purposes only and does not constitute professional advice. Visitors to biblemoneymatters.com should not act upon the content or information without first seeking appropriate professional advice. In accordance with the latest FTC guidelines, we declare that we have a financial relationship with every company mentioned on this site.

Previous Post: Discover it® Credit Card Review: Cash Back, No Fees, Great 0% Balance Transfer Offers
Next Post: Small Acts Of Kindness Can Have A Large Impact Despite Minimal Cost