Fourteen years ago, my husband and I had our first child, and just three months after he was born, we bought a minivan. A Toyota Sienna, to be exact.

We planned to own the car for a while, especially since we bought it brand new, but honestly, I never thought that 14 years and 193,000 miles later we’d still be driving that vehicle. 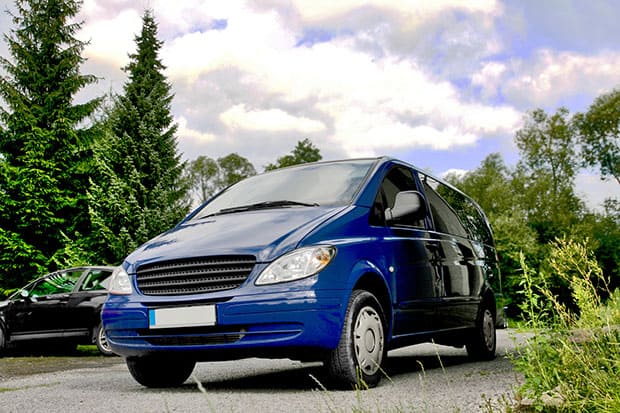 Let’s Hear It For A Paid Off Vehicle

We took out a five-year loan and worked hard to pay if off early.

We paid it off in four years, so we’ve driven that vehicle for the last 10 years without making a single payment.  The only expenses we’ve had are routine repairs, replacements, and requisite license plate tabs.

I’ll admit, now that the car is quite a bit older, it’s certainly not the envy of the neighborhood.

In fact, my kids, especially my older two who are 14 and almost 10, find it quite embarrassing.  However, it’s been a very reliable car, and we plan to keep it until it finally gives out completely.

Our van had one electric sliding door and one manual.  As is common for electric doors, ours stopped working at about year 10.  I didn’t want to pay the $1,500 plus that it would cost to fix it, so we just stopped using that door.

About two years ago, our passenger manual door outside handle became loose.  No biggie.  We just opened the driver’s side door, reached into the back, and used the inside handle to open the slide door.

Was that embarrassing?  Yes, but why spend money when the door did work, just not in a conventional way?

We joke that we’ll never wash the car again, and we probably won’t.  The dirt might be the only thing holding it together at this point!

A year ago we were at a manual car wash when the outside handle that was loose completely broke off.  That, even I can admit, was embarrassing. A motorcyclist was there, and he just stared at us.

My kids were so embarrassed.

When it broke off, we could no longer open the door from the inside, either, so we had to admit defeat and pay $700 to get that door handle fixed.

Surely, that was a fluke, right, and a car wash every now and then would be fine, right?  Right?

This summer, we again tried to wash the car at a manual car wash.  After my husband hosed down the car, I heard a loud pop, much like a gun shot.

I looked all around, but didn’t see anything.  Then, I started washing the car and the passenger window on the electronic door that does not work just completely shattered.  Glass filled our entire interior.

We had heard a rock hit the car a few weeks before when we were on the highway, and I think that weakened the window before the car wash.

The Air Conditioner Gives Out

This summer, our air conditioner gave out, which isn’t a good thing in the middle of an Arizona summer when temperatures routinely reach 110 degrees daily.  The problem ended up being two-fold, and we had to pay $2,500.

I can see the day is near when we’ll need to replace this vehicle, but I’m hoping we can hold out for a few more years.

After all, even with car repairs and routine maintenance, owning this vehicle for the past 14 years has been much cheaper than owning a newer model that needs fewer repairs but requires a monthly payment.

What is the longest you have ever owned a vehicle?  What finally made you decide to take the plunge and buy a new vehicle?  Are you comfortable with driving a car that others may find embarrassing just so you can save money?

Share16
Pin3
Tweet1
Share
20 Shares
Last Edited: 5th September 2018 The content of biblemoneymatters.com is for general information purposes only and does not constitute professional advice. Visitors to biblemoneymatters.com should not act upon the content or information without first seeking appropriate professional advice. In accordance with the latest FTC guidelines, we declare that we have a financial relationship with every company mentioned on this site.

Previous Post: 4 Tools To Automate The Management Of Your Finances
Next Post: 8 Low Cost Ways To Improve Your Home’s Appearance