The above is a bill I was faced with at the end of an otherwise enjoyable meal out with new friends. I was on a stricter than strict budget. Care to take a guess at which expense was mine? Hint: It was the single digit priced food item. I also passed up a cocktail in favor of the less spendy glass of iced tea. 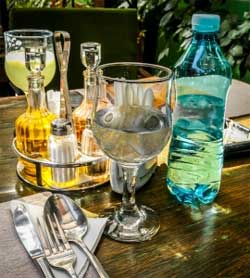 When the bill arrived, I pulled out my 20 dollar bill, expecting to engage in the usual price divvying and scuffling for change. My meal, pre-tax and tip should have added up to 10 dollars. But somehow, somewhere along the way, it was casually agreed that the bill should be split — and that the birthday girl shouldn’t have to pay. That meant a total of $131.50 would be split 4 ways. In an instant, I went from relaxed and carefree to fixated and frustrated. My careful attempts to reduce my food spending would be for naught.

Thirty-nine dollars — including tax and tip — was the damage to my bank account. For what? An appetizer and an iced tea. I should have spoken up, but I was embarrassed and uncomfortable when put on the spot to do so. Instead of voicing my concern, I paid the assigned amount (grudgingly), and then went home to seethe for the next several days (and evenings) while eating peanut butter sandwiches and sitting in a dark apartment. Needless to say, I never wanted to repeat that experience.

Going out to eat is fun but having to face the awkward moment when it’s time to split the bill is… not so fun. Barring those occasions when one person treats the whole table, I’ve rarely encountered a dining experience that didn’t involve a little dip in energy as soon as the bill was dropped at the table. But as with many so many other things, having a plan of attack can help you avoid feeling helpless if you’re dining out on a budget.

Here are a few tips to help you avoid getting stuck overpaying:

Be Your Own ATM

This one will impress all your friends – show up to the restaurant with cash in pocket. And even better, show up with cash in small bills. If you’re aiming to pay for your expense independently, then having the ability to put down your share – exactly, without having to make change – is just about the easiest way to do it. Tax and tip should be factored in and included into your share, of course. But having the small bills will give you the option to pay with precision.

State Your Intentions – The Earlier The Better

If you’re on a budget, it’s important to be upfront about your expectation to pay for your meal at cost, rather than splitting equally among the table. As soon as you’ve made your menu choice, let others know that you plan to pay for your order. Letting others know your intentions doesn’t have to interrupt the flow of the conversation, but make sure you’re clear. If you’re OK sharing your budget, mention that you’re nearing your spending limit for the month. If you’re uncomfortable sharing that information, let people know that you’ll be sticking to smaller ticket items.

Many people begin to blur the line of pricing when they feel properly cushioned by extra spending cash. A 15 dollar meal doesn’t seem much more than a 10 dollar meal. And 20 might not seem too far off from that. But when you’re watching your spending, those numbers most likely hold more weight. Don’t take it as insensitivity when people default to splitting the bill. In a perfect world, it is the easiest tactic to default to when eating out, but it usually results in someone paying a little (or a lot) more or less.

Point Fingers… At The Bill

If the person in charge of divvying the costs quotes a price that seems way too high, politely ask to see the bill, and point out the cost of your entree. Maybe they thought you shared the appetizer, or ordered a drink when all you did was eat out of the communal bread basket while munching on a house salad. It’s not about proving, or defending, it’s simply a numbers thing. The bill will back you up.

Unless you’re a math whiz, the idea of splitting up a bill, accounting for tip and tax, is a headache. I’m getting brain throbs just thinking about it. If you do want to figure it out in a more organized and streamlined way – there are apps for that. A few to check out to help you divide (fairly) and conquer the bill:

Of course, phone apps aren’t necessary, but they’ll make the math a little bit more streamlined than a pad of paper and a pencil:

What happens when you order food, but everyone else decides to order drinks as well? Especially at more expensive restaurants, a single glass of wine can cost just as much as an entree. It is absolutely OK to ask those who order ‘extras’ to offer up more cash. You weren’t invited to pay for their purchases, and they likely don’t expect you to.

To make the process smooth as possible (and give the server a break), you can request separate checks at the beginning of the meal. Some restaurants have a limit on the number of times a bill can be split. If that’s the case, ask to have drinks and food separated into two bills. It’s easier for people to contribute their fair share if they know what they’re paying for. Drinks tab, and food tab can be an easy way, though it will entail people go through two separate transactions.

For me, it took paying for a 39 dollar appetizer to find the courage to speak out come bill divvying time. But communicating your spending choices doesn’t mean deviating from social tact. Hopefully the tips in this article will help you navigate such situation and avoid having to learn this lesson the hard way like I did. And if you don’t think your friends will be open to splitting the bill, it might be a good idea to look for free fun things to do instead of eating out.

Share33
Pin2
Tweet25
Share4
64 Shares
Last Edited: 11th December 2020 The content of biblemoneymatters.com is for general information purposes only and does not constitute professional advice. Visitors to biblemoneymatters.com should not act upon the content or information without first seeking appropriate professional advice. In accordance with the latest FTC guidelines, we declare that we have a financial relationship with every company mentioned on this site.

Claire Murdough is a Bay Area native with an affinity for travel and food. You can find her work at a number of fine publications.

Previous Post: Want To Work In Retirement? It May Not Be As Easy As You Think
Next Post: Buying A Refurbished Computer Can Save You Hundreds Of Dollars