Ten years ago, my husband and I were living on shoe string budget.  Colleagues invited us out to eat, and we went with the agreement that we would order conservatively and not spend much money.  Our colleagues picked the Mexican restaurant, and I felt a sense of panic when we sat down and saw that the menu did not have prices marked on it.

We ordered modestly, we thought, but without prices, it was difficult to tell.  When the bill came, our portion before tip was over $50.  I wanted to cry right there because that was money we just didn’t have.

We never went out with our colleagues again.

We were living on one income (mine) while my husband was in grad school.  We had many bills and just couldn’t afford the price of entertainment that our colleagues could afford.

Should You Just Say No To Friends? 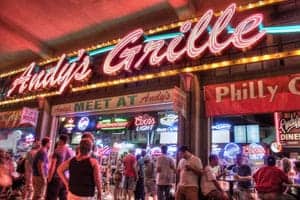 Turns out, we’re not alone in watching our social life dwindle while we tried to stick to our budget.

Yahoo even nicknames these individuals refuseniks for their determination not to spend money attending events they really aren’t interested in that can be quite expensive.

Joe Mihalic, the man who paid off $90k in Harvard student loan debt, wrote on his blog about dating on a budget.  Previously, “he was averaging about one or two dinner dates and one or two drink dates a week for a spend of about $150+/week or $600+/month.  Throw in a bar night or two or three with friends each week and an occasional trip” and he was “spending $1,000 to $1,400 a month on entertainment” (No More Harvard Debt).

Add it up, and over the course of a year, he was spending $12k to $16k on entertainment alone.  It’s clear why changing this and becoming a refusenik helped him achieve his goal of paying down $90k in debt in less than a year.

The Non-Financial Cost Of Saying No

Sure, saying no to friends, family, and even dates can help your bottom line.  If you don’t want to spend your money on events that don’t help you get ahead financially, being a refusenik might be just what you need to do.

However, there’s definitely a cost to saying no, especially to big events like weddings.

My husband and I didn’t go out with our colleagues again, and we did start to feel like we were missing out when they talked about the fun they had during the weekend.  However, the money we spent at that restaurant didn’t equate to the same amount of enjoyment, so we just accepted that we didn’t have money to spend as our colleagues did.

Altucher, the hedge fund manager who refuses to go to weddings, says, “I have lost friends because of it.  People do not get it.  And there is no easy way to break it to them” (Yahoo! Finance).

Mihalic, too, found that his dating life was affected by changing to frugal date venues such as having coffee at Starbuck’s or going on a hike.  He had to find girls to date who didn’t place worth on how much money he could spend on them, and he, himself, had to change.  “When I stopped throwing money around and stripped away all of those meaningless distractions and it became just two people walking together in the forest or sitting on a couch in Starbucks sipping on coffee, then stuff started to get real.  Personality became key, and I realized I had to be fun by just being me, and I couldn’t use money as a crutch” (No More Harvard Debt).

Whether you’re trying to pay down debt or just being mindful of your resources, you can feel free to join the refuseniks.  Just being aware that doing so will likely lead to social consequences.

Are you a refusenik?  What big event did you say no to?

Share9
Pin2
Tweet13
Share1
25 Shares
Last Edited: 13th May 2013 The content of biblemoneymatters.com is for general information purposes only and does not constitute professional advice. Visitors to biblemoneymatters.com should not act upon the content or information without first seeking appropriate professional advice. In accordance with the latest FTC guidelines, we declare that we have a financial relationship with every company mentioned on this site.

Previous Post: 4 Tips For Paying Off Credit Cards
Next Post: Peer to Peer Lending: Loving Your Neighbor With Your IRA