After World War II, the United States was in a place of tumult. Despite a courageous victory over the Axis powers overseas, the nation was still suffering from all sorts of problems at home. One of the largest of these dilemmas was the presence of poliomyelitis, commonly known as polio. In the early 1950s, the United States continued to experience outbreaks of polio that, per year, killed thousands and left tens of thousands of people crippled for life.

As a guy in his thirties, it is hard for me to imagine a viral infection having such an impact upon society. I am used to drunk driving fatalities and soldiers dying in the Middle East; these don’t faze me. But it is difficult to fathom that, while my grandmother was still an adult, tens of thousands of people nationwide came down with an infection that brought them to the brink of death and left many unable to walk from atrophied leg muscles. Even the 32nd President of the United States, FDR, was a victim of this ugly situation. Polio paralyzed him from the waist down for his entire professional career.

Dr. Salk Will See You Now 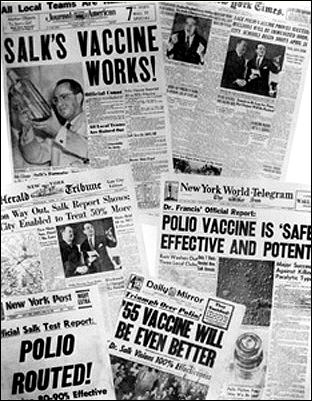 The situation would have continued for years without the work of a man few know of today, a scientist named Jonas Salk. In 1955 Dr. Salk invented the polio vaccine, an instant prevention of polio with the simple push of a needle. The press conference was broadcast live across radios throughout the country and Europe. In his book on polio titled The Cutter Incident, Paul Offit reports how, “Americans tearfully and joyfully embraced the results. By the time Thomas Francis stepped down from the [press conference] podium, church bells were ringing across the country, factories were observing moments of silence, synagogues and churches were holding prayer meetings, and parents and teachers were weeping. One shopkeeper painted a sign on his window: Thank you, Dr. Salk.”

The crazy thing is, Salk gave his invention away for free. In our modern age of pharmaceutical profiteering, such a gift is hard to fathom. Yet Salk valued his public service. He saw the struggle the nation was experiencing, saw thousands of good people dying or becoming crippled for life, and realized that the situation was too dire to do anything else. Cash flow must give way to consideration.

Our National Epidemic of Debt

In our country today, we are experiencing a similar oppression. Millions of Americans are living with ugly debt from credit cards and medical expenses. Around our country, children are going without adequate healthcare and school fees because of the financial hole their parents are stuck in. College, for many of these families, is simply out of the question, because the financial mountain that must first be crossed is simply too high. Across every race and state line, there are thousands upon thousands of families who are suffering from debt and looking for a way out.

Most people think there is little they can do to help. But did you know that there are investment accounts you can open that issue loans to help people get out of debt? I am referring to peer to peer lending. Companies like Lending Club and Prosper are wonderful new platforms that connect people who need loans to people with money to lend, and the vast majority of these loans are for people trying to get out of debt. 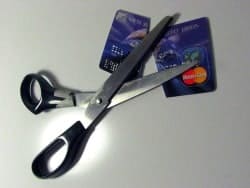 A peer to peer loan can mean a dramatic difference for someone struggling under credit card bills. This is because, when a person has five or six different bills coming to their house each month, there is a lot to keep track of. Secondly, the interest rates on these cards are often terribly high. Finally, these interest rates never come down, they remain high no matter how much debt is paid off.

A peer to peer loan, in contrast, is refreshingly healthier:

With the launch of these peer to peer lending platforms, investors like us have the option to help issue these healthier loans to families that need them. Incredibly, the lack of middlemen also means higher returns for lenders: my diversified accounts at Lending Club and Prosper are all consistently earning north of 12% each year. So, not only do borrowers get better interest rates, but investors do too. Everybody wins. And with the option to open a peer to peer lending IRA, you can make these earnings tax-free.

In 1954, Jonas Salk saw a nation in turmoil and realized he could something about it. I hope that a similar realization begins to spread across the country today. We have such an opportunity with peer to peer lending to do something good for people who need it. The only question is, will this asset class catch on and ring the bells of relief nationwide?

For more information visit LendingMemo.com. I have a well-written free eBook guide that explains peer to peer lending so anybody get understand it and get started themselves.

Share13
Pin
Tweet26
Share2
41 Shares
Last Edited: 10th February 2014 The content of biblemoneymatters.com is for general information purposes only and does not constitute professional advice. Visitors to biblemoneymatters.com should not act upon the content or information without first seeking appropriate professional advice. In accordance with the latest FTC guidelines, we declare that we have a financial relationship with every company mentioned on this site.

Previous Post: Just Say No To Friends, Family And Dates And Be… A Refusenik?
Next Post: Discover it® Credit Card Review: Cash Back, No Fees, Great 0% Balance Transfer Offers