The past few months have been a bit crazy as my wife and I have once again embarked on the journey of deciding that we wanted to move to a new home. Packing up your bags and moving to a completely new house and neighborhood isn’t a small decision to make, but it is one that we’ve now made.

Why are we moving? Because we have come upon an opportunity where my in-laws have purchased several lots in a nice wooded neighborhood, and have told us that they would build us a new home at a much reduced cost if we wanted to. My in-laws are home builders, and their typical builds are custom luxury homes, so we decided to jump at the opportunity.  Not only that, but mortgage rates are extremely low right now.

The only caveat with this whole deal is that we will need to sell our current house before we finalize an agreement with them on the new house.  We’re not particularly wanting to rent out our old house like some have done, so that means selling our current house first. My in-laws have agreed that they would build the home, and if we weren’t able to sell ours – they would sell the new house to someone else.  Let’s hope that doesn’t happen, we’re already invested in this place emotionally – they’ve already cleared the site to prepare for construction! 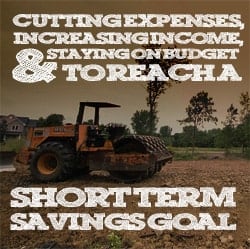 New Home Means Saving Up For A Down Payment

So now that we’ve decided to move forward on building a new home, we’ve been thinking the last few months about saving up for our house down payment.  In order to get 20% down on the new house and get the best rates we’ll need to start saving as much money as possible, as fast as possible.

For the house we’re looking to build a down payment should cost us somewhere in the neighborhood of $60-70,000.  We had already saved up a good portion of that before we made our decision, but we’ve still got a ways to go.   We’re also hoping that we’ll end up getting at least a little money back on our current home as we put down 20% when we bought that house. The only problem is that home values in our area have dropped precipitously in the last 6 years.  A house we bought for $273,000 6 years ago has probably dropped to a value somewhere in the range of $220-230,000, or possibly less. That’s the big “IF” in the whole equation.

In the past couple of months two houses very similar to ours sold in our neighborhood, one for $215,000 and one for $235,000.  So we’re banking on somewhere right in the middle after we pay all the costs.  So when all is said and done we’ll need to save another$10,-15,000 over the next few months.

Down Payments Means A Need To Cut Back Short Term

Because we need to save so much money in such a shortened time frame, I knew we would need to cut back as much as possible, and sometimes that would mean saying no to some things we may have wanted to do with friends or family. Definitely no vacations.

The last couple of months we’ve been finding as many places to save on our regular bills as we could.  We’ve downgraded some services and canceled others.  We’ve started using more coupons at the grocery store, buying more generics, making more meals from scratch and eating out less.

I’ve also been finding ways short term to make a bit of extra money.  I’ve been taking on more design jobs, and looking for ways to optimize and make more money with this site via ads, sponsorships and so on.  I’ll be revising and re-releasing my e-book talking about how to make money with a blog soon.

In short we’re hustling just a bit harder over these next few months to save and make those extra dollars.

Back To Our Old Tried And True Cash Envelope Budget 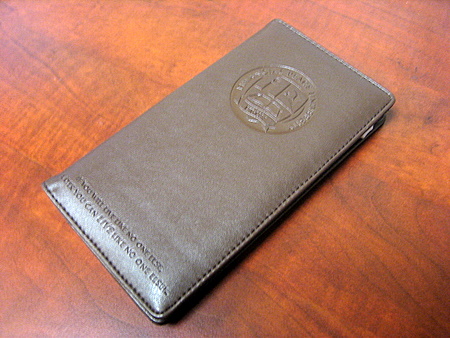 Beyond just trying to save more money and make extra money, I knew we needed to get back on a stricter budget. Over the past couple of years we’ve let our budget slip, not having the monthly budget meetings like we used to, and allowing our monthly grocery and dining out budget to balloon (Yes, we love to eat!). I was actually shocked to see how much we were spending on our food and entertainment spending when I looked in our You Need A Budget personal finance software.  Let’s just say cutting back in that area alone could have a positive impact on our savings goals.

A few years ago my wife and I took Dave Ramsey’s Financial Peace University course, and one of the takeaways from that course is how to use cash envelopes in order to curb spending.  You look at what some of your problem spending categories are, set a spending budget for those categories, and then don’t go over that budget.  How? By taking out cash on payday for those problem categories and keeping the cash in categorized envelopes. When the money in the envelope runs out, the spending stops!

We’ve been back on the cash envelopes bandwagon again for the past couple months and so far it’s been working really well.  We’ve stuck to our budget very well these first two months, even having a surplus this month. As a result we’ve been able to save hundreds more towards our savings goal.

So far things have gone well as far as cutting expenses and increasing income a bit.  The biggest impact that we’ve seen is in our areas of overspending where we’ve cut back by using cash envelopes.  Will it be enough to save up enough money in time?  We’ll see.  It partly depends on how much we save and partly on how much we sell our current house for.  If our house sells for less than we’re hoping (and expecting), we may have to get a bit creative.  I’m confident that we’ll be fine though.

Have you ever had to cut back and just say no to certain expenses in order to reach a goal?

Share14
Pin29
Tweet17
Share1
61 Shares
Last Edited: 28th February 2013 The content of biblemoneymatters.com is for general information purposes only and does not constitute professional advice. Visitors to biblemoneymatters.com should not act upon the content or information without first seeking appropriate professional advice. In accordance with the latest FTC guidelines, we declare that we have a financial relationship with every company mentioned on this site.

Previous Post: Rising Food Costs Have You Down? Here Is How To Fight Back
Next Post: Top Online Personal Finance Management Software To Get Your Budget Back On Track